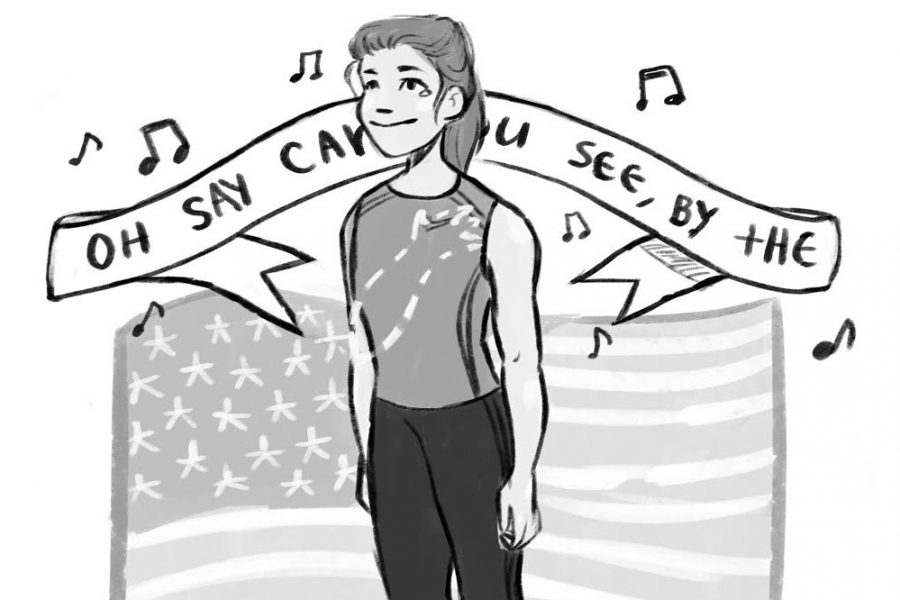 I’m proud to be an American. I may not agree with some of our policies or voice undying support on a regular basis, but deep down inside I am glad to say that I’m an American. However, it’s situations like those of Colin Kaepernick, Megan Rapinoe and Toni Smith-Thompson that make me frustrated with this country. Many condemned these athletes for “disrespecting the flag” even though these athletes have every right to voice their opinions. Many fans, professional athletes and political figures have even criticized them for being “un-American.”

Athletes should not be considered “un-American” for protesting during the national anthem. We all have a right to freedom of speech and expression, and these athletes are using their fame to begin conversations regarding important issues in America — they should not be shamed.

San Francisco 49ers’ quarterback Colin Kaepernick may be the most recent athlete to protest during the national anthem in regards to police brutality, but this is not an uncommon platform through which athletes to spread awareness about controversial issues. In response to the poor treatment of African-Americans in the 1960s, Tommie Smith and John Carlos protested in the 1968 Olympics. While many American viewers saw Carlos and Smith’s all-black apparel and raised fists during the playing of “The Star-Spangled Banner” as outrageous and unpatriotic, viewers from around the world were amazed to see how two high profile figures in American athletics countered the American belief that our nation is perfect.

“We were just human beings who saw a need to bring attention to the inequality in our country,” Smith said in a documentary on the 1968 Olympics. “There was nothing but a raised fist in the air… acknowledging the American flag — not symbolizing a hatred for it.”

Carlos and Smith, like many other athletes who have protested during the national anthem, did not behave in a way that should be considered treason. As per the first amendment, these athletes have a right to freedom of speech and expression and are using this right in order to bring awareness to controversial issues in society. These athletes mean no harm in their silent protests and therefore should not be considered threats to our nation or shamed for standing up for their beliefs.

After turning her back away from the American flag in protest of the war in Iraq and the American prison system in 2003, basketball player Toni Smith-Thompson received much criticism. Although she was just a college student at a relatively unknown college, she received an immense amount of backlash from her teammates, classmates and citizens across the country.

“I’ve received death wishes and death threats and… reporters calling my dorm. Most of my team and I are not on speaking terms,” Smith-Thompson said in an open letter addressed to Kaepernick.

The tension surrounding this situation is evident because so many people acted so negatively towards their actions. Many Americans were so upset with Smith-Thompson, Carlos, Smith and Kaepernick that they felt it was necessary to personally threaten these athletes. Whether it’s the angry Twitter user burning his or her Kaepernick jersey or the unhappy fan yelling at Smith-Thompson on the basketball court, people have been quick to brand these athletes as “un-American” simply because they deviated from the standard routine for the national anthem.

Are we Americans so prideful that we cannot even admit that there are actually flaws in our country? It’s understandable that people are not happy with the way these athletes choice to vocalize their opinions. However, these athletes are not trying to disgrace our nation. They are trying to remind us of the reality that our nation is far from perfect and they should not be shunned because they are trying to bring awareness to social issues. The fact that so many people have been quick to accuse these athletes of being unpatriotic shows how we, as Americans, cannot handle criticism about our country.

The portrayal of Kaepernick’s protest by the media has made his actions less about the issue of police brutality and more about how he is being exiled by various members of the football community. These “un-American” actions have been unsuccessful in getting people to pay more attention to important issues because people seem to be more concerned with proper patriotic etiquette than the issues presented. It is our responsibility, whether we’re athletes or spectators, to at least listen to what these professionals are trying to bring awareness to and not be so blinded by our pride for the country.  We are not a picture-perfect nation and these silent protests remind us to be more grounded and continue discussing of important social issues.

I’m proud to be an American. Most of the time.