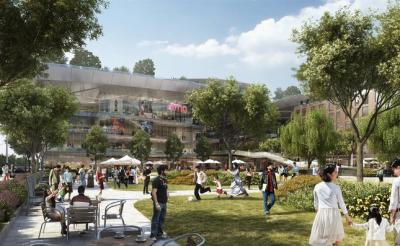 Entertainment options like the current AMC movie theater will be retained at the new Vallco project. Sand Hill Property Co. plans to also keep the bowling, fitness, ice skating and banquet venues as part of project.

The city of Cupertino is no stranger to change. It has been Apple’s home since the company’s inception and expanded and developed along with the company. Since 2000, Cupertino’s population increased 6.97 percent. To put that in perspective, since 2000, Los Altos has had a population growth by 3.9 percent, and San Francisco has had a growth of 3.99 percent. Along with the major increase in population, Cupertino is now getting ready for two more major changes: the construction of the Apple Campus 2 and the renovations of the Vallco Shopping Mall, which may help to create a solid center for the city.

The Apple Campus 2 project was approved by the Cupertino City Council on October 15, 2013; however, delays caused the start of construction to be pushed to 2014. The 175-acre plot was previously owned by Hewlett-Packard (HP), but following the project’s approval, the 2.65 million square feet of HP office, research and development buildings were demolished to make way for 2.8 million square feet of Apple office, research and development buildings. The project also includes the construction of a 1,000 seat corporate auditorium, a fitness center, a central utility plant and associated parking.

Apple released a promotion video via the Saintel Daily on April 22, 2014. The footage includes a miniature model of the new campus, computer-generated imagery of the completed campus and other shots of the surrounding area. The campus, shaped like a large ring with a green park inside, could easily be compared to a spaceship. This structure prompted an interesting comment at a 2011 city council meeting: “Definitely, the mothership has landed here in Cupertino.” The audio consists primarily of comments from a variety of people involved in the project, such as architects Norman Foster and Stefan Behling. Other voices include Senior Arborist David Muffly and Vice President of Environmental Initiatives Lisa Jackson.

A main focus of the new campus is its environmentally friendly construction. Project coordinators aim for the facility to run entirely on renewable energy from solar power. Ideally, the facility would have zero greenhouse gas emissions. Furthermore, the landscaping is going to include native species in order to, in the words of Muffly, “bring California back to Cupertino.”
Construction on the campus is set to be completed by late 2016 or early 2017.

The Hills at Vallco

Vallco Shopping Mall is currently owned by the Sand Hill Property Company, which is proposing a plan to renovate it into a new walkable neighborhood with a 30-acre green roof, the largest in the world. Rafael Viñoly Architects, founded by Uruguayan architect Rafael Viñoly, and OLIN Landscape Architects, an urban design company, have been selected as the chief designers for the project.

The company launched a website, thehillsatvallco.com, for all details related to the renovations. Within it are detailed descriptions of the potential renovations, news, a photo gallery and links to become involved or follow the progress of the project. Aside from the main shopping center area, the renovations will encompass 800 square feet of apartments, a farmers market, a variety of stores and 2 million square feet of offices within the 30-acre park with running trails, vineyards, orchards and gardens. Furthermore, all of the landscaping will include drought-tolerant plants watered with recycled water, and the green roof will assist in keeping the neighborhood at a low temperature.

As for transportation, the design is proposed to connect with the surrounding community with a private shuttle, sidewalks and bike paths for the prioritization of pedestrians and bicyclists.

The project is approximated to cost $3 billion, and the proposal will likely go up for review by the city council by the summer or fall of 2016.