As Hannukah comes to an end, I would like to talk about the very best part of the holiday: latkes. For all of you who don’t know what latkes are, they are delicious potato pancakes served at night; so basically, hashbrowns for dinner. As per Jewish tradition, they are served with applesauce and sour cream. I know what you must be thinking, that sounds slightly revolting. But trust me: it is the perfect combination.With latkes also come the less than delicious smell of oil and onions that remains in your house for weeks on end. However in my opinion, they are totally worth it.I hope you have a chance to try out these potato pancakes! 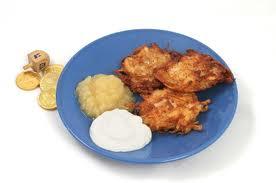 Recipe is as follows:

Makes: Six latkes (in my family, we triple the recipe to feed around four people)

Directions:
In food processor, place all ingredients and ⅓ of potatoes and chop (not too fine)
Add remaining potatoes ⅓ at a time
Over heat, fry in oil