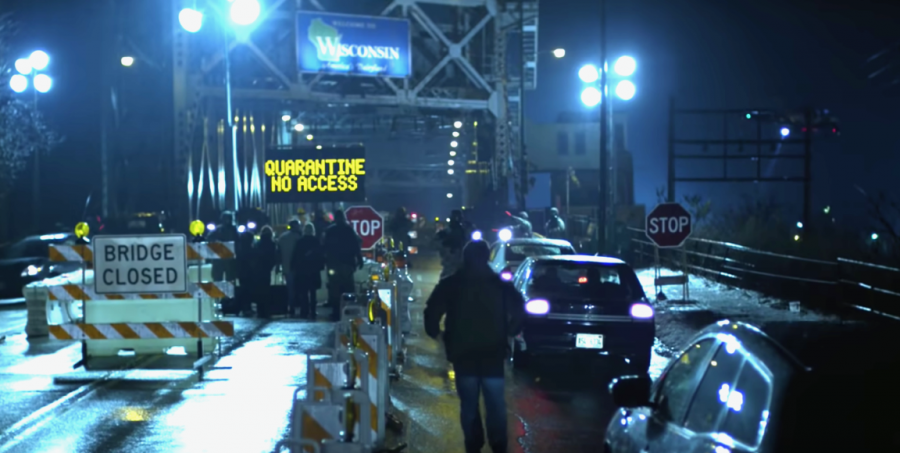 Mitch Emhoff (Matt Damon), along with many others, attempt to cross the border between Minnesota and Wisconsin, only to be forced by the National Guard to turn around and go back into quarantine. “Contagion” holds many parallels to the current COVID-19 pandemic, and offers lessons we can learn from.

The 2011 Steven Soderbergh hit starring Kate Winslet, Jude Law, Gwyneth Paltrow, Matt Damon, Laurence Fishburne and Marion Cotillard follows the CDC, WHO and health care professionals as they race to find a cure to a pandemic which is wreaking havoc on society.

While the movie’s death toll by day 35—26 million—is not comparable to COVID-19’s death toll of 2,700 at day 35, the anxiety about the unknown has become an eerily familiar feeling for most of us just in the last few weeks. By the end of the film, the viewer sees the streets of cities like Atlanta, San Francisco and Minneapolis, covered in trash and lined with army vehicles. And similar to what we’re already seeing, the film shows empty shelves at grocery stores, empty airports and healthy people self-quarantining themselves.

The reason why this film feels so real is in the accuracy of the development. The movie’s screenwriter, Scott Z. Burns, conducted months of research into the science of pandemics and hired epidemiologists to create a realistic plot and script, as well as properly train the actors to portray health officials, doctors and scientists. In addition to the virus itself, Burns makes the villain of the film a freelance journalist (Jude Law) who advertises a fake cure for the virus on his blog and gains many viewers as people grow desperate for answers. Through this character, Burns effectively depicts the human tendency to panic and scapegoat as a result of society becoming entirely absorbed by the unpredictability of this deadly virus.

This movie mirrors reality in more ways than one. Scientists believe that COVID-19 originated from bats and, in the film, the virus emerges when a bulldozer knocks down a tree containing a bat’s habitat. The bat then flies over a pigpen, dropping a piece of food. A pig eats the scrapping and is later slaughtered to be prepared by a chef who, after merely wiping his hands on his apron, shakes hands with Paltrow’s character in a casino, transferring the virus to her.

With the destruction of the bat’s habitat, Burns exemplifies how deforestation and the destruction of animal habitats can make these deadly viruses more plausible. Additionally, the fact that the virus spreads from Hong Kong to Chicago and Minneapolis in a matter of hours reveals how global travel can very quickly turn diseases into pandemics that are nearly impossible to contain. And we saw the same with the coronavirus as, in just a matter of weeks, it heavily affected Asia then Europe and North America.

There have definitely been moments in the last few weeks where I’ve thought we were being too paranoid. I was upset and confused when the talent show was canceled. I thought it was ridiculous when Palo Alto High School’s senior prom got canceled, and I laughed at my parents when I came home to find a large bottle of Purell in every room of our house. I finally began understanding the precautions when I got to the scene in “Contagion” where a character in the movie tells Winslet’s character, “My wife makes me take off my clothes in the garage, and then she leaves out a bucket of warm water and soap. And then she douses everything in hand sanitizer after I leave. I mean, she’s overreacting, right?” To which Winslet responds, “Not really. And stop touching your face.”

This situation sucks. There’s no denying that, but the bottom line is this: This pandemic will not harm me or, most likely, you. But we still need to self-quarantine and take other precautions for our parents, grandparents and peers dealing with pre-existing respiratory issues. Yes, this is a fictional movie, but every day it becomes more of a reality. Go back to the basics: watch Dr. Oz explain the proper way to wash your hands; try not to touch your face; have hand sanitizer on hand; and avoid crowded metropolitan places.

Be smart, not selfish—take advantage of the resources you may already have available to you and remember why you’re doing this.