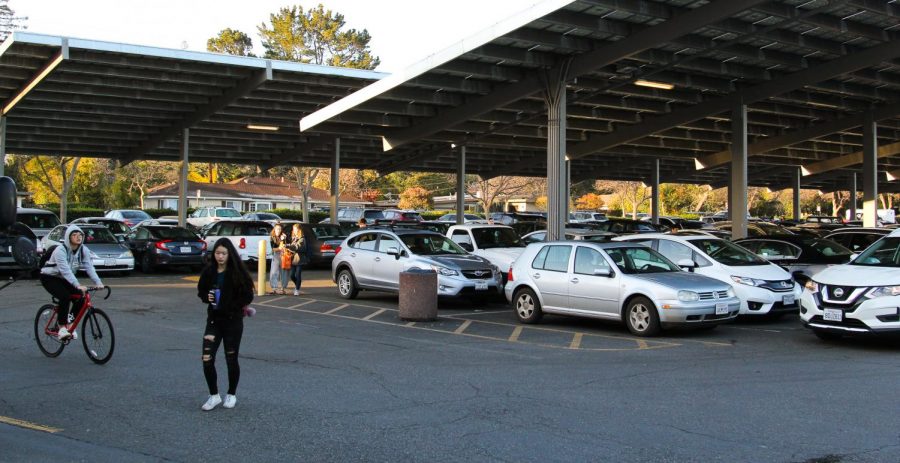 By Daniela Gloster and Janie Dent

The recent loss of 25 parking spaces in the front parking lot has impacted student parking availability. A portable construction office was placed in the back of the parking lot over February break in preparation for the construction of a new two-story building in the 600 wing. Combined with existing problems with regulating parking, the construction has caused some students who hold parking permits to be unable to find parking in the lot. The administration is working to find solutions to the shortage.

“I circled the parking lot trying to find parking when I got to school at my normal time, but I couldn’t find parking,” senior Maddie Jun said. “I had to drive a few blocks away, park my car there and walk to class so I was very late.”

The construction of the two-story building is part of the seven-year Facilities Master Plan funded by Measure E bonds. The Mountain View-Los Altos Union High School District (MVLA) intends to use the Measure E bonds to expand and improve high school facilities across the district, such as cafeteria expansion and library modernization. The portable office in the parking lot will be used to oversee the construction of other portables that will be placed on the empty asphalt lot next to the track. Once finished, these new portables will house classes that will be displaced by construction.

Student parking availability will continue to fluctuate throughout construction. The 25 spots that have been lost will be returned to the parking lot before the end of the school year. However, roughly 30-40 staff spots on the East Drive by the 500 wing will be lost next year as construction of the two-story building continues. Staff will have to park in the student lot, further decreasing student parking availability.

Roughly 200 parking permits were given out this year, with approximately 170 student spots currently available in the lot. In preparation for construction, 40-50 student spots were redesignated as staff spots at the beginning of the school year and student permit distribution decreased accordingly. In order to make more space for ongoing construction, fewer student parking permits will be given out next year than in both this year and previous years.

Green Team collaborated with the Los Altos administration at the beginning of this school year to create a new permit eligibility program in order to reduce carbon emissions. Eligibility is based on seniority and a student’s distance from the school. Currently, anyone living within the area enclosed by El Monte Avenue, San Antonio Road and Marich Way is ineligible to receive a parking permit. In response to the future parking shortages, the administration and Green Team may choose to increase the radius of ineligible students next year.

“I think the [policy] changes that we implemented this year worked out pretty well,” assistant principal Galen Rosenberg said. “Part of the reason was also to encourage more students to bike or walk rather than drive. It’s kind of an anti global warming effort. But we may need to alter the policy based on the number of spaces available.”

An increased ineligibility radius next year would decrease the number of permits Los Altos distributes to ensure that the majority of students with permits are able to find parking regularly. However, the administration will still aim to provide permits to the majority of seniors who apply.

The decrease in parking permits handed out this year in anticipation of the construction also led to an increased price of $50 per permit—up from $40 in previous years. The price may increase by a few dollars next year to produce permits that cannot be counterfeited. The money raised from the sale of parking permits goes to ASB.

According to Rosenberg, the administration has found regulation of the parking lot to be difficult. Parents who park in the lot to drop their students off before school and students who park with counterfeit permits or without permits contribute to the issue. To counteract these problems, Los Altos has asked the Los Altos Police Department to increase the frequency of ticketing in the parking lot, but the department currently checks the lot only around once a week. The Los Altos Police Department declined to comment.

The administration issued an announcement on Tuesday, March 12 that the school is now implementing its own parking regulation system as a further attempt to curb illegal parking. The system has a warning system in which the first parking violation results in a written citation and a second infraction results in the violator being unable to apply for a permit the following school year.

While the administration states that parking permits give people the ability, not the right, to park in the lot, they are nonetheless continuing to search for more potential solutions to minimize the spot shortage. The administration is also considering asking the city of Los Altos to temporarily open up more neighborhood streets for public parking.