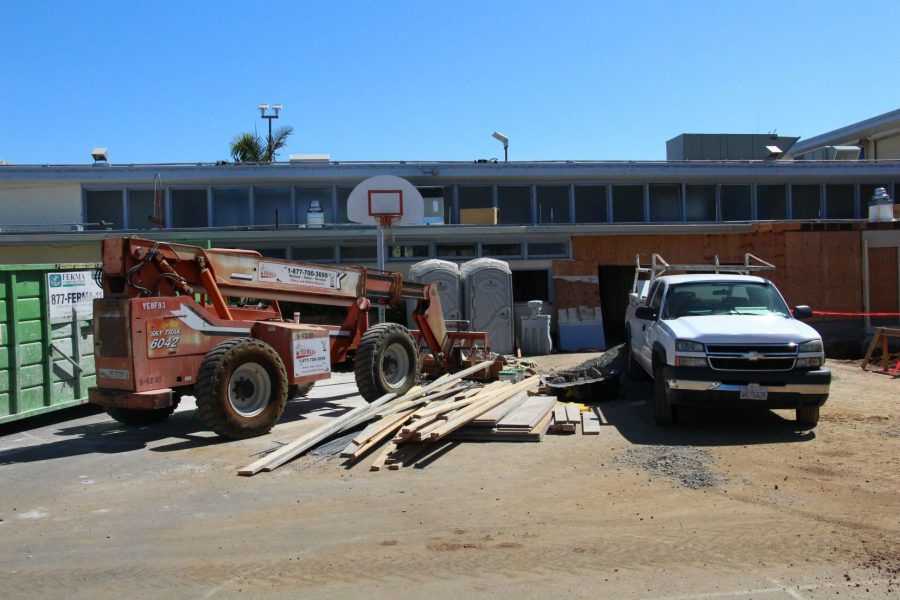 A view of the construction on the girls locker rooms. The P.E. department is undergoing several changes including a new wrestling room, locker room and fitness room. Photo by Andrew Young.

Over summer break, Los Altos engaged in a series of extensive renovations focused on maintenance issues and athletics facilities. While updates to library furniture and the East Drive, the road extending from the staff parking lot to Jardin Road, have been completed, construction of new locker rooms and modifications to other parts of the athletics department will not be completed until September 30, while the new fitness room will be finished by December.

In the meantime, P.E. classes and fall sports will operate out of temporary replacement trailers between the 700 wing and football bleachers, which will include makeshift changing areas delineated by chairs alongside desks for coaches and teachers. Delays affect modifications to the locker rooms, dance room, wrestling room, team rooms and coach offices.

“We’re bringing in two construction trailers, which will have an office inside so that the teachers can sit there with a table and a computer,” Associate Superintendent Mike Mathiesen said. “We will bring in chairs and put them around the edge of the wall and really it becomes a private changing area for the P.E. classes as well as after school sports.”

The school plans to replace worn out tile in the showers and add new flooring to the locker rooms; however, because the construction crew found parts of the flooring and tiles were covered over by multiple layers instead one layer, it will require extra time to replace.

“The short way to [explain the delays] is ‘unforeseen conditions,’” Mathiesen said. “For some issues in a renovation project, you don’t know what’s really under the floors until you actually get in and start digging away there.”

For summer water polo practice, the lack of locker rooms forced players to change on the pool deck or one at a time in the water polo shed by the pool. Players were also frustrated by the lack of showers and restrooms.

“If you had to hurry after practice, you could shower in the locker rooms and avoid… the chlorine stink lingering on you for too long,” senior Margo Lusinchi said. “Now when we have those dreaded morning practices we won’t even be met by a warm shower.”

Once finished, the renovated locker rooms will include updated showers, bathrooms, lockers and the addition of two team rooms. Boys’ water polo coach Seth Tasman believes the wait will be worth it for the updated facilities.

“We are very excited about our brand new locker rooms, so we’re patient [and] we’ll make it work with whatever we have,” Tasman said. “We were using the pool all summer, and it wasn’t an issue.”

When the fitness room is finished in December, it will contain new equipment to allow for more physical activities and electives not covered by the current P.E. curriculum.

“We would like to add an elective such as a lifetime fitness class,” P.E. teacher Kiernan Raffo said. “We hope to get squat racks and make [the fitness room] more user friendly for the students by adding more updated equipment like rowing machines.”

The school will also be adding extra P.E. storage space, new coaches’ offices and new wrestling rooms, all of which are also expected to finish September 30.

“There is going to be more storage for P.E. because we have so much equipment like the ping pong tables that is really hard to store,” Raffo said. “We were really crammed [last year].”

While delays to locker room renovations will hamper students in P.E. and fall sports, the school was still able to finish other construction projects around campus.

“Most of the projectors were five to six years old,” Mathiesen said. “Instead of a projector projecting on a screen or a whiteboard, the solution was to purchase a giant monitor for each classroom. We want to try to standardize and be sensitive to certain types of curriculum.”

The library received new furniture and carpeting, and additional seating was created using bookshelves as chairs. Small study areas with whiteboards were created for students to collaborate.

“Usually the library is used as a study area, and we wanted to adapt that space,” Mathiesen said. “We added partitions with whiteboards to create study areas. The whiteboards will let students write without vandalizing school property.”

Maintenance like repaving, repainting, adding LED lighting and adding traffic directions and lighting to the East Drive was also finished over summer.

The school updated the pipes along the East Drive in an effort to address an ongoing problem dating back to 1985. Previously, because the entire water system was connected, shutting off one valve would compromise the entire system.

“The problem was if we wanted to do repairs and turn off water in any part of the school, turning off one valve would make us shut off water for the entire campus,” Mathiesen said. “By addressing this problem we can isolate [future leaks] to only one wing.”