Composing a future with Michael Wang 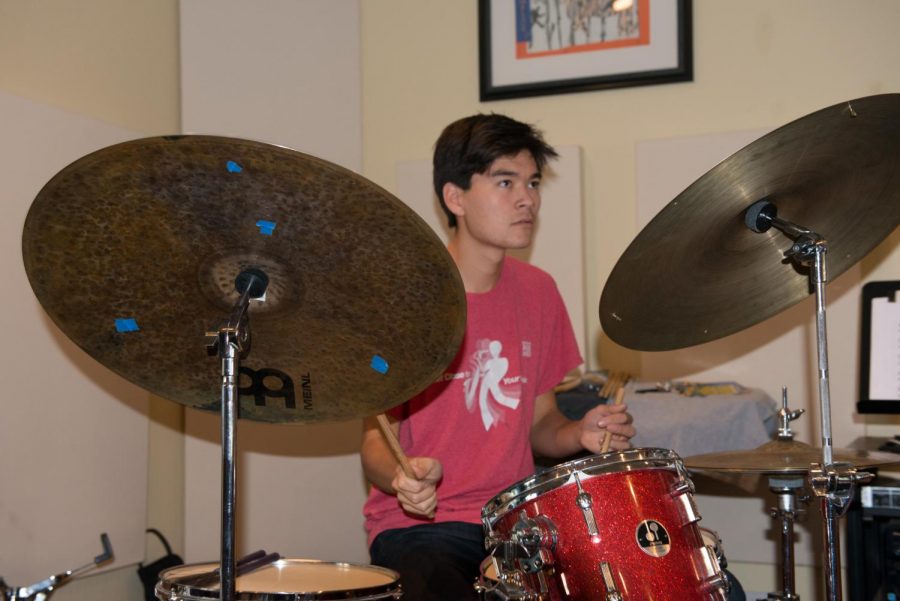 Senior Michael Wang has chosen to pursue a career path not often taken in Silicon Valley: music. This year, Michael was accepted as a drummer into the San Francisco Jazz High School All-Stars program, one of the most prestigious and selective music programs in the Bay Area. With 20 to 25 of the best teen jazz musicians in the Bay Area, Michael gets to travel throughout the country to compete at music competitions.

Michael has played in out-of-school bands like the Stanford Miles Ahead Big Band and the Stanford University Jazz Orchestra. More than getting into the San Francisco All-Stars program, Michael was also chosen to be part of its Elite Combo. Along with performance, the octet focuses on writing original compositions, and it is led by renown saxophonist and composer Dann Zinn.

With all the talent that Michael has built through drumming, senior year pushed him to make a difficult decision: should he let go of drums and focus on academics, or should he follow his passion?

“The last six months, it definitely has been hard because everyone around me is going into [computer science] or engineering or an English major, all things that we’ve been learning in school for the last 12 years,” Michael said. “But on the other hand, I’ve had a secondary interest that’s always been an extracurricular thing, but now it’s turning into my main thing…”

“Having no role models in front of me has definitely been scary. I’m going out there and doing something that no one else in the school has done, and so it’s a little bit scary.’”

Although music started as a hobby in elementary school, Michael developed a passion for it through playing a variety of instruments as he grew older, like the piano, rock guitar, viola and drums. He started playing viola in elementary school and transitioned to being the lead singer and guitarist in his own rock band in middle school.

“People enjoy things that they’re just good at, and that’s probably one of the main reasons that I stuck with [music] and branched out to new instruments,” Michael said. “Every new piece of music that I heard, every instrument that I learned how to play just made me more excited to keep going. [My passion] kind of fed itself a little bit.”

Though Michael developed a wide range of skills in the music department, he narrowed his focus to the instrument he knew best: the drums.

“The jazz band needed a drummer and I was really into a drumming, it was kind of like a phase that I was going through,” Michael said. “I got into drumming and when I got into playing jazz… jazz drumming became what I did.”

Michael credits his development and hours of practice on the drum kit to a dedicated focus that grew with his maturity. The biggest factors to his improvement have come from three things: listening to music, practicing on his own and playing with others.

“I try and practice the drum set for an hour every single day, even if it’s super hard,” Michael said. “I didn’t really start doing that until a year ago, and it’s definitely escalated my playing. I think it just came with maturity of being able to sit at the drum kit for that long and stay focused, because it’s not something that I used to be able to do until now.”

To Michael, playing the drums is not about the music he plays as an individual, but the role he plays in the band. Drums are often seen as the backbone of a band, keeping the time and melody of the song in place for the other instruments.

“I like music in general, listening, playing, writing, dancing,” Michael said. “The drums just happen to be the way I can best contribute to a group of musicians not because I particularly like it the most.”

Michael has connections to other jazz musicians throughout the Bay Area, who he often meets up with to play with. He owes a lot of his ability to one of his teachers, Akira Tana and Los Altos alumnus, Mikailo Kasha ‘15, both of whom have helped him make connections to the jazz community.

“A lot of people don’t have the drive, motivation comes and goes, but he really wants to do this,” Kasha said. “I think a lot of people in that age group don’t really care about jazz… He’s definitely got that drive which is unique, and that’s what’s necessary to make it.”

Though slightly apprehensive, Michael is excited to take on jazz as a career. He embraces the challenge of pursuing his dreams in a field known to be harder to make money.

“People think of the arts as being an easy way out and if that’s what you’re going to do in college, you’re not gonna make a whole lot of money,” Michael said. “But I almost see it like a challenge, it’s hard to make money, but I’m going to be happy doing what I’m doing.”