Competition and Precision with Jamie Baum 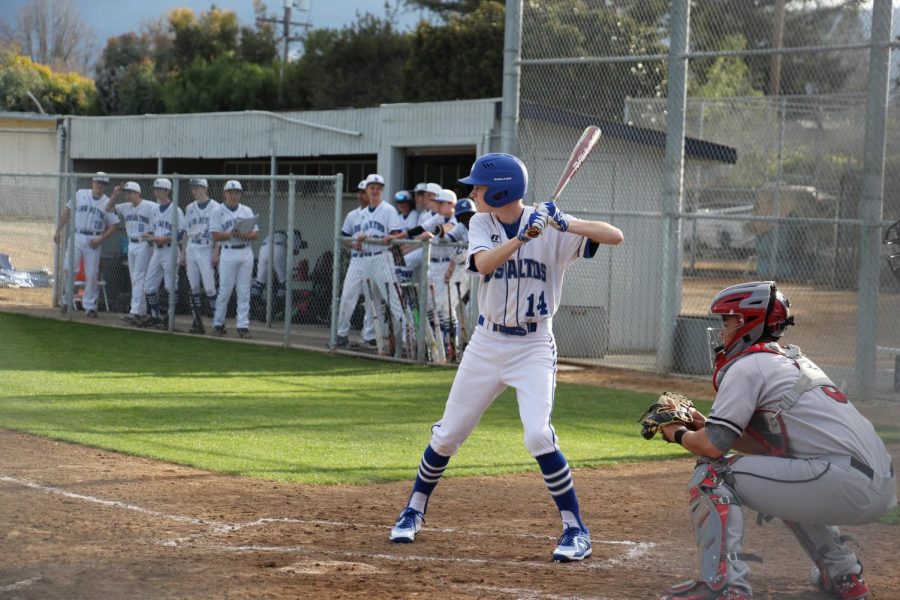 By Jocelyn Maeyama and Julia Santos

As freshman Jamie Baum prepares to face off against a rival pitcher, she takes a step outside the batter’s box and takes a practice swing to get the nerves out. Stepping back into the box, she stares down the pitcher. As the ball screams past the plate, she sends it flying into right field.

Jamie’s notoriously difficult to strike out, thanks to her well-defined sense of the strike zone and her ability to switch hit, giving both right and left-handed pitchers a tough time. And she has the stats to prove it: in her past year playing in the Little League Junior Baseball Division, she never struck out — the only player on her team to have done so.

Jamie began playing baseball because of her older brother, junior Ryan Baum, who plays on the varsity baseball team. She started off playing catch with him and her parents and fell in love with the sport. When she was five, she played on her first organized team.

“I like the feeling of hitting the ball on the sweet spot and the pop when you catch the ball right in the pocket,” Jamie said.

As they grew older, Jamie learned from Ryan and pushed herself to compete on his level, which would eventually land her a spot on the top half of the Los Altos frosh soph baseball team.

“I always want to be better than him in everything,” Jamie said. “We practice a lot together, and he gives me good tips and I’ve started listening to them.”

Jamie doesn’t want to be the best girl on the team — she wants to be the best player on the team. And her competitiveness is one of the first traits people notice about her. Little League Junior baseball coach Sam Stewart noticed her potential to be a great baseball player because her determination and drive to win were qualities that made her stand out among the other athletes.

“When you’re in a competitive environment, you want to win,” Stewart said. “I think that’s how she was raised. I think it’s a testament to her family, they compete because they don’t like to lose. It’s a really good trait that she has.”

Even while warming up before fielding during games, she’s meticulous in focusing on her fundamentals. Jamie plays shortstop and second base in addition to pitching, and at her first practice for Juniors, Stewart remembers thinking, “That’s probably our starting shortstop.”

“She can make plays that people who are faster or quicker or may have a better arm aren’t able to because she has really good footwork,” Stewart said. “She rarely doesn’t feel the ball cleanly, even in between hops or if she’s on the run, because her hands are so good.”

Jamie’s wicked curveball and knowledge of the strike zone lead to her success on the mound. While she may not have the hardest fastball, she still works to make sure she can strike out as many batters as she can with the skill set that she has. Many younger pitchers who can throw impressive fastballs only focus on throwing as hard as they can, while Jamie already understands how to upset the timing of a hitter to get them out.

One of Jamie’s idols is Giants shortstop Brandon Crawford, whose success at being a standout fielder and ability to get on bases despite not having the most power behind his swing mirrors her own style of play.

Many girls face social isolation on their baseball teams, but as Jamie continued her baseball career, she didn’t face any discrimination and grew closer to her male teammates. Some, like freshman Blake Brinsfield, she’s been friends and teammates with since fourth grade.

“She’s going to pick you up if you make a mistake, and she’s going to motivate you to be better than you are,” Blake said.

In eighth grade, Jamie played for her middle school baseball team. While many girls in baseball feel pressured to switch over to and stay in softball, Jamie quickly returned to baseball. As a pitcher, she missed the pitching style of baseball and didn’t feel the same strong bonds as she did with her teammates on the baseball team. She also felt that softball lacked the competitive atmosphere that helped her thrive in baseball and after the season ended she was eager to get back to baseball.

As Stewart puts it, “She’s not a girl who plays baseball. She’s a baseball player, and she belongs on the field.”  And JV head coach Bryan Edwards agrees.

She tried out like every other player, and Edwards evaluated each athlete looking for three things: attitude, effort and talent.

“She is very coachable, she works her tail off and her natural talent is above average,” Edwards said.

After making the final cut, Jamie proved she is a key player on the team. She’s earned a spot starting first off the bench and in the rotation for pitching.

The season is just starting, but Edwards sees a lot of potential in Jamie now and in the future. Coming in as a freshman, Jamie’s increasing consistency on the field and growing game IQ already seem on track for making the varsity team next year.

“[Making varsity next year] depends on if she gets stronger,” Edwards said. “But as far as her baseball skills, if those continue to get better, I see no reason why she couldn’t play at the varsity level — at least make the squad and then see what happens.”

In the summer, Jamie will participate in the tryouts for the U.S. Womens baseball team to see where she stands among the best women’s baseball players in the country. She’s ineligible to make the team now due to age, but she sees herself playing on the team in the future.

For now, Jamie will continue to hone her skills with the Los Altos JV team. She’s working on her change-up and two seam pitches, and taking each game one play at a time.