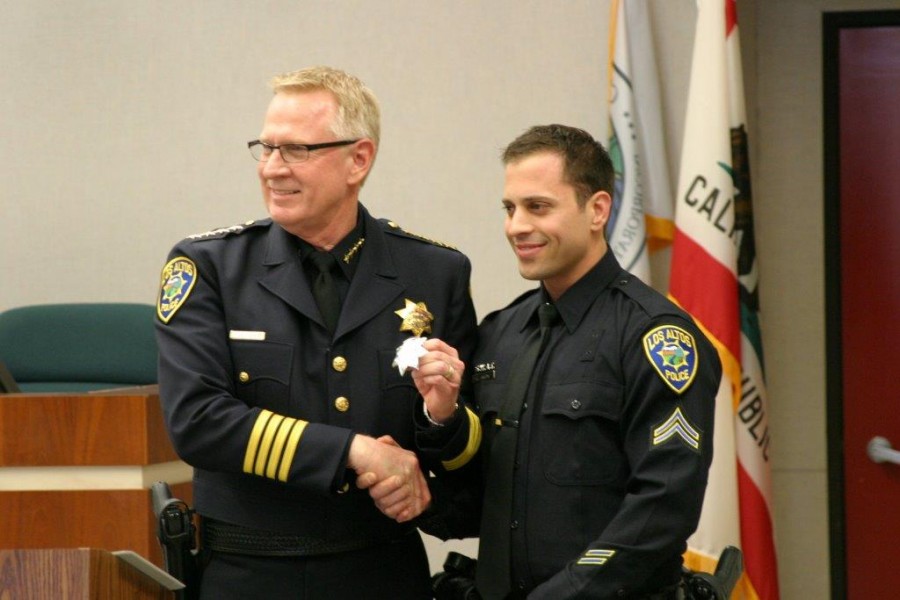 For many students, it is not too uncommon to see a police officer walking throughout the campus, nor is it too uncommon to wonder why we even have law enforcement personnel at our school. But rest easy — the officers at our school aren’t here because of some unknown security threat. Rather, they serve as a resource for the entire school body.

In September 2015, Police Agent Ryan Langone was appointed the School Resource Officer by the Los Altos Police Department (LAPD) after the previous officer, Agent Katie Krauss, left. School Resource Officer is his full time position at the LAPD, and Langone spends his workdays visiting local schools and responding to various calls from people in the area. It is his job to keep an eye on all of the local schools and answer any needs they might have with the police department.

Apart from responding to calls and mingling with the community, Langone also teaches classes to elementary and preschool students on safety and other typical police duties. Starting January 2016, he will lead the Drug Abuse Resistance Education (DARE) program, which educates students about illegal substances at the private schools in the area, where he also works as the the resource officer.

“The Los Altos Police Department teaches DARE to the private schools in Los Altos,” Langone said. “That is why I also absorb those schools as well because I teach them the 10-12 week program of DARE.”

Before being named our Resource Officer, Langone spent nearly a decade serving for the LAPD. His experiences in the police force range from running the graveyard shift on the night patrol, to being a general Public Relations person for the department to even being assigned on the SWAT team for the Mountain View-Los Altos area. Langone’s time on the force has given him an experienced perspective on law enforcement.

“I was the union president for a portion [of the time] that I have been here,” Langone said. “I’ve also been assigned to the county auto theft task force, where I was a plain clothed detective, driving an unmarked car in east side San Jose arresting parolees, jumping fences, getting a lot of guns, arresting people who are wanted for murder.”

Becoming a police officer was never a goal for Langone, it ended up a happy coincidence. As a teenager, he lived in San Jose and attended Leland High School. From there he became a political science major at UC San Diego.

“I didn’t want to go to law school and a lot of my friends were becoming police officers,” Langone said. “They were like, ‘Why don’t you apply, why don’t you apply?’ I actually applied to some police departments just to get some more experience with oral board interviews and actually got hired.”

After getting accepted and becoming an officer, Langone found that he really enjoyed the profession. Nine years later, he still protects and serves and believes there is nothing he would rather do.

Langone wants to let any students interested in law enforcement that they can simply talk to him.

“Talk to me,” Langone said. “You know, I am around. Or even come to the police department. Law enforcement [is] a very interesting profession. You do a lot of different things every day.”