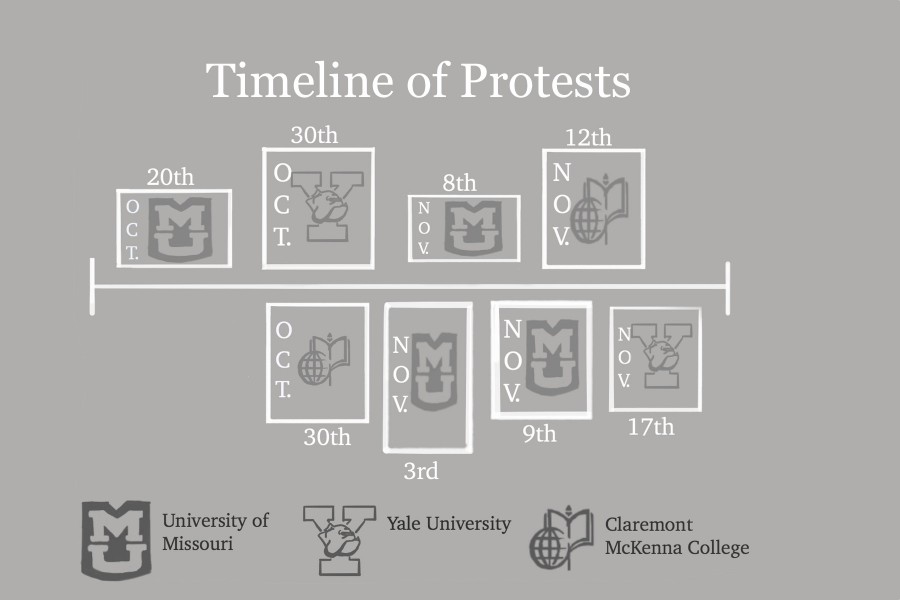 Recently, accusations of racism within America’s universities have caught national headlines. In the past couple of months, specific institutions such as Yale, Claremont McKenna and the University of Missouri, have come under scrutiny from administrations and students alike for their conduct toward minority groups and racial insensitivity.

Although racial equality, or the lack thereof, has been a consistent topic of discussion at the university level for decades, the events that ensued around this year’s Halloween season have raised awareness regarding the issue.

In October, Claremont McKenna College (CMC) quickly landed itself in hot water. Initially, the conflict originated from a group of students’ Halloween costumes that were described as perpetuating stereotypes toward Mexican culture. In a response that sparked even more controversy, Dean Mary Spellman was accused of implying that minority students did not fit the “CMC mold,” which prompted a slew of protests eventually resulting in her resignation.

Claremont McKenna is not alone. Ivy League institution Yale University also came under fire in late October when it was revealed that some students had been turned away from a fraternity party that was labeled as “white girls only.”

Although some fraternity members deny such allegations, Yale, under pressure by student activists, decided to address concerns about the conditions of alienated student groups at the campus. Actions include increasing budgets for cultural centers, educating faculty members and holding conferences on racial, gender and social inequalities.

Unlike the situations unfolding at Claremont McKenna and Yale, the University of Missouri’s recent racial issues were the result of a long-term build in tensions, and no particular incident is responsible for sparking the issue. Protests in November at Missouri originally spawned in solidarity with the news of Claremont’s Halloween and Dean incidents and unrest, as well as dissatisfaction with the school’s former president, Tim Wolfe, had been escalating for several years.

Tensions continued to escalate in late October when a swastika painted with feces was found on a residence wall and Wolfe refused to meet the demands for equality of Concerned Student 1950, the student group that spearheaded the effort to combat racial discrimination.

In addition to Concerned Student 1950s efforts, black members of the football program boycotted the team, demanding the removal of Wolfe. Finally, protests, student government pressure and even a hunger strike by one individual proved to be too much pressure for Wolfe, who announced his resignation on November 9.

Social media platforms have made it easier for students to stand in solidarity across America, garnering more and more attention with each protest. Reactions by mainstream media outlets ranged from the traditionally conservative, such as the idea that the events accused of racial discrimination are expressions of free speech to more liberal approaches, like the concept that the incidents are completely insensitive and intolerable.

Although the incidents at these three schools have captured headlines in the past several months, accusations, protests and administrative actions regarding racial inequality and discrimination have and continue to saturate a wide range of universities across the nation.