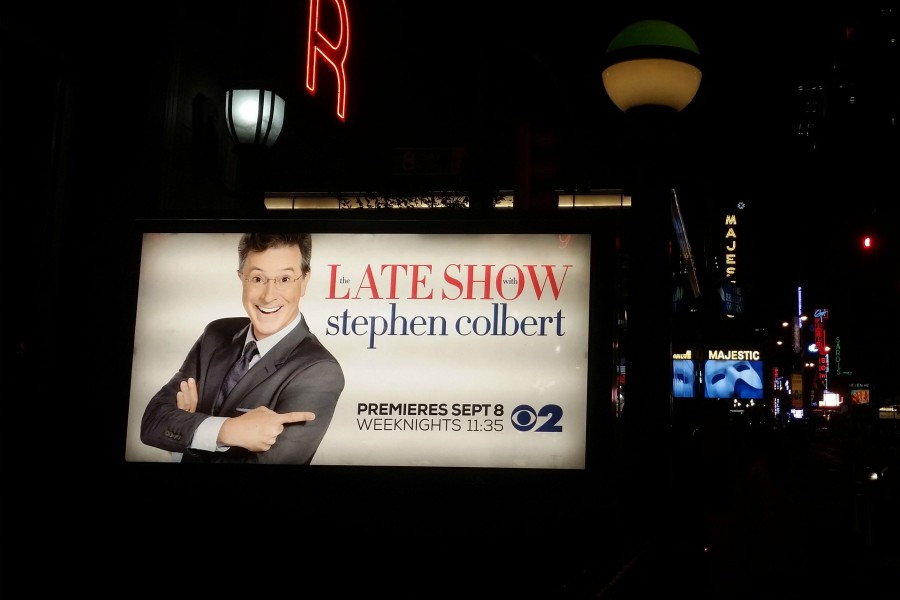 On CBS’s new edition of the “Late Show,” Stephen Colbert has not one, but two legacies to live up to. The long-running and critically celebrated tenure of David Letterman, former host of the Late Show, differed greatly in style from the satire of Colbert’s own Colbert Report, which aired its last episode nine months ago on Comedy Central. In an effort to unite the audiences of both shows, Colbert spent much of his preparation for the show developing a style that takes influence from both programs — and on Tuesday, September 8, he premiered the show and confirmed hopes that the style would give him greater freedom to pursue new comedic horizons. Colbert has created a role for himself with the charisma and approachability of Letterman while retaining the cutting humor, quick thinking and oblivious tack that made him so entertaining on the Colbert Report.

The most striking aspect of the pilot was Colbert’s comfort with the stage. Unlike many talk show hosts, he approaches Letterman’s legacy with an enormous reputation of his own and his confidence in his ability to create a rapport with the audience showed through. For the Late Show, Colbert is working with many of the same team members who wrote and produced the Colbert Report, including former Daily Show host and mentor Jon Stewart as well as executive producers Tom Purcell and Meredith Bennett, and the result is that he never appears to speak from the script, fitting his role so easily that it seems that his words are coming straight from his thoughts.

Colbert and his team make sure that talk show traditions are riddled with the sarcasm that best fits his style. He satirized the concept of sponsor announcements with a segment in which he revealed that an amulet from an Assyrian fire god had granted him his role as host of the “Late Show,” with one catch: Colbert must advertise the products of the show’s sponsors. However, he took notes from Letterman here, with an air of geniality rather than the biting humor that punctuated his jokes on the Colbert Report.

Later in the show, he addressed a recent Donald Trump rally in which the presidential candidate swore off Oreos after manufacturer Nabisco closed a plant in Chicago and opened a new one in Mexico. Colbert proceeded to play more news clips of Trump, treating himself to an Oreo with each one, eventually stuffing an entire bag of the cookies into his mouth in tribute to the antics of Letterman’s show. The segment, while light-hearted, repurposed the similar, albeit darker, “I Need a Drink” segment on the Colbert Report. That set-piece had Colbert guzzling liquor in response to the various depressing world events that had happened in the past week, and its inclusion in the Late Show pilot calls attention to his dual talents — both as a cultural figure who draws viewers’ attention to issues around the world, and an entertainer who allows them to distract themselves from it.

Colbert’s interview of presidential candidate Jeb Bush showed minor signs of a weakness that plagued his interview segments on the Colbert Report. On the Colbert Report, he often made so many jokes and focused the spotlight so strongly on himself that his interviews virtually ignored his guest and came to feel like they were just a distraction from his main, news-anchor style segments. Colbert took a step towards a true interview process in his interview with Bush, choosing to opt for questions that encouraged legitimate discussion. However, his tendency to interrupt Bush with his own thoughts and one-liners prevented them from having a thoughtful conversation.

Colbert went to the length of calling out his own brother in the audience and acknowledging his and his brother’s political difference. All for the purpose of asking Bush, “Without in any way diminishing your love for your brother, in what ways do you politically differ from your brother George?” It was a question that warranted an honest answer, but it felt like it simply took up airtime that could have been spent on a deeper response. The rest of the interview followed a similar formula, with questions that felt like punchlines never intended to be sullied with the responses of Bush himself. Colbert seemed inclined to create an informative interview; if he had given Bush time to respond in a meaningful way, his questions could have led to thoughtful answers that caused audiences to reflect on Bush’s presidential candidacy in a new light. But Colbert seemed content simply to entertain audiences like the rest of the media — an approach that feels like a waste of his talents.

Like many talk show pilots, the premiere of the Late Show gave little indication of where the team will choose to focus their attention. Much of the airtime was spent on introducing his set, his band, and his staff, as well as on stunts like the sponsorship announcement, all of which will be replaced with more specific content such as interviews and monologues. Future episodes will put Colbert, and his jokes, in the spotlight — and determine whether the show has lasting potential.