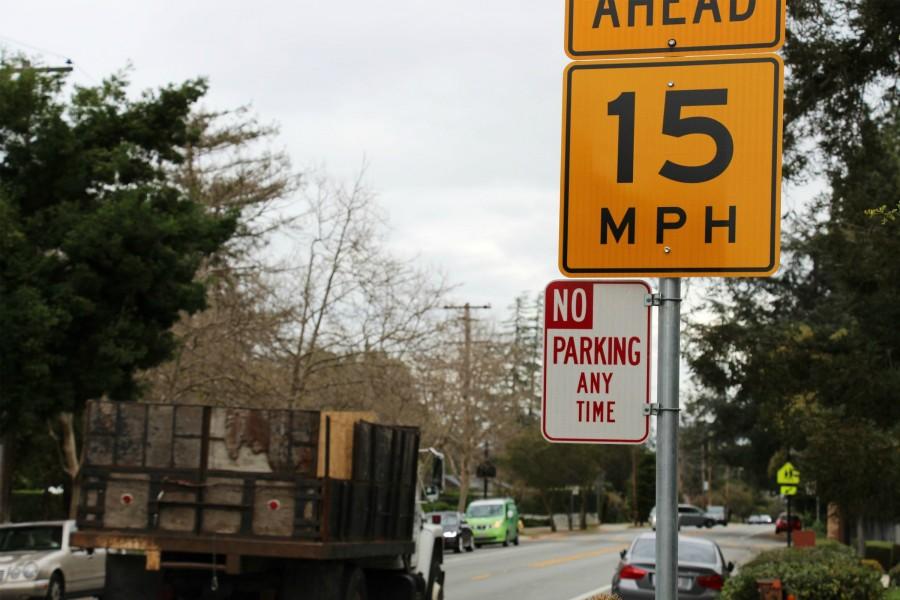 The signs will be enforceable during school hours; however, they will not be strictly enforced until one month after each installation, which should be completed by the end of March. For now, drivers exceeding the new limit will simply be issued a warning until people are aware of the new changes.

At private schools, the signs have yet to be put in place. By applying the new speed limits to public schools first, the city can determine if the limits are successful in achieving its goal before approaching private schools to suggest the change.

When cities such as San Jose and San Francisco began updating speed zones in order to increase safety for cyclists and pedestrians in 2015, the Los Altos Public Works Department (PWD) decided to see how the changes would be received there. The planning for the Los Altos project began in 2014, when former Mayor Val Carpenter asked the PWD to determine the feasibility of applying 15 mph speed zones in front of schools.

“This safety endeavor is part of the City Council-approved Pedestrian Master Plan, which aims to improve pedestrian safety and mobility throughout the City,” Los Altos police said in a notice concerning the speed limit on the Los Altos city website.

The Plan is intended to cover areas the city is not currently addressing.

“[The plan] is more for how people get through our network to get to where they want to go,” Los Altos Engineering Division Director Jim Gustafson said. “What we’re trying to find out is, where are the gaps in our existing grid?”

As the first active project of the PMP, the updated speed limits will hopefully accomplish several different goals. Most importantly, lower limits should encourage children and parents to walk or bike to school, which will decrease car traffic.

“[At] 15 or 20 miles per hour, if [kids] get hit, the chances of them surviving and having fewer injuries are [higher] than if someone is going 35 or 40,” PWD Transportation Projects Manager Cedric Novenario said.

The lowered speed limits are only the beginning of the updates that the PWD has in mind. One idea involves implementing new walkways and wider sidewalks for the mass of cyclists and pedestrians commuting to school. In order to fund these changes, the PWD plans to apply for grants, one of which is the Active Transportation Grant, an overarching California grant that includes multiple cyclist and pedestrian safety grants.

“[This is] one measure to try and make it, at least for the school hours, safe to get to school,” Novenario said. “There will be other things we try to do [to make it safe], like putting new walkways or bike paths to get to school, but this [speed limit change] is one way we can do this already.”

So far, responses have been mostly positive, with the few complaints dealing with lengthened commutes due to the lower speed limits.

“Parents think [the plan] is great because obviously it’s a lot safer for the kids to walk [or bike], so it feels good that parents welcome the change,” Novenario said. “When people call who are concerned or don’t like the signs, I have to try and educate them why we need to do this.”

Students, however, do not seem as supportive of the lowered limits. Many agree that 25 mph is slow enough. However, this belief may derive from the misconception that the 15 mph limit will apply around the clock, instead of just during school hours.

“A 25 to 20 mph limit on school hours is good enough,” junior Ansel Ordonez said. “When seeing a pedestrian sign, it’s your responsibility [as a driver] to be alert and keep caution, in which case you should avoid speeds above 25 mph, because people will jaywalk unless there’s a crosswalk.”