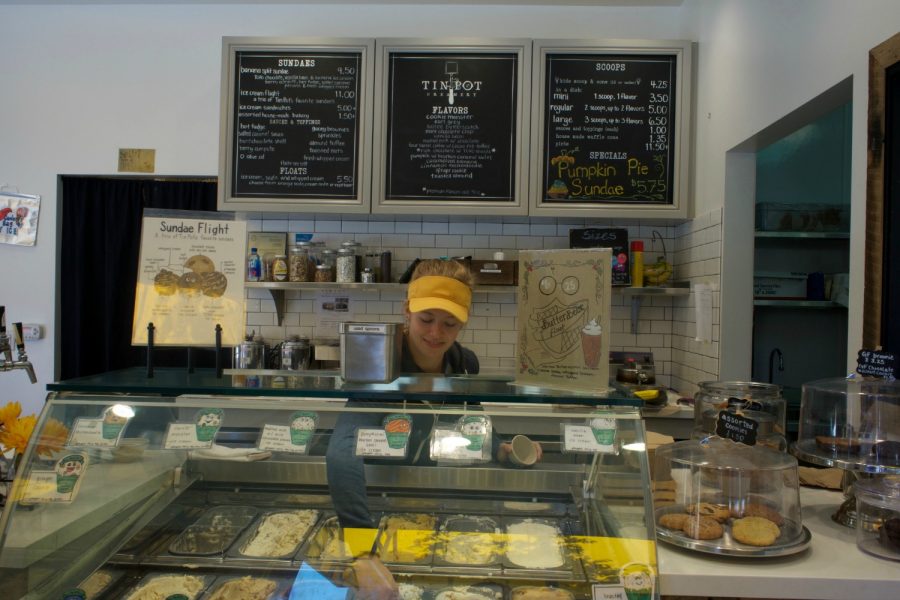 Senior Mikayla Marrin works at Tin Pot Creamery in Los Altos downtown for 15 to 20 hours a week. The new minimum wage increase will increase wages from $11.00 to $12.00 per hour in January 1, 2017, and will continue to rise in following years. Photo by Yolanda Spura.

By Cameron Avery and Ross Avery

Starting next year, minimum wage workers in Los Altos will have a little more to bring home each day.

On September 27, the Los Altos City Council voted 4-1 to pass an ordinance that will result in a substantial, city-wide increase on the minimum wage from the current $11.00 per hour.

Starting on January 1, 2017, the minimum wage will increase to $12.00 per hour. That amount will be raised incrementally for the next several years, reaching $13.50 by 2018 and $15.00 by 2019. Come 2020, the minimum wage will see a yearly increase based on the Bay Area Consumer Price Index (CPI) not exceeding a 5 percent raise each year. The CPI is a statistic that is generated based on the changing prices of goods and services and reflects inflation.

“We discussed [the minimum wage] at the regional level and came to the conclusion that it made sense for all of the cities here to try to have the same minimum wage so that we would all be working a level playing field,” City Council member Jeannie Bruins said at a public forum for prospective council members seeking election. “I’m proud that the City Council did make the decision [to implement the minimum wage increase].”

The ordinance discussed by the Cities Association, comprised of the 15 cities in the county, will raise the minimum wage at a faster rate than the April bill signed by Governor Jerry Brown that mandated a $15.00 per hour rate by 2022 for California.

Due to the higher cost of living in the county, the Cities Association felt the need to accelerate the state’s timeline to better match the area’s economic demands.

“The county decided that we needed to do something a little more aggressive than the state,” Bruins said at the same forum. “Sacramento has to look across the entire state where there’s different socioeconomic diversity. What’s exacerbated in this county is that it is so expensive to live here.”

“It’s definitely going to have an impact on these small businesses,” Rose said. “The only way they can compensate for the added expense is to up their prices.”

Owner of Adventure Toys and Teacher Supplies Leslie Chiaverini remains skeptical of accelerating the schedule of the wage changes, which she believes will exacerbate difficulties small business already face. In an open letter to the Los Altos City Council, she maintained that she was not in support of the deviation from California’s mandated minimum wage timeline.

“With sales declining and other costs increasing, I see small businesses experiencing challenges that put us on the ‘endangered species list,’” Chiaverini said in the letter.

Another point of contention between City Council and local business interests revolves around the “learner’s wage,” in which minors can be paid 85 percent of the minimum wage in the first 80 hours of  their employment. While the state plan includes the learner’s wage, Los Altos’ ordinance left it out.

“We and Santa Clara County decided that a workforce is a workforce, and if somebody’s hiring you as a student, yes, they’re taking a risk,” Bruins said. “But they also can terminate you and say ‘Thank you for your service, but this really isn’t working out.’”

The Chamber of Commerce, however, favored keeping the learner’s wage.

“What we thought was important was that it included the same exemptions the state has, and the state has in their law that there’s a learner’s wage,” Rose said. “We heard from a lot of businesses that they thought the learner’s wage should be imposed, and our council did not do that.”

“I think [the higher minimum wage] is good,” Tin Pot Creamery worker and senior Mikayla Marrin said. “It definitely adds up for me, because I’m working long hours, so the extra dollar or two helps.”

Senior Koa So’Oto works at Baskin-Robbins and currently makes $10.50 an hour as per learner’s wage. He notes that the increase will help those in lower socioeconomic brackets stay afloat.

“I feel like it’s very useful because some kids nowadays don’t have the resources that some other kids have,” Koa said. “They have to pay or help pay bills for their family, and they have to help pay for food.”