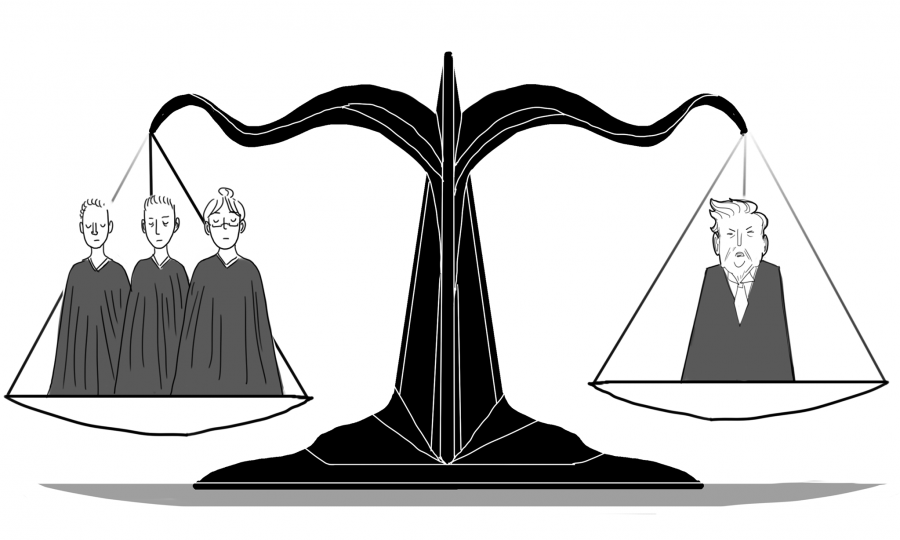 On January 27, President Trump signed the first executive order of two that barred citizens from Muslim-majority countries from entering the United States. The reason for this bizarre use of presidential power? “To protect the American people from terrorist attacks by foreign nationals admitted to the United States.”

Of course, a new president should work on the issue of counter-terrorism, but the first executive order was completely illogical. It barred citizens of Iraq, Syria, Sudan, Iran, Somalia, Libya and Yemen, but did not include the countries from which Islamic radicals have killed Americans since the September 11 attacks. Not only was the literal intention behind the order irrational — restraining a religious group from entering the country is blatantly discriminatory — but the logic that it follows makes no sense either.

And beyond the carefully researched and crafted reasons above, the first order just frustrated me. It makes me mad that our country has gone from radical xenophobes committing hate crimes against Muslims to the federal government acting against Muslims. It feels as though the anti-Muslim crimes that have occurred in the past and that were formerly condemned by our government are now given a not-so-subtle nod from the Trump administration. And yes, the Trump administration can defend its actions by claiming that the ban doesn’t specifically target Muslims, but of course this order discriminates against Muslims. I don’t need a law degree to see that.

Despite the fact that Muslims in those seven countries are targeted by terrorists groups at much higher rates than their Christian counterparts, Trump gave priority to Christian minorities who are being persecuted. Blocking Syrian refugees entry not only clashes with the humanitarian values of this country, but more than that, it’s insulting that Trump gave preference to Christian minorities that aren’t targeted at the same level that Muslims from these countries are. Speaking about Middle Eastern Christians seeking refuge in the United States, Trump has said, “They’ve been horribly treated… they [terrorist organizations] were chopping off the heads of everybody, but more so the Christians. And I thought it was very, very unfair.” Of course it’s unfair! This whole situation is unfair! We could delve into a separate argument about the rise of international terrorist organizations and unstable governments and how screwed up our world seems to be, but the point is, the situation in that region of the world is unfair for everybody, regardless of religion. If the President of the United States is giving preference to one religion over others, that only increases the injustice that’s already present. Trump’s second executive order, issued this Monday, March 6, does not include the section that initially gave preference to Christians, but the fact still remains that the first order was crafted with the intention of helping Christians over Muslims.

Despite Trump’s nonsensical actions, there is hope that perhaps our country isn’t having a complete lapse of judgment. Shortly after Trump signed the executive order, Judge Ann Donnelly from the Federal District Court in Brooklyn ruled that people detained in airports due to the executive order could not be sent back to the country they came from. A week after the ban was implemented, Federal Judge James Robart issued a restraining order on Trump’s executive order. This acted as a “freeze” on the ban and let travel occur as it normally does. In response to Robart’s restraining order, the Department of Justice filed an appeal, which was unanimously struck down by the Ninth Circuit Court of Appeals. After a devastating two weeks, the Ninth Circuit Court ruling helped me regain confidence in this country’s legal system. It’s horrible that presidential power was used in such a cruel, heartless way, and it’s beyond maddening that hundreds of completely innocent people were detained and treated as criminals at U.S. airports. But I am so, so thankful that our legal system did its job and fought for the right thing. Our government was set up this way for a reason. There are checks and balances within the three branches of government for a reason, and I never fully understood that until now. Maybe the Framers of the Constitution didn’t foresee a Donald Trump, but perhaps they understood better than I expected the potentially disastrous situations that can arise from presidential power.

This executive order and its subsequent repeal have given me renewed hope in this country and renewed confidence in our legal system. Because though the man in the Oval Office is quite literally bordering on evil and has lots of completely crazy ideas, I do find a small piece of comfort in the fact that the American government was set up in a way to protect against exactly this situation. The system of checks and balances worked in the case of this first immigration executive order, and I pray that they will continue to do so for the second order and for the next four years.