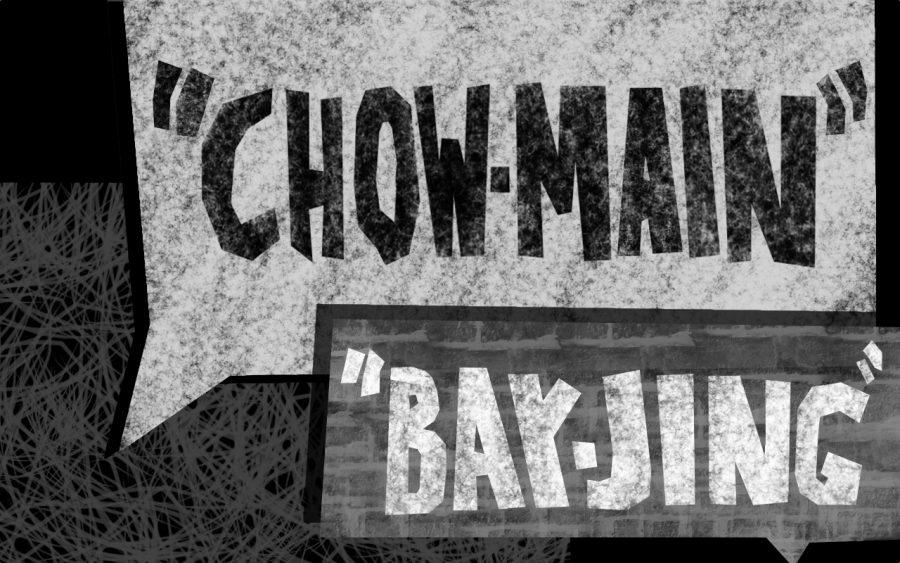 I’d rate myself a solid 84 percent in Mandarin fluency, but when I refer to Beijing and chow mein as embedded within an English sentence, I pronounce them as the Anglicized “bay-jing” and “chow-main” rather than their linguistically accurate Chinese pronunciations. Chow mein isn’t even spelled correctly phonetically — it should, in Mandarin, be “chao mian” — but I consistently spell it c-h-o-w-m-e-i-n in a voluntary ignorance.

I prefer chopsticks over forks, but I eat with a fork when I go to Panda Express. I speak Chinese at home, but say things like “Dope” and “Yikes!” excessively in public so as to assert my faux whiteness.

Despite what it may seem, I don’t really see these little mannerisms as a tragic loss of culture, per se. I honestly feel like if I hadn’t assimilated into American culture to some extent, I wouldn’t be fulfilling the very reason my parents immigrated to America in the first place. I don’t feel like I’m letting them down by wholeheartedly preferring spaghetti carbonara over chow mein. Still, there’s an unshakable, subtle internal conflict about what percent of me is Asian and what percent is American.

I’ve grown up with the unwritten assumption that by preferring spaghetti carbonara over chow mein, I’m somehow betraying my Chinese roots, but to prefer chow mein over spaghetti carbonara would mean refusal to assimilate into American culture. It’s a constant struggle between denial and perpetuation of a Chinese stereotype I was born into.

I’ve lived amidst a weird, unspoken phenomenon where Asian-Americans judge other Asian-Americans for leaning more towards one side of the hyphen or the other — we’re either too Asian or too American, too much Oolong tea and anime or too much Brandy Melville and Starbucks. It’s an altogether ridiculous phenomenon, though I am not at all immune to it and fully a judgemental jerk in this regard, but it seems to me like a somewhat justifiable symptom of lacking cultural identity. Because we ourselves feel an obligation to err towards one side or the other, Asian or white, we put others down for being on the “wrong side” because it makes us feel that in the abstract, blurry range of ethnicities that is “Asian-American,” we are doing “better,” as if there even is an objective “better,” than someone else is.

The reality I experience, in criticizing other Asian-Americans for being either too Asian or too American, is like being a blueberry in that pancake, and criticizing another blueberry for being too far to the left. Turn the plate, and which direction is left anymore? More importantly, who gives a damn? We’re all part of the same Asian-American pancake. Pancake metaphors are dumb regardless of where you, a metaphorical blueberry, might stand.

Not that I have anywhere near the credentials to do so, but I’d like to take the already esoteric paper on panethnicity one step further: I hypothesize that panethnic identity can be a voluntary choice. There are obviously subconscious psychological factors at play — solidarity as promoting empowerment in the face of discrimination or an acceptance of a societally perpetuated stereotype — but I feel that if I could teach myself to see being Asian-American as its own ethnic identity and not the deformed extra limb of Asian culture, the spectrum of Asian to American would be nowhere near as instinctive.

I don’t honestly believe that by writing this piece I’ll undergo some sort of revelation and burst from a silk cocoon in a shower of confetti, screaming, “I won’t judge you if you shop at Ranch 99!” The stereotypes we hold for people even within our own minority group are far too deeply rooted to so easily disregard, but I think that by beginning to consciously recognize Asian-American not as a loss but as a confluence of cultures, we can maybe begin to placate some of the fears and overall confusion over cultural identity we’ve subconsciously held as first generation Asian-Americans.

Here’s to boba, here’s to spaghetti, here’s to Ranch 99. I raise a toast to all the things that make us Asian, American and Asian-American. Cheers.