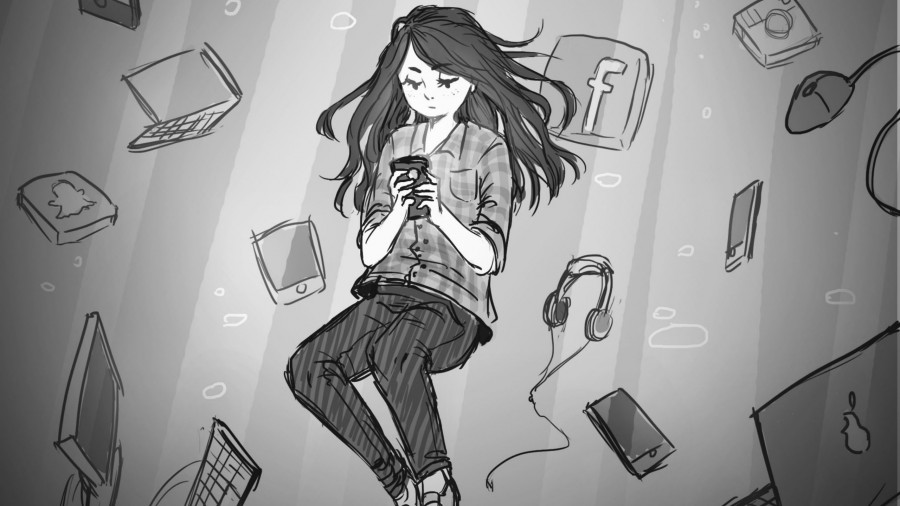 In her 1968 essay, Joan Didion likened the acidheads of San Francisco’s Haight Street to a Yeats line: “slouching towards Bethlehem.” “The center was not holding,” she takes from Yeats as well. “Turning and turning in the widening gyre/The falcon cannot hear the falconer,” the poem continues. Confronted with economic turbulence, spiked crime rates and ostensible cities of missing children, Didion and her contemporaries could not help but foresee a massive social hemorrhage. Participants in that countercultural movement conceived and wanted a united society, an arterial system of feeling and communication: a social network. Their intentions were not so dissimilar from ours. We found out that you could do it with a little piece of silicon.

What does digital nativity constitute? What is a digital native? In a world inundated by terminology, it’s important to define ourselves. One is reminded of the bird or fish that cannot identify air or water. It’s difficult to pinpoint something which is fluid and which we are always surrounded by. So, in what exactly are we swimming?
“[A digital native] is a subset of the Millennial generation who have grown up immersed in a networked world, with access to ubiquitous digital technologies and the ability to learn and use them in fluent and sophisticated ways,” researchers Shahper Vodanovich, David Sundaram and Michael Myers said in their 2010 Research Commentary: “Digital Natives and Ubiquitous Information Systems.”

We are native to a ubiquitous informations system (UIS). UIS, broadly, is a conduit of content, communication and information through which we manage our personal and professional lives. The introduction and adoption of mobile devices, personal laptops and other smart technologies have come to govern the way we do business, make friends and are entertained: the way we function.
What is the effect of technological ubiquity on digital natives?

Clinicians theorize that near- constant exposure to images and access to synchronous communication may mold digital natives as impulsive and requiring instant gratification. The fluidity by which digital natives share and disclose information may make them less wary of online hazards. This piece will not deliver the same inane soliloquy, which is dispensed by technophobes across the nation. The soliloquy of “I have seen the coming of the apocalypse and it hath wings made of keyboards. It eats children and speaks in emojis,” that rant which ends with the anecdote where the speaker sees someone collide with a telephone pole while transfixed by their cell phone.

It’s true that the inception of ubiquitous technology poses problems. I would posit that any new governing force in society will have side effects. But, the need to be gratified instantly is not a drawback. It’s an adaption to an environment which has the capability to gratify us instantly.

I have probably stood for too long in the camp of curmudgeonism. Now, when I see a student unwilling to be without their smartphone, I don’t see something necessarily selfish. I see a deeply-ingrained instinct to be connected, to collaborate and to have fun. If I may be obnoxious: Attention! Students creating art depicting families at dinner tables, separated by their cell phones: don’t, we’ve already seen it. Teachers inclined to launch into a speech directed at young people, in legion, in which use of technology is described as an addiction: don’t, it is not. It is how we hear the falconer.