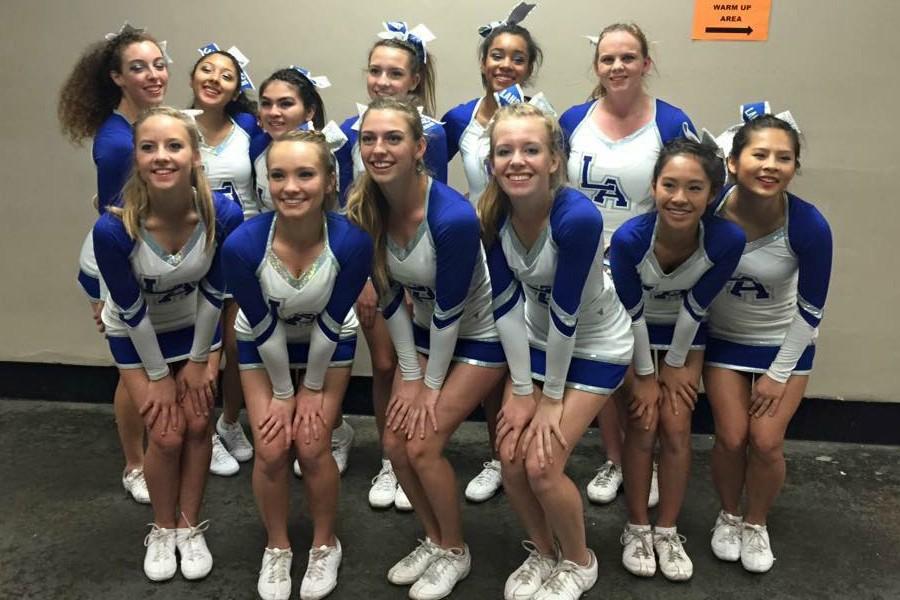 The cheer team poses after a competition at Jamz Slam City. The girls’ score was high enough qualify them for Nationals next February. Photo by Skyler Maeso.

The cheerleading team has qualified for the Jamz Nationals tournament and will travel to Las Vegas to compete in the tournament on February 9, 2016. The team scored an impressive 83.47 at Jamz’s Slam City on December 5 to secure its place at Nationals, and it hopes to improve upon that success come February.

“I’m incredibly proud of the performance,” senior captain Kelly Little said. “We learned our competition routine in a matter of weeks, while most competitive teams have been practicing their routines since the summer. We hit our entire routine… so overall I’m more than satisfied with our performance. But more importantly, I’m proud of our ability to pull together and confidently perform our routine with a limited amount of practice.”

Despite the team’s success on the mat, the judging process did not go as well as they had expected.

“We performed a stunt called a ball-up lib, which is [a violation] in our division because of the released foot [of the flyer],” Kelly said.

The rules that prohibit specific moves and techniques are unique to each event organizer and division; a stunt like the ball-up lib may have gone over perfectly at another tournament, so it caught the team by surprise. But they still have an equal chance of competing and winning at Nationals.

“We will definitely be removing the [violating] pyramid section, cleaning up our routine and formations, and possibly adding in difficulty (such as more tumbling, more flexibility positions in stunts, and more advanced dismounts from stunts) in order to score even higher at Nationals,” Kelly said.