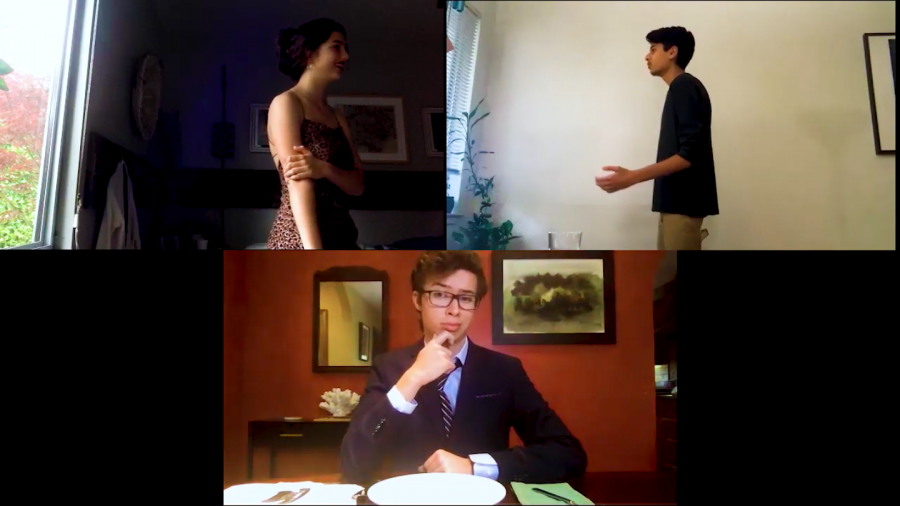 Whether it be  prop issues, costume mishaps or a global pandemic, in the world of theater,  the show must go on. Due to the COVID-19 outbreak, Broken Box was uncertain of how their last show of the year would proceed, or if it would at all. Still, they were able to transfer Check Please!, a comedy about blind-dates gone wrong, online.
We interviewed several Broken Box members to get their take on the production of Check Please!.

Sophomore Serena Gaylord played “Girl”, the female lead in the show:
How did you approach the transition to a virtual production?

Initially, we were all confused on what we were going to do, because we thought we were going to come back to school. So it was a very collaborative process to come up with the idea to do it over Zoom. We had a lot of meetings, but then eventually we settled on recording it.

It was interesting because I’ve never done anything like that. I’m just a regular stage-based theater kid. Usually, we see the other person, so it was a lot easier. It wasn’t like just acting to a blank screen. We really had to lean into our facial expressions and our hands in our head. And as far as the physical connection that we had, we had to spend some extra time choreographing.

There were a lot of technical challenges. I kept having to re-record a lot of scenes and because I was doing it on my phone and my connection was unstable, or I glitched. One time my sister walked into the middle of the scene.

Sophomore Arya Nasikkar played “Guy”, the male lead in the show:
What were your initial thoughts when you heard that the play was going to be cancelled?

I was kind of bummed out because it was my first year in Broken Box. We’d done two shows on stage, and I was kind of getting used to them. But then the show got cancelled and we had to do it online. So I had to adapt to another situation, which was kind of difficult. But it was fun to learn how to act online via zoom

Usually, when I’m on stage, I have the person in front of me to actually talk to, and it’s easier to memorize lines. But via zoom you have to memorize it in order, which is kind of tough. But once you get the hang of it, it gets easier.

I was the main character. I was Guy; I didn’t really have a name. It was just guy and girl. I went on all these different blind dates that went wrong, except for the time I bumped into the other main character.

Junior Ella Freda-Eskenazi edited the production:
What were some challenges you faced, and how did you overcome them?

One or two scenes had parts without audio at all. It was a lot to ask to have both actors re-perform, especially considering that a few of them were seniors with a lot going on in their lives. One of the actors had to lip synch to their own words and I overlaid the audio.

I’ve always really been interested in things like videography and photography. Before this production, I’d never used Adobe Premiere Pro. But it was definitely a steep learning curve.

Senior Adam Hollingworth played Louis and Dan:
What values are you going to take away from Broken Box as you go into college?

I’d love to keep acting in college, but just as a small little thing. I think Broken Box has not only helped me to act better, but also taught me what a cool and amazing experience acting can be. It taught me the importance of role models and good leadership.

Make every role the greatest it can be, and don’t be disappointed if you don’t get the lead role.

Broken Box director Nancy Moran:
What were some of the hardest parts of moving the show online?

I think the biggest thing we had to work on was the approach to acting. It’s just so different when you can’t rely on movement and bigger set pieces and the energy that comes from that physical contact. We couldn’t have had a better show because of the way it’s set up with just blind date and blind date. We focused on using the voice to tell more of the story and create more of the character that is going to connect with your audience.

The biggest benefit was showing them that theater can thrive in any situation. We talked a lot about how, historically, theater has been done in a weird place. It’s done outdoors, out on a street, in a forest–you can find places to create the art and still make it come to life.