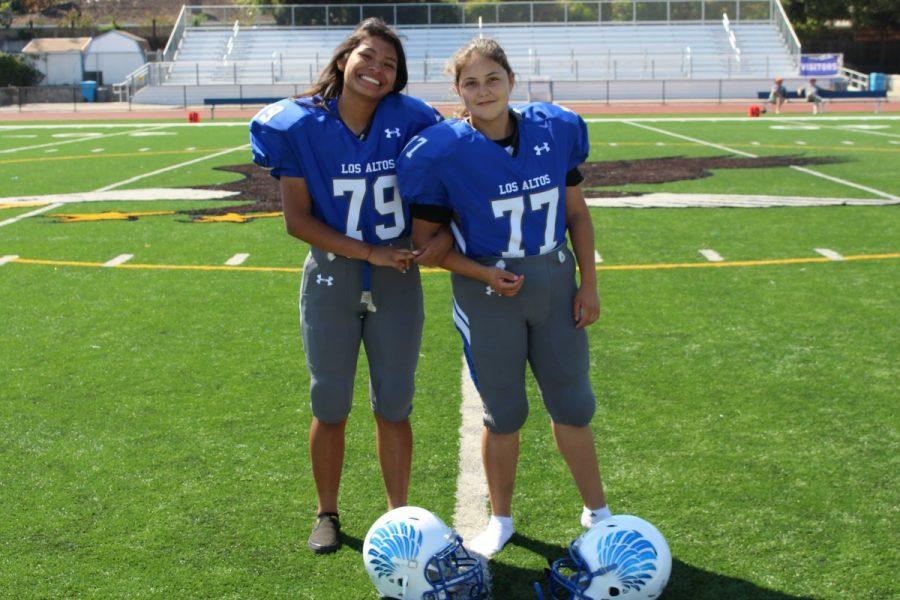 By Alex Luna and Emily Meza-Perez

We don’t say “boys” football, but that’s still what everyone thinks. In a high-stakes Friday-night game against the rival Spartans, the Cheer Team, Blue Crew and the mass of blue-colored fans all cheer for our “boys” to bring home the gold. But as of this year, two new teammates fought their way onto the roster and changed the makeup of the team: juniors Carmen Garcia and Esmeralda Nuñez.

As the first varsity female football players in school history, Carmen and Esmeralda are working hard to change the notion of the typical football player with the support of their teammates.

“I think it’s cool how they took it [into] their own matters, to be like ‘Hey its 2016, you can’t be sexist anymore, girls can do anything boys can do,’” co-captain and junior Vincent Colodny said. “They’ve tried their best and they’re doing really well. They’re very much a part of the football team.”

After participating in last year’s annual Powder Puff tournament, Esmeralda was motivated to play the sport and recruited other girls to tryout for the school team.

“I talked to some girls [who participated in powder puff] and asked ‘why aren’t you on the team?’” Esmeralda said. “I thought maybe if I did it, I would encourage more people to do it.”

She then persuaded Carmen, who participated in flag football during middle school, to join the team. The two girls attended pre-season conditioning during their sophomore year to prepare for the season. Initially, they faced difficulties in participating in a male-dominant sport.

“We were the only girls,” Carmen said. “[Our teammates] would look at us and not say anything. It was embarrassing because they were really strong and I was struggling with five pounds [on the bench press in the weight room].”

When Carmen and Esmeralda first showed up to practice, most of the players assumed the two girls would eventually quit. Every year, a good portion of the newcomers fail to fulfill the sport’s physical demand, and the all-male, hard hitting environment of the varsity team seemed especially hostile to two girl players.

“Last year we had a couple girls try out and they showed up once before spring practice,” Vincent said. “They never came back. I’ve seen it happen so I kind of expected it to happen but I was shocked it didn’t.”

The majority of sports teams have an established sense of community, but the team was divided over initial doubt of the girls’ abilities. The two girls realized they needed to prove themselves to the team before they could earn any respect or even be considered a teammate.

“I feel like they definitely underestimated us, and they thought we were going to quit,” Carmen said.  “A lot of the guys thought ‘Oh they won’t be here,’ but they saw that we kept going even if we struggled so much.”

Head coach Trevor Pruitt had a similar outlook as their teammates when they first began attending practices. Coach Pruitt had the same initial expectation of Carmen and Esmeralda that he did of most newcomers.

However Carmen and Esmeralda’s perseverance proved they wanted spots on the team, and Coach Pruitt recognized that when making the roster this fall.

“I knew they were super dedicated once they were here, every weight-lifting session, the off-season, all summer.” Pruitt said. “So first impression was a little shocked. But you know they’ve been here everyday and they’ve been dedicated, so we love having them.”

For the girls, they knew they were regarded as actual team members when Coach Pruitt started treating them normally, like their male teammates.

The other teammates also grew warmer towards Carmen and Esmeralda after the two continued to  attend the rigorous pre-season conditioning as well as the fall training. Since everyone is a student-athlete, it was easier for the team to realize gender isn’t necessarily a factor in success, especially when everyone has a common goal.

Carmen and Esmeralda, having trained alongside them for the better part of the year, now have great relationships with the coaches and players.

“[One] day I was pushing the sled, I had 15 yards left but my legs burned so bad. I couldn’t physically do it,” Esmeralda said. “My legs would just give up and I would fall every two yards, but hearing [my teammates] clap and being like ‘You can do it,’ I just had to get there… It’s that motivation, that I thought ‘This is what I came for,’ ‘This is why I am here.’”

But even as hardworking official members of the the team, Carmen and Esmeralda have yet to make an appearance in a league game. According to them, they have only played the role of substitutes. Most of their game participation boils down to supporting their team from the sidelines, as of now.

“I’m just standing there,” Carmen said. “That’s when I’m questioning, is it worth it? But we’ve been here since February, why quit now?”

“We’ve been here for seven months and there are some guys who came the two last days of tryouts and they’re in and they are playing right now,” Esmeralda said.

According to Coach Pruitt, the reason Carmen and Esmeralda have not played yet is because they have not participated in the “team portion” during practice, a drill designed to prepare players for the reality of game time.

“They need to rotate into the team portion of practice,” Pruitt said. “They do all the individual portions of practice but when we do [the team portion], they don’t rotate in. If someone is not rotating in whether it’s them or any other player on the team, we can’t put [them] in a game. Also our games have been so close, there’s a lot of guys on the team that also haven’t played because our games have been so close.”

Despite this, Carmen and Esmeralda are determined to get some playing time this season. They both feel that playing is an essential part of being on the team.

In spite of this, neither of the girls are discouraged from participating and both continue to give it their all. Carmen and Esmeralda have high hopes for game time in the near future, and that all their struggles and determination will pay off. Coach Pruitt has the same intention.

“My goal is to get them in this year, and I think they want to play.” Pruitt said. “And I think the best part is that they don’t ask for special treatment, they don’t want the special attention, they just want to be a part of the team.”

Even having faced numerous obstacles to officially be a part of the team and still not having played in a game, Carmen and Esmeralda will continue to keep working hard while hoping to inspire other girls to try out for the team, even if it seems impossible.

Nobody thought it was going to be easy, but Carmen and Esmeralda have done what no one else has ever managed to do in the history of Los Altos football. As they continue to work towards getting a spot on the field, they stand as role models for other girls considering football.