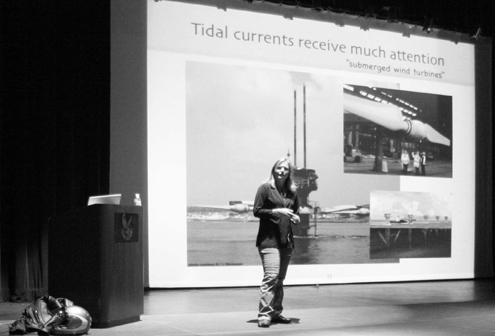 Margot Gerritsen, Associate Professor of Energy Resources Engineering at Stanford University, lectures to students about ocean energy during Science and Technology Week on Monday, November 2. Many positive changes have been made to Science and Tech Week this year.

Bill Gates, while growing up in Seattle, was presented with the opportunity of a lifetime when a computer terminal was purchased for his private school (a breakthrough idea even for a college at that time). This single exposure to technology put the future billionaire down a path that would eventually lead to his fame, success and wealth.

Science and Tech Week, held from Monday, November 2 to Friday, November 6, gave students multiple exposures to science and technology with the hope to spark the same inspiration in tomorrow’s scientists and researchers.

The planning committee, which invited speakers from the technological treasure trove that is Silicon Valley, did a commendable job of making the event accessible and interesting for the community.

The week was much more engaging this year because students were less stressed after Homecoming and minimum days, and as a result they were in a better mood to appreciate something new. Before, the event was held during the spring and near SATs, AP testing and Writers’ Week.

“It’s not late enough in the year that my mind is totally occupied with all the studying and homework I have to do,” sophomore Chelsea Parker said. “It’s easier to enjoy the presentations for what they are.”

Additionally, the board contacted a variety of speakers, including Rich Hilleman from Electronic Arts, who presented on Monday during fourth period in the Eagle Theatre. Hilleman has contributed to the EA Sports brand, and speakers like him easily appealed to students.

Presentations this year, held on Monday and Friday, were also 45 minutes long instead of some 90-minute presentations in years past. This allowed speakers to more easily keep students interested.

“I like that [the Science and Tech Week committee] put the speakers on shorter days,” science teacher Karen Davis said. “It’s tough for students to sit still for 90 minutes.”

Also, students signed up for presentations of their choice during Tutorial on Tuesday.

“It is important for us to … choose lectures [we] are interested in,” junior Egan McComb said. “It is more like college.”

Since potential speakers who received insufficient numbers of sign-ups were not invited to the school during tutorial, it was ensured that the speakers who came were welcomed by an eager and well-attended crowd of students.

“My [students] seemed like they were very excited about a lot of the people coming in,” Davis said.

Additionally, students were involved in the planning of Science and Tech Week. The committee was able to take students’ opinions about which speakers would be most engaging into account.

“The committee would ask us what speaker ideas we thought would be cool and other kids would be interested in,” sophomore Bobby Andris said.

The committee also provided surveys for students to take after each presentation.

“The questions … will be useful in selecting speakers for next year,” senior Isabelle Fisher (Izzy) said.

Organizers of Science and Tech Week should be commended for improving the event and taking student opinions seriously, and this is directly measured by the positive feedback of students.

“[A speaker I saw] opened up a completely new field that I didn’t even know existed,” junior Nick Frangos said.