Catch ‘Em All: Inside the World of Nationally Competitive Pokemon 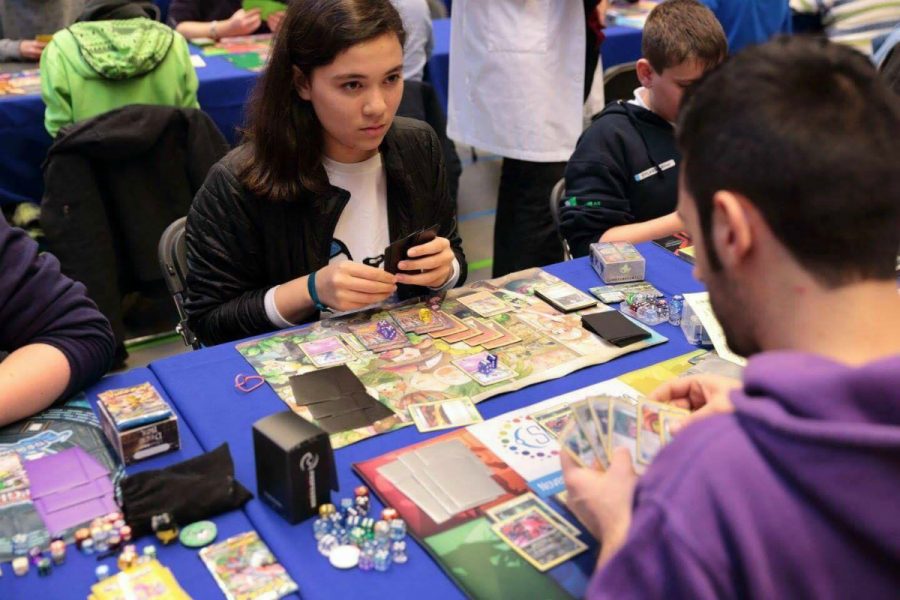 There are basketball pros, and there are fantasy football pros. But then there are also Pokémon pros. Welcome to the world of a favorite 2000s childhood video game, where people in real life play trading cards to “catch ‘em all.” Sisters senior Claire Cheng and freshman Emily Cheng have been playing in Pokémon trading card (TCG) tournaments for the majority of their lives and are currently nationally ranked.

Emily drew her passion for playing Pokémon TCG from her collection of the cards as a kindergartener. What began as a phase became a deep-rooted love for the complexity of the game itself and the tight-knit gaming community.

“My friend gave me a card, and I became thoroughly obsessed with it, and as sort of a means to get me to do extra math prep, my dad would bribe me with Pokémon packs,” Emily said. “So I started collecting until I was eight years old. One day I broke down crying, [thinking that] I really didn’t want to keep holding on to useless stuff because I thought the [cards were] just taking up space, and so my mom was like, ‘Okay then, join league!’”

So while Claire and their mom were at a girl scout meeting, their dad drove Emily out to a card shop in Santa Clara called Game Kastle, which holds weekly league competitions. That same year, Emily entered her first competition, California States at Long Beach.

There are several benefits to playing with a sister. After all, she knows you best.

“It was like one of the first tournaments, and I used to be really antisocial,” Emily said. “I didn’t laugh or smile a lot, and everyone thought I was really scary, and [Claire] just comes in, and she picks me up and swings me around. And they’re like, ‘Oh, she’s human!’”

Claire, laughing, adds on, “And then after that Emily had friends.”

The sisters began traveling nationally, and eventually even globally, from Wisconsin to Arizona and even the Netherlands to enter tournaments. As a result, they have formed close friendships with a plethora of fellow players around the world, bonding over a variety of inside jokes. One of the most popular jokes in the Pokémon community was the banned card of 2015, Lysandre’s Trump, which makes for a self-explanatory Donald Trump meme.

“It’s really interesting because you end up playing people that don’t even speak the same language as you,” Claire said. “But you can still totally communicate because it’s the game you know, so you still understand the same things, you laugh at the same jokes; you’ll both laugh at the Donald Trump memes and the Trump card memes.”

Although the gaming population tends to be widely male, Emily and Claire have not found sexism to be an obstacle in succeeding or having fun with Pokémon. Quite on the contrary, their friends joke around about the margin between female and male players and celebrate the diversity of the community in other aspects.

“All our friends… understand the stereotype that it’s just all nerdy guys who play, but it’s really not,” Claire said. “The Pokémon community is so diverse… we have athletes, we have musicians, we have actors and actresses, artists, computer scientists, astrophysicists, professional poker players, magicians, even P.E. teachers.”

One thing that the sisters wish more people would understand is that Pokémon, similar to chess, is a mentally and even physically exhausting game. The tournaments operate in half-hour Swiss rounds, which essentially means playing one-on-one games with similarly-skilled players until one reaches a Top 8 group. As a result, players usually do not eat throughout the entirety of the game.

“[Playing Pokémon] makes you very good at standardized testing, because those [tests] just seem super short,” Emily said. “It really is like a long mental exertion. My friends are like, ‘How can you be tired after that? I do sports for a long time, [and] you don’t do anything,’ but actually you really are [exhausted]. And then the hunger kicks in.”

Currently, Emily is ranked 12th under the Senior category in the United States. She is therefore qualified in the top 16 in Pokémon TCG World Championships and plans to continue playing through high school and well into the future. Claire, on the other hand, has decided to take a break during her time in college, but hopes to return to the game eventually. However, their love for the game only grows stronger.

“I think it’s our friends that make it worth playing, because the game itself is mentally challenging, and then in between rounds, and even when you’re not at tournaments, you get to spend time talking to your friends online about better strategies,” Claire said. “We just have a lot of fun together, and we get to travel all over the place to play, so it’s really nice.”