Casualties of misunderstanding: The Vaccine Scare 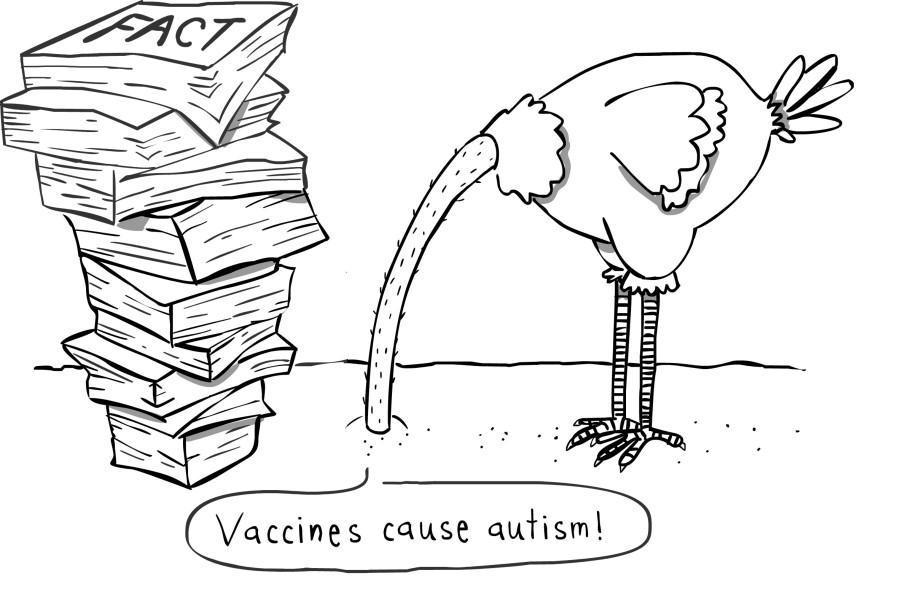 A baby drowning in needles! Aborted fetuses are being fed to your children! Don’t trust the government!

In 1998, a man named Andrew Wakefield published the deadliest scientific paper of the last 20 years. In it, he details both the medical backgrounds and neurodevelopmental health problems of 12 children, and based on his own diagnostics, makes one damning claim: there’s a link between autism and the widespread MMR (measles, mumps, and rubella) vaccine.

As a parent, or a potential parent, what would you have done? Babies were being born. People didn’t have time to do their own research.

They read the headline, “Science links Vaccines to Autism,” and a growing trend against vaccines was born. It’s not fair to condemn these panicked parents — they thought they were doing the right thing. But they were wrong.

Because Andrew Wakefield was not the pharmacy-fighting expert scientist so many anti-vaxxers believe him to be. The actual story behind his fraudulent claims was exposed by an investigative journalist, Brian Deer, who pointed out flaws in the research, the peer-review process and even in the author himself.

It wasn’t even a scientific study. It was simply a description of a dozen children, all of whom, as it turns out, had been artificially selected by anti-MMR campaigners! It had no controls. No experiment. The “evidence” was based on biased parental recall, which was later found to have been extensively falsified by the lead writer, Wakefield. Many of the co-authors listed on the study to give it more credibility had almost no involvement in the process, and even less revision of the final document.

So why did he write it? Because Andrew Wakefield had a massive conflict of interest — prior to his experiment, he was approached by a lawyer, Richard Barr, who essentially hired Wakefield to write a paper that would link MMR to autism. Not only would the duo be able to sue the vaccine companies, but they would also be able to fund a new company providing diagnostic tests for this correlation — a predicted turnover of about 50 million dollars per year.
50 million dollars. What would you do in the name of science?

In 2010, following these revelations, Wakefield’s article was retracted by the journal that published it — an incredibly rare occurrence in the medical research industry. His medical license was revoked. Since publication, dozens of independent articles have disproved his hypothesis, analyzing over 14 million kids in total. In case you missed that: Wakefield examined 12 unfairly selected children, and scientists have since looked at millions. No evidence has been found for a link between autism and the MMR vaccine. None at all.

That should have been the end of the story.

But since 1998, the rumors have exploded. One small paper has evolved into a massive web of dubious science and fringe theories.

Encouraged by the fear-provoking media coverage of Wakefield’s article, a network of fraudulent websites now exists dedicated to exposing the “evil” of a medical device responsible for saving millions of lives. Some of the leaders of this movement are out for profit, selling “alternative medicine,” while others are simply victims of a self-perpetuating cycle of bias reinforcement.

It’s very difficult to convince anti-vaxxers that they’re wrong. Many of them talk about a conspiracy of doctors and industry workers known as “Big Pharma” that is out to harm children and steal money. As a result, many harbor a strong distrust of formal medical science and all the evidence behind it. Without a strong factual basis to stand on, they focus instead on biased studies.

But this is not an attack on anti-vaxxers; many of them are good, concerned parents who are simply worried about their children.

This is an attack on ignorance.

Because it’s hard, right? Scientists like to hide their facts under mountains of data, with conservative conclusions: “an analysis of 29,000 children did not find any substantive evidence for a link between autism and the MMR vaccine.”

Meanwhile, anti-vaxxers use emotional appeals to scare people into subscribing to their cause: “FACT: VACCINES ARE KILLING OUR KIDS.” Which headline do you read?

But why do I care about this? Why should you? Shouldn’t people be allowed to pursue their own medical paths?

There are people who cannot receive vaccines for medical reasons, such as immune deficiency or allergies. These exceptions rely on a phenomenon known as “herd immunity” — the concept that if a very high percentage of the population is vaccinated and therefore immune, then disease will be unable to spread. The Center for Disease Control strongly recommends that at least 95 percent of a community is immunized. By choosing not to vaccinate their kids, anti-vaxxers threaten this entire structure.

For example: in 2014, a group of children in Disneyland whose parents decided not to vaccinate them, spread a preventable disease, measles, throughout the amusement park. Many of their victims were infants who were too young to receive the vaccine — casualties of ignorance.

Anti-vaxxers have a lot of legitimate-sounding arguments. The ingredients in vaccines are toxic! Vaccines are derived from aborted fetuses! Babies can’t handle the demanding vaccination schedule!

These are scary headlines. They’re also completely untrue — but don’t take my word for it.

Do a google search. Check out an infographic. Watch a video. If you’re feeling brave, read a research paper. People get scared by things they don’t understand. So we have a responsibility, not just as potential parents but as intellectuals, to educate ourselves.