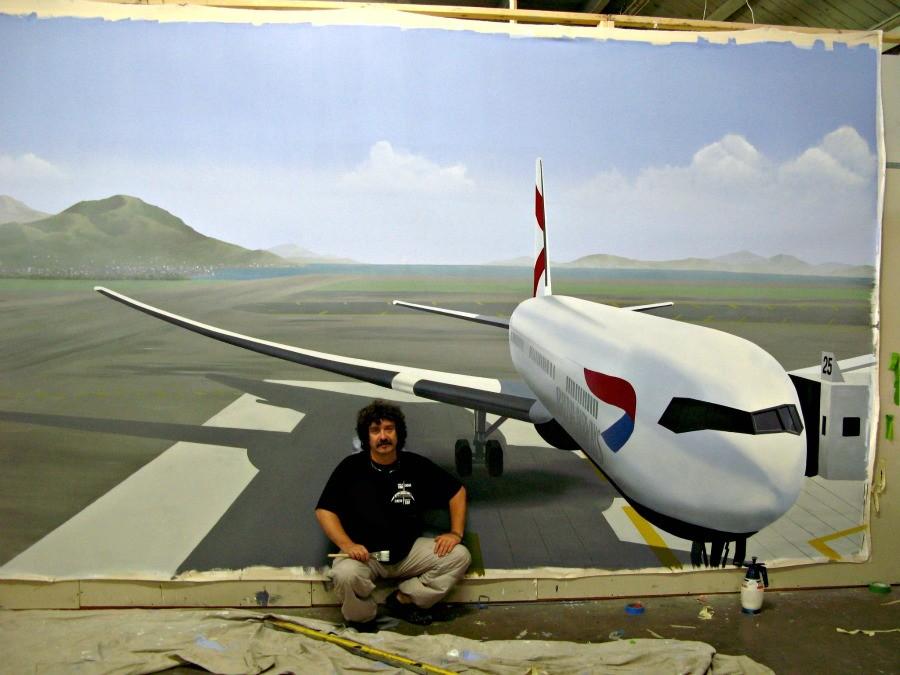 STEM week keynote speaker Andrew Johnstone possesses something unique, something precious. Bushy mustache and Scottish accent aside, Johnstone exudes one particular characteristic above all others: passion for the eccentric.

Since 2005, Johnstone has been the designer of “The Man,” an art piece displayed and burned annually at the famous Burning Man music and arts festival in Black Rock, Nevada. Though his past careers include diving for Greenpeace and teaching at Berkeley, Johnstone has long held an affinity for art.

“I’ve always been an artist; my wife says I’ve never had a real job,” Johnstone said. “If you’d asked when I was 8 years old what I was going to be, [I would have said] I was going to be an artist. I didn’t want to be a lumberjack or anything, that was it. It was just a question of ‘when,’ not ‘if.’”

Johnstone is an adamant advocate of art’s innate position in human society, but he acknowledges the shift toward a more technocentric appreciation and presentation.

“There’s always going to be a place for oil paint on canvas or a sculptor’s hand,” Johnstone said. “That hand-done, touched-by-an-artist experience is always going to be a part of humankind; it’s been with us for 30,000 years, since we started painting on cave walls in the south of France. And it will continue. It’s part of our DNA. But we’re in a revolution right now. It’s not like we [just] paint and stick it in a gallery; we can paint a painting and put it online, and millions of people can see it.”

Even aside from Internet promotion, Johnstone is no stranger to the more left-brained topics of STEM week. Technology, particularly 3-D modeling, largely shapes Johnstone’s work today for Burning Man and beyond. He specializes in trompe l’oeil, a style of realistic muralism that utilizes perspective geometry and the optical properties of light to deceive the eye into perceiving the artwork as three-dimensional.

Once an apprentice receiving a classical education in decorative arts, Johnstone was initially hesitant to make the switch from chalk on wall to mouse on computer screen. But as soon as he did, he was captivated.

“I was hooked immediately. My head always worked in 3-D so, immediately, I was just taken in,” Johnstone said. “And now if I’m working on a computer and I’m not in 3-D I feel like there’s something missing. I think working smart is better than working hard, so I like to use technology as much as I can to work smart.”

Johnstone acknowledges the various factors that constitute a fulfilling and enthralling lifestyle, but above all, he values the pursuit of happiness.

“I think it’s important to follow your passion,” Johnstone said. “I can’t imagine doing something that I didn’t completely, completely adore for eight hours a day. I just couldn’t do it; my spirit would be crushed. So I say follow your bliss. Rely on the fact that if you are passionate about what you’re doing, then the rewards will come.”

Johnstone will continue to pursue artistic expression with undiluted fervor, promoting art awareness and appreciation. He will spread his love of the craft to the next generation of artists through a dynamic combination of STEM and art.

“When we dream at night, we don’t dream in ones and zeroes,” Johnstone said. “And it’s instinct, it’s part of our DNA. It’s not that I can’t imagine a world without art, but I don’t think that the human world is possible without art. It’s part of who we are. It kind of defines us as a species. If we were anthropologists and looked at mankind… as an outsider, we’d go ‘This is the creature that can use tools to create art.’ That’s what defines us.”

Johnstone has been the apprentice of Bill Holgate, decorative artist extraordinaire. Though the experience largely fueled his passion for art, Johnstone says that Burning Man was the catalyst that unleashed his true creative self and modeled him into a truly artistic being.