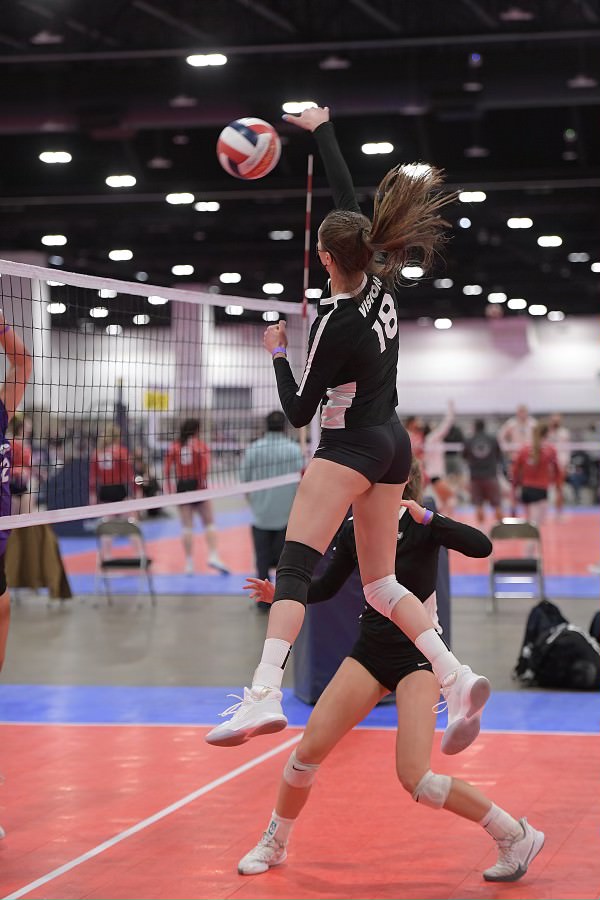 Senior Emma Symon has loved volleyball ever since she started to play in her freshman year. Now she is committed to play for Dartmouth's Division 1 program.

The bleachers of the gym are filled with pink-clad fans cheering on Los Altos High School in the much-anticipated second game against Mountain View. It’s the second set of the game and LAHS is only up a few points with Mountain View trailing close behind. The ball sails over the net to junior Shannon McCabe, who slides onto the ground to catch it and sends it flying up into the air for junior Megan Wong to set it. Senior Emma Symon approaches the net and slams the ball onto the floor of the other side, winning the second set for the Eagles.

After seeing her play, it is no surprise that Emma is one of Dartmouth College’s newest volleyball recruits. But what is surprising is that she played her first game of volleyball a little over two years before she received the offer her junior year, when most varsity volleyball players start playing in middle school. When asked what gave her the confidence to start playing volleyball in freshman year, she laughed.

With a height of 6 feet 2 inches, volleyball was an obvious choice for her. To gain as much experience as possible before her first high school season, Emma participated in clinics and camps over the summer. That is where she met current varsity coach Peter Kim, who can easily recall his first impression of Emma.

This sentiment was echoed by JV coach Sammie Thompson.

​​“She was tall, but really determined,” Thompson said. “A little bit uncoordinated.”

Thompson also met Emma the summer before her freshman year and coached her first and only JV season. She entered that season with not even a single game under her belt. She emerged with a passion for volleyball and threw herself into the club season at Vision Volleyball Club, getting more involved in training, coming early to practice and staying after to work on skills.

“I know that she was working, I think, pretty much every day, with one-on-one training, beach training and gaining as much knowledge as she possibly could,” Thomspon said.

When she started her sophomore year, she was the starting middle for the varsity team — blocking balls from sailing over the net and joyfully slamming the ball onto the opponent’s side — and has played the position ever since. And it was at this time that she began to think about playing in college. Various college coaches had seen Emma play at tournaments before and had already talked to her club coaches. That summer, she received a text from the girls volleyball assistant coach at Dartmouth College, a Division 1 school and one of the top schools in the nation.

From that point on, she and the Dartmouth coach called about every one to two weeks, trying to see if she would be a good fit for the program. She would also send in highlight reels of her playing every couple of weeks. Although she was talking to a handful of schools in the beginning — including a few other Ivies — Dartmouth quickly became Emma’s first choice.

“As I talked to them more, I was like, this is it, this is where I want to go,” Emma said.

This continued until she verbally committed to Dartmouth in the fall of her junior year.

“I just have this feeling, like I know that’s where I’m supposed to be, I know it’s a great match, it’s a great fit for me,” Emma said.

Despite the security her commitment offers, Emma still feels the usual pressures of a high school student — tests, grades and homework — but she’s excited about the future, and so are her coaches.

“She needs to learn more, because when she goes to play against other D1 athletes or other players, she’s going to have to step up her game,” Kim said. “But because she’s determined and competitive, I think she’s going to do well.”

Emma isn’t the exception to the rule, according to Kim. He simply believes she put in the hard work to get to the place she’s in now and offers similar advice to anyone in the same position as Emma her freshman year.