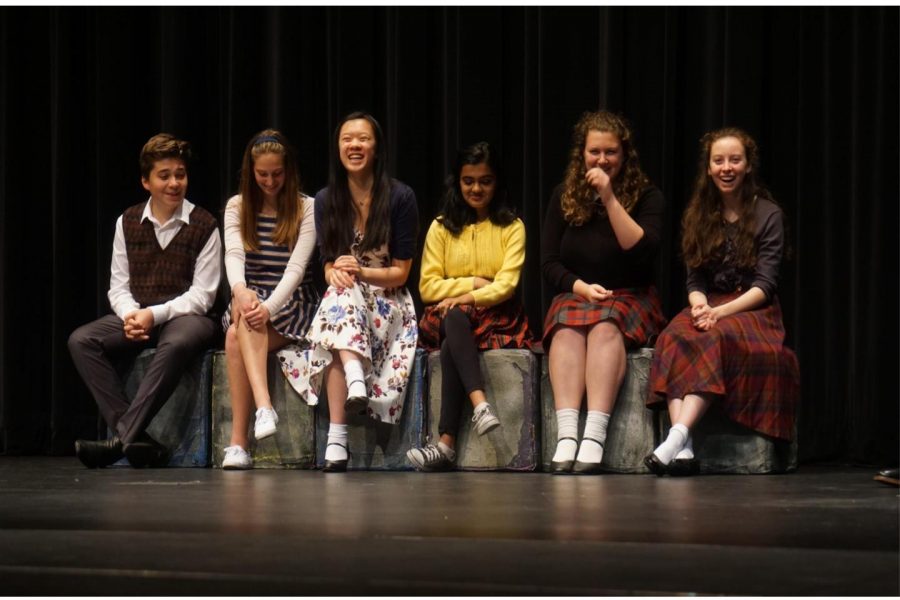 In Broken Box’s new drama, “The Remarkable Incident at Carson Corners,” five new cast members will join the pre-existing onstage ensemble.  For the first time since Broken Box’s comedy, “Museum,” in 2009, the company’s tech crew will play onstage roles in addition to their work in the sound booth and backstage.

The play, written by Kirstin Sergel, depicts a high school student-led trial in an attempt to convict the school’s janitor of murder investigating the death of a boy who fell off a balcony.  The play called for more actors than Broken Box has, so Broken Box director Nancy Moran decided to include the tech crew to fill these roles — some of whom have no prior acting experience.  The decision reveals just how much confidence the whole company has in all of its members.

“It shows a lot of trust in Ms. Moran,” costume designer senior Allison Wang said.  “She trusts us enough to take our job seriously and be able to balance the workload we have as techies with being onstage, and she trusts us to take [the play] so seriously because a drama requires so much more maturity [than a comedy].”

Moran set aside smaller roles for the tech crew, and they auditioned monologues or scenes at the same time as the actors to determine which of the roles set aside they would receive.  Stage manager sophomore Sydney Enthoven received the largest of these roles after flexing her seven years of acting experience in a monologue, and the rest of the tech crew will play high school students and witnesses.

As the company began blocking their play, the tight-knit company easily incorporated the tech crew into the onstage cast. Actors assisted the members of the tech crew who were new to acting with anything from memorizing lines to providing pointers on how to project, along with cracking jokes with them and treating them like any other actors. Being on stage together for blocking also brought the tech crew and the onstage cast closer together.

“I hadn’t really gotten to interact with a lot of other people in the class before except for the tech people,” Sydney said. “So it was really nice to meet all the other people and be able to have friendships with the actors I wouldn’t have been able to have otherwise.”

On days when they aren’t onstage blocking their scenes, the tech crew continues work on their respective tech positions.  While balancing acting and their usual tasks resulted in taking more work home than they typically would, they all agree they wouldn’t have it any other way.

For sound designer sophomore Tom Hocquet, being onstage and away from his typical position came with a surprising benefit.  He found being onstage and hearing the sounds he created on the large speakers of the stage — as opposed to through the small speaker or laptop that he previously heard them through — actually helped him fine-tune the sounds when he got the chance to return to the sound booth.

Sydney worked on writing lighting notes for theater manager Myles Rowland to control in the booth during the show.  She, along with almost all of the cast, will remain onstage for the entirety of the show, and actor senior Reese Toomre feels this feels even more like the tech crew is part of the company.

“It’s nice that it really is the entire cast for the most part,” Reese said.  “It’s not just everyone but the techies, which is what it sometimes feels like.  It’s also impressive to me that they’re able to balance doing lights or sound or costumes and still being onstage and trying to figure that out.”

“Techies are really flexible with anything,” Publicity Manager sophomore Mia Van Deloo said.  “We can run behind the scenes, or we can be onstage, we can be anything people need us to be for the show to run smoothly. I think being able to adapt to that and all the actors embracing that shows Broken Box is a community and that we support each other and we all have the same goal.”