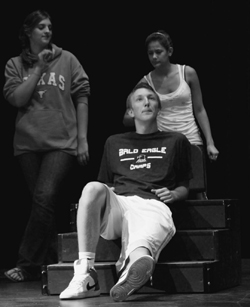 Junior Lauren Bednarski and seniors Sean Small and Katarina La Poll act out a scene of the new play, “Alice in Wonderland.”

To the average student, the prospect of homicidal cards and anthropomorphic doorknobs may sound like a bizarre concept, if not an appealing escape from monotonous school life. These characters, however, are only some of many others portrayed in the upcoming Broken Box play “Alice In Wonderland.”

The show, which will be the opening play of the year, is a combination of Lewis Caroll’s original novel “Alice In Wonderland” and his second book “Through the Looking Glass.” According to drama teacher Nancy Moran, the script will incorporate characters from both stories, ranging from the more well-known Mad Hatter and the Cheshire Cat to the infamous Humpty Dumpty and the White Queen. The storyline, dotted with impulsive jumps and sudden plot changes, remains faithful to the characteristic spontaneity of Lewis Carroll’s original novel.

“The story consists of the same twisted wordplay and crazy logical nonsense that was in the book, which is great for both children and adults to enjoy,” said junior Michael Vendelin, who is playing the Mad Hatter. “To sum up the whole play in one word, I would have to say ‘silly.’”

According to Moran, the crew began rehearsing in mid-September and continues to do so every sixth period. In addition, they meet up on several Saturdays to work, paint and decorate the set. From Monday, November 16 to Wednesday, November 18, crew members will participate in evening rehearsals from 4 to 9 p.m. Actors will dress up in full costumes and make-up, adjust lighting and sound and spend the time adding the final touches to the play.

“Basically, each show is prepared for in this order: blocking, memorizing, running, tech week and shows,” said senior Emma Carr, who is playing the Queen of Hearts. “Once the play is casted, we prepare for the performances by planning the movements that will be performed in each scene and running it many, many times. The thing that helps the most in preparing for the show is running it a lot. That way you get more familiar with the show, and you can spend more time with your character.”

All members of Broken Box are guaranteed a role in the play or as part of the Tech Team. According to Moran, the crew this year is filled with exceedingly “high energy.”

“I love the first show of the year, because it’s usually fun and comedic,” Emma said. “It’s a nice way to kick off the Broken Box year and bond with everyone. An upbeat, kid-friendly show is a good way to get everyone comfortable with each other and on the stage.”

Moran agrees and believes that starting the season with a childrens show enables the actors to get to know each other and adjust to the set in a challenging and entertaining way.

“The idea behind the class is that it is a working acting theater company, so I really want them to have the experience of putting a show together from beginning to end,” Moran said.

Viewers can expect an engaging show with a nonsensical storyline that is significantly different from its Disney counterpart. According to cast members, the script has been simplified and will appeal to viewers of all ages.

“What’s unique about the stage production is that many of the witty riddles that were left out of the Disney version are present, making it much more attractive to adults,” senior Sean Armstrong said. Sean is playing the White Rabbit, the royal herald who experiences certain difficulties with reaching appointments on time.

“I’ve always been a huge fan of the story and the characters,” said senior Natalie Hon, who will be playing Alice. “It’s so creepy and twisted when you really read into it, even though it’s a happy children’s story on the surface.”

The play will run from Thursday, November 19 to Saturday, November 21. Tickets will be $5 in advance and $8 at the door.