Broken Box climbs to the stage in “Up the Down Staircase” 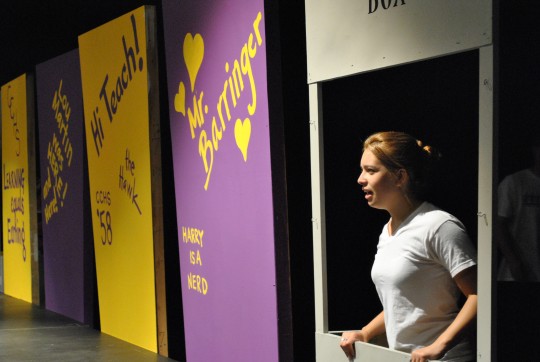 Broken Box gave the first performance of its show “Up the Down Staircase” last night. The play is an adaption of a 1965 humorous novel by Bel Kaufman. The story takes place in a 1950s inner-city public school where an English teacher tries to make a difference in her unmotivated students’ lives.

Senior Mikey Vendelin, who plays nerd Harry Kagan, called the show a seriocomic, meaning it is a blend of comedy and serious themes. Senior Josh Sims, who plays one of the class clowns/bullies, said that the show is “hilarious” but that “there’s all this emotion.”
“It touches the heart and tickles the belly,” Josh said.

Senior Lance Rodriguez described the show as a heartwarming piece that creates a connection to the mainstream media view of high school.
“If you turned Freedom Writers into a comedy, this would definitely be your thing,” Lance said.

Though the set never changes throughout the story, Lance said the show requires high “maneuverability” because of the great number of desks, platforms and other props that need to be moved around.

Lance plays English teacher Paul Barringer, who represents the opposite side of understanding teens from that of Sylvia Barrett, played by senior Jasmine McGee.

She is playing a lead role for the first and last time since “Up the Down Staircase” is the last Broken Box show of the year and the last one ever for the seniors.

The theater company decided not to do a modern adaptation but instead keep it in the time period in which it was originally set. But wearing leather jackets is not all the performers have to do to ensure authenticity of setting.

“As actors we’re going to try to carry the essence of how kids would react because we don’t really have the experience of living in those situations,” Josh said.

Some students from Acting I joined the usual Broken Box cast for “Up the Down Staircase” to the high number of roles that needed to be played. After consulting the Broken Box class, drama teacher Nancy Moran personally selected some students that she felt would be able to step into the role, Josh said.

Freshman Amanda Shantz, sophomores Amanda Spielman, Blaine Dzwonczyk, Nikki Kashani and Sarah Rabin, junior Will GrosdeMange and seniors Joey Giacomini, Mat Snider, Darren Franke and Miguel Carrillo are all joining the normal Broken Box members to make up the cast of “Up the Down Staircase.”

Director Nancy Moran is featured in the show as the school nurse, Frances Egan.

All actors and behind-the-scenes members have worked hard up to this point to prepare a stage-worthy show. They used method acting and improvisation exercises to train themselves to bring the characters to life in an authentic way.

In a piece where blocking is as significant as the spoken script, much of the play involves acting without written dialogue.

“You see the script and you follow the lines, but there’s a lot of room for interpretation,” Mikey said.

For instance, Josh finally gets to throw paper airplanes at Mikey’s head because it’s part of his character.

“Everyone can just be themselves,” senior Charlotte Byrne-Bailey said.

Showings of “Up the Down Staircase” continue Friday at 7 p.m. and Saturday at 7 p.m. Tickets are $5 in advance and $8 at the door.