Bringing Books to the Big Screen 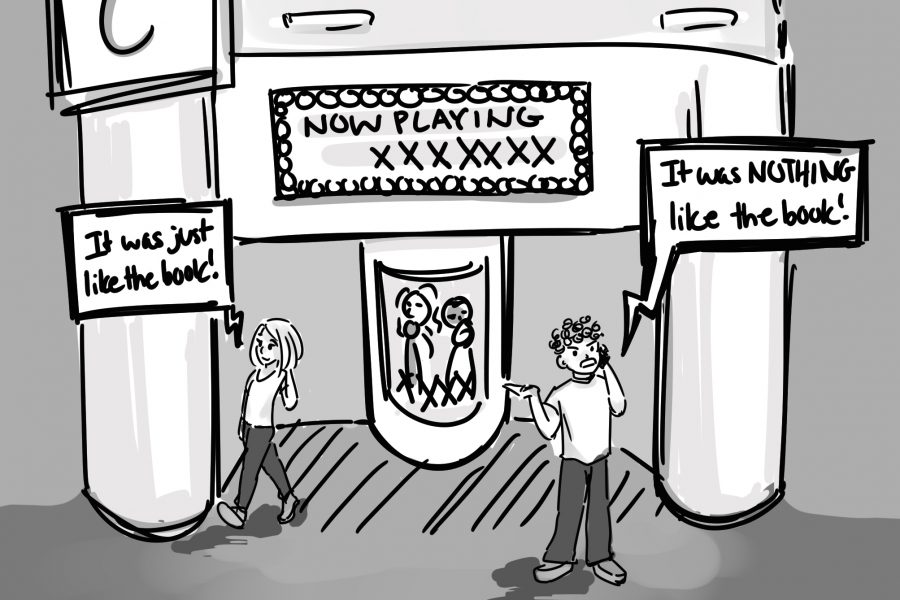 By Justin Yu and Priya Dixit

From treasured classics to trending young adult novels, successful books inevitably receive the Hollywood treatment. “Lord of the Rings,” “Harry Potter,” “The Hunger Games,” “Percy Jackson” — the list is endless. The dedicated book lover would like to imagine that producers and screenwriters spend hours poring over the source material, extracting the essence of a beloved book and adapting it seamlessly from the page to the big screen. Yet the same book lover has most likely experienced jarring disappointment just as frequently as delight when the resulting movie arrived in theaters.

Disparities between the original source material and the adaptation are unavoidable, at least in terms of feasibility. But how many of those changes are justifiable? How many tweaks to the plot, scenery and dialogue irrevocably mar the adaptation as the changes obscure the brilliance of the novel?

That being said, the opposite can occur as well. The adaptation may complement the original story, drawing in new fans and satisfying existing ones. The panoply of existing book-to-movie adaptations runs the gamut of adaptation techniques, some more effective than others.

Take “Harry Potter and the Goblet of Fire,” for instance. The 636-page book was adapted into a movie with a two-and-a-half-hour runtime. With a significant portion of that runtime needed for building the film universe and adding exposition for a streamlined version of the plot, the film sacrificed elements of the book’s plot points in order to present a seamless, complete story to the audience. For example, the producers decided not to include Dobby, a supporting character who plays an important role earlier in both the books and the movies. In the books, he appears throughout the series, whereas he disappears in the movies between the second and final films. Thus, Dobby’s death, while still significant, feels out of place because moviegoers did not build the same connection with the character that book-readers did. Nevertheless, the character’s absence did not disturb the overarching plot.

The ability for an adaptation to retain its continuity even with parts of the book removed plays a key role in the success of the franchise As a whole, the “Harry Potter” adaptations capture the magic of the books, balancing between removing certain details to maintain the coherence of the film and remaining true to the source material.

On the other hand, the “Percy Jackson” movie adaptations do this miserably, and as a result, they simultaneously disappointed readers and failed to generate their own fan base. This is primarily due to a variety of poor casting choices and questionable decisions to remove vital plot points. Specifically, major characters Clarisse and Ares were excluded from the first movie, and efforts to introduce them in the sequel felt forced. Production for the series ended at book two of five due to poor earnings at the box office, a clear symptom of the directors’ inadequate inspection of the original books.

An alternative method used for adapting plot heavy novels such as “Harry Potter and the Deathly Hallows” and “Mockingjay” from the “Hunger Games” trilogy is to stay as close to the text as possible by splitting the film into multiple parts. While this decision is in many ways financially motivated, these two adaptations demonstrate effective portrayals of the author’s original vision. Both significant and subtle plot points that would have been excluded were incorporated into the films, allowing the intent of the books to shine through.

On the other end of the spectrum, “The Hobbit” movie trilogy shows how separation can actually detract from the film’s integrity to the original novel. The movie trilogy transformed 300 or so pages into a grueling, six-hour ordeal of battles and watery allusions to “The Lord of the Rings” movie trilogy. In the final film, Legolas seemingly defies gravity by hopping between pieces of fallen rubble, and it’s hard to believe that this is not a result of the director’s decision to extend 20 pages of the original novel into a two hour-long film. Thus, the original charm of the adventure is lost in favor of an action-based trilogy made to attract today’s moviegoers.

Evidently, the various adaptation techniques have their own pitfalls, and each is inherently limited by film as a medium. While adaptations should remain faithful to the original novels, they should also present original themes that combine the author’s intent with the director’s style. Adaptations should not be made with the sole intention of profiting off already successful franchises and existing fanbases. That being said, adaptations should do more than adhere to the novel line by line. At the end of the day, an adaptation should breathe life into the pages of a favorite novel and realize fantasies for fans, new and old alike.