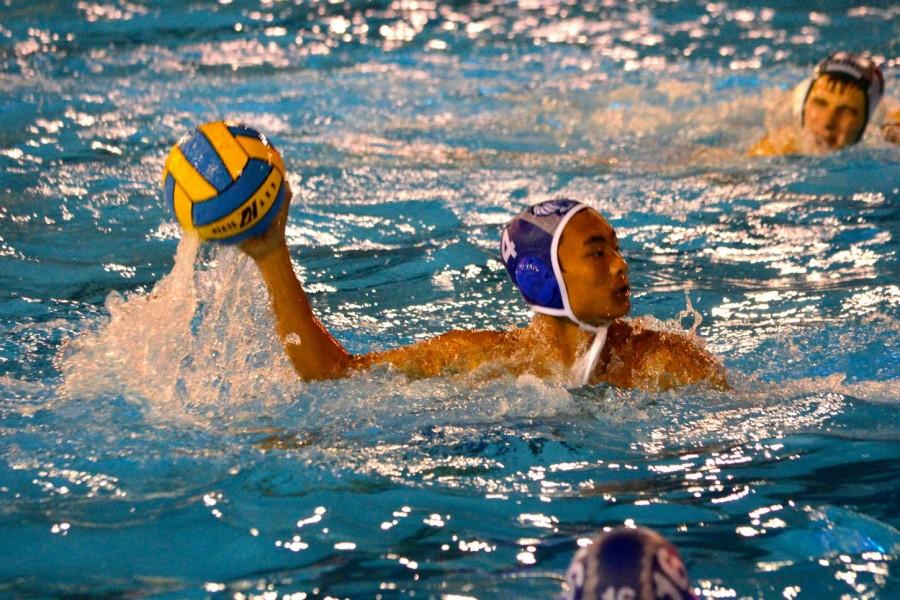 One of the members of the team honored at Senior Night, senior Patrick Fong prepares to make a pass. Photo by Kunal Pandit.

On Tuesday, October 27, the boys water polo team lost to the Palo Alto Vikings 10-12 finalizing their league record at 6-6. Despite the game being the last home and league game and senior night, the Eagles could not catch up to Palo Alto.

“The whole game was super exciting at it was actually a lot of fun,” junior Ryan Fisse said. “Even though we lost, it was a really good competitive game, and I’m pretty happy with our performance… We [played] really well and kept up with them.”

Palo Alto won the first sprint, but sophomore Eric Warmoth recovered the ball and assisted sophomore Kyle Sandell for the first goal of the game. Ryan added to the lead making it 2-0, but Palo Alto scored four unanswered goals and the quarter ended with the score 2-4.

Going into the second quarter, Palo Alto kept up the attack and beat the Eagles’ defense three more times. The Eagles came back with three goals of their own from Eric, junior Nick Rodriguez, and Ryan once again. At halftime, the scoreboard read 5-7.

At the start of the third quarter, junior goalie Vishnu Ram blocked a backhand attempt, but Palo Alto would score once again to make the score 5-8. Nick brought it one closer, but Palo Alto added four goals to stretch their lead to 6-11 going into the last quarter.

The Eagles went on a scoring streak in the fourth quarter bringing the game to a 10-11 tie. Senior captain Jim Hollingworth converted a 6-on-5 opportunity with shot off the bar and in, and goals from Eric, Nick, and Ryan came right after to bring Los Altos within one. However, Palo Alto scored once more, putting the game out of reach with a score at 10-12.

Despite losing such a big game, the Eagles celebrated their seniors—Jim and Patrick Fong—for their dedication and passion toward the team.

League play for the season came to an end with this last game against Palo Alto, and the Eagles will find themselves back in the pool once again preparing for league finals and possibly even CCS.

“Instead at looking back at this [game], I’m looking ahead to league finals and making sure we are able to perform in those [games]… like we did in this game when we went on a [scoring] streak.” Ryan said.