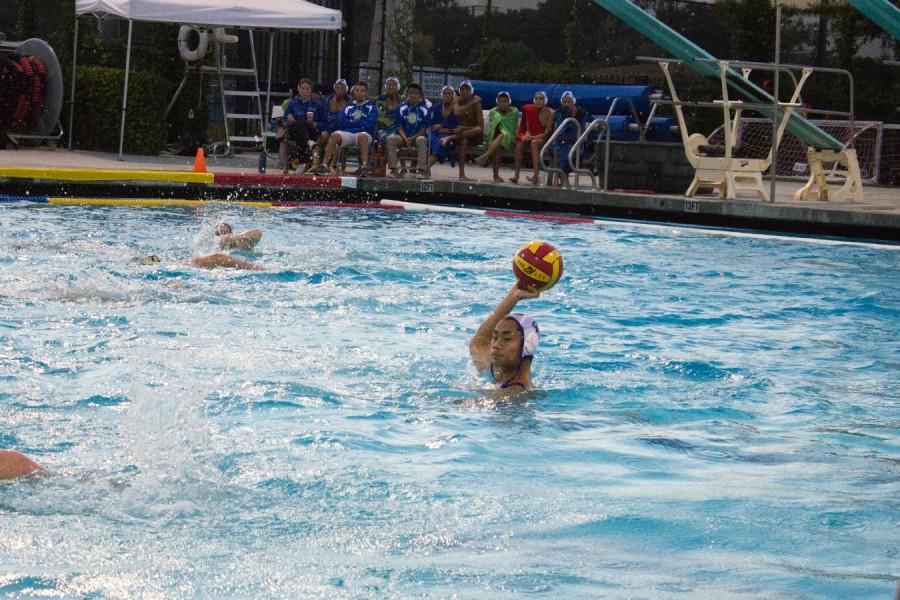 Senior Patrick Fong looks up the pool to make a pass. Photo by Kimia Shahidi.

The varsity boys water polo team played against Mountain View at Gunn on November 7 in third place games, but due to the point system from league play, the Eagles earned second place overall. Los Altos edged out the Spartans by one point with a final score of 6-5.

The Eagles faced the Spartans for the third time in the season; Los Altos won both games during league play with scores of 8-4 and 8-7.

“It was a tough game,” junior Nick Rodriguez said. “It’s always tough to beat a team three times in a row, and last time we went into overtime with them so we knew this was gonna be a tough game. We came fired up and we both fought hard so it just came down to who wanted that game more.”

The Eagles began the game on a good note with the first goal from sophomore Kyle Sandell. As water polo is known for its physicality, both teams saw the game’s first penalty shot awarded to Los Altos within minutes of the first quarter. Senior captain Jim Hollingworth converted the opportunity by skipping the ball past the Mountain View goalie to put Los Altos ahead at 2-0. Toward the end of the quarter, Mountain View scored to make the score 2-1.

In the second quarter, the Eagles went out on a three-goal streak showing off their widespread talent in the team. After being passed the ball, Kyle quickly sent it over to Nick for an immediate catch-and-shot. Later on, senior Patrick Fong attacked center cage and skipped the ball for a goal. The Eagles displayed great teamwork and ball movement passing the ball between each player on the perimeter, Jim entered the ball into set where Kyle shot a crosscage backhand.

Halfway through the second and at 5-1, Mountain View went off on scoring streak of its own, scoring three goals to put the score at 5-4. At the end of the half, two Eagles were ejected and gave the Spartans a 6-on-4 opportunity at the start of the third quarter, but due to the Eagles’ solid defense, Mountain View was not able to capitalize.

“We played really good defense, some of the best this year because we communicated and played together as a team,” sophomore Eric Warmoth said.

Going into second half, sophomore goalie Connor Brett made two big saves on a lob attempt and an outside shot. The latter save pushed the Eagles offense and led to what would be the deciding goal by Nick. However, the Spartans scored to make it a one goal game for the last quarter.

“We just had one quarter where we came out with everything and took a three point lead but they came back to tie it up,” Nick said. “When we took our one point lead in the third quarter we just fought our hardest to keep that and we did it.”

The fourth quarter was scoreless on both sides and the Eagles won 6-5.

“It was a huge win for us because it means we ended our league season in second place and we got a good spot in CCS,” Nick said “If we had lost that we would have been fourth place with some bad seeding for CCS. I mean the win was a little too close for comfort but we got the job done and we beat our rivals which is also huge because last year their team beat us both times we played them so it was a good win for us.”