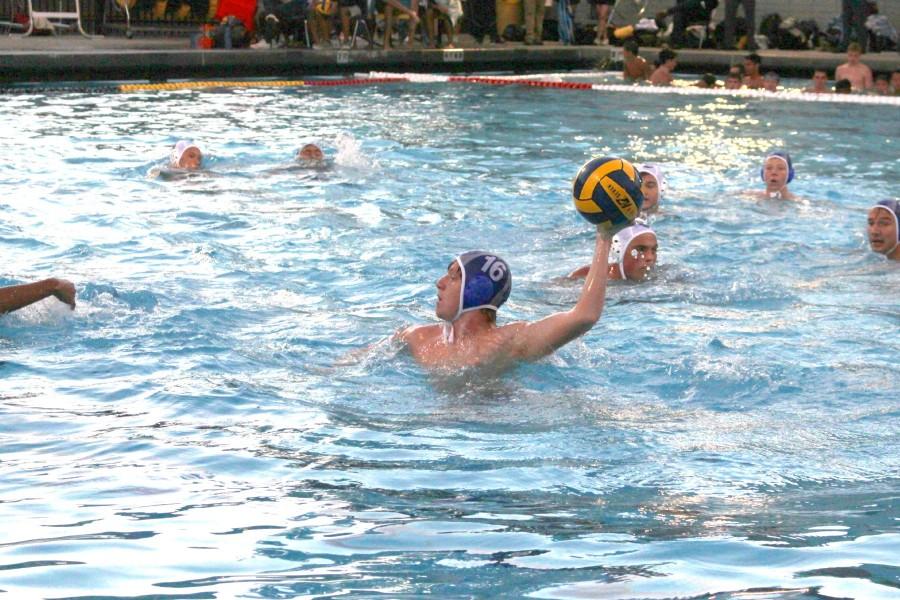 On Tuesday, November 3, the boys water polo team beat the Monta Vista Matadors 9-8 in an exciting back-and-forth battle. With the win, the Eagles are officially in CCS.

Previously, Los Altos played Monta Vista twice during league play and beat them both times, 9-3 the first time and 9-8 in the second.

“I think… we did not show up [to the game] with the right mindset,” junior Nick Rodriguez said. “It was a tough match and it helped show us that just because we have beaten a team before, that does not mean [the next game] will be an easy win. When we beat someone, we aggravate them, and they will surely be looking to get us back the next time we play them. That is something we need to learn.”

Although the first goal of the quarter came from a perimeter bar-in shot from junior Ryan Fisse, Monta Vista immediately scored in the next possession to the tie the game at 1-1. Sophomore Eric Warmoth added to the score, with a high corner, cross-cage shot. After a series of scoreless possessions, Monta Vista went off with a three-goal scoring streak. With a minute left in the quarter, Nick Rodriguez scored to make the score 3-4. After a block from starting goalie sophomore Connor Brett, Eric made a full court shot in the last three seconds of the quarter to tie the game at 4-4.

Going into the second quarter, Monta Vista scored within the first minute, but sophomore Kyle Sandel tied the game back up at 5-5, with a shot from 2-meters in front of the goal. The Eagles could not capitalize on the many power play opportunities presented within the last two minutes of the half, and Monta Vista scored once more in the middle of the quarter to lead 5-6.

Starting the third quarter, senior captain Jim Hollingworth tied the game once again, and, with an assist from Nick, Kyle skipped the ball into the goal to give the Eagles their first lead since the beginning of the first quarter. At 7-6, Connor ended the third quarter making a clutch save to deny a counter-shot attempt from the Matadors.

It was evident that both teams struggled to play their game in the fourth quarter. Monta Vista scored, tying the game at 7-7. Even after multiple timeouts called from both sides in the final minutes, neither team could put it away, and the game went to overtime.

In high school water polo, overtime consists of two three-minute halves. If the game was still tied, overtime would become sudden death, and whoever scored the first goal would be the winner.

In the first half of overtime, Ryan skipped the ball to make the score 8-7, but in the next half, Monta Vista scored as well. At 8-8, the game went into sudden death overtime. Throughout the game, the Eagles struggled to convert their many 6-on-5 opportunities, but in the second sudden-death period, Nick scored the winning goal during a power play thus ensuring the team a spot in CCS.

“I think our team is looking really strong, and [the season] has been a rough for some of us, but we fought our way through each [game],” Nick said. “We managed to make it to CCS, our season long goal, so now we need to work hard and get in [better] shape so we can show other teams what we are really capable of.”

With the win, the Eagles move on to the semi-finals, where they will face Gunn on Thursday, October 5, at Mountain View.