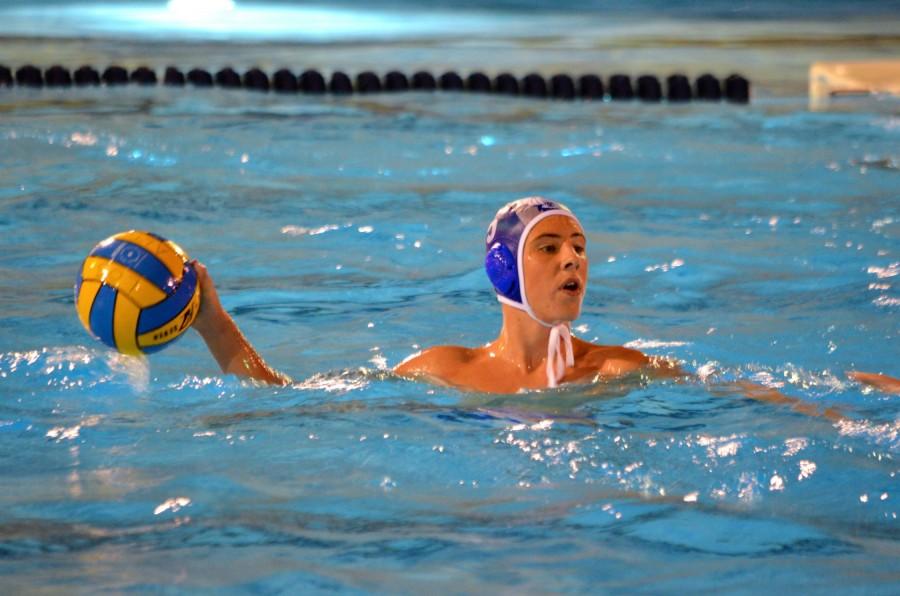 On Tuesday, October 6th, the varsity boys water polo fought an aggressive and physically demanding game against the Palo Alto Vikings. They lost in overtime by a score of 12-13.

The game started out with a miscommunication in the Eagle’s defense that allowed Palo Alto to score first. It was the first of a few costly defensive mistakes Los Altos made over the course of the night.

“I think our defense could have definitely been a lot better, we knew who their main guys were and I don’t think we looked to double team them as much as we should have,” sophomore Kyle Sandell said.

Los Altos evened the score after junior Nick Rodriguez drew an ejection fighting for position in the two meter area. The Eagles capitalized on their 6-on-5 opportunity as senior captain Jim Hollingworth found an opening in the Vikings’ defense and puts Los Altos on the board. sophomore Eric Warmoth scored on a nice pass from Nick later in the quarter, but the period ended with the Eagles trailing 2-3.

Palo Alto started the second quarter on the right note by earning and converting a penalty shot to make their lead 2-4. Jim came back to make it 3-4, but the Vikings quickly scored two consecutive goals to widen the lead. Later in the quarter, the referees awarded the Eagles a five-meter penalty shot opportunity that junior Scott Cairns skipped into the high corner past the goalie’s arms. Moving on from the penalty, Palo Alto scored to make the score 7-4, and Los Altos narrowed the score gap to one with goals by Eric and Kyle. The Vikings had one more chance to score in the half, but sophomore goalie Connor Brett made a stop to take the Eagles into halftime down 6-7.

Los Altos started the second half strong. After drawing a quick ejection, Nick scored to tie the game at 7-7. The third quarter was back-and-forth, with both teams scoring, but with 2:30 left, junior Ryan Fisse skipped one into the back of the cage to give the Eagles their first lead at 10-9.

As the clock wound down, the Vikings attempted a half court shot that Eric easily knocked aside. However, the referees deemed that he had illegally used both hands and awarded Palo Alto a penalty shot. With everyone out of the pool except Connor and the shooter, the Eagle goalie came up clutch, blocking the shot and maintaining the Eagles’ lead going into the fourth quarter.

Los Altos started the fourth quarter strong, adding to their lead with goals from Jim and Nick to bring the score to 12-9. However, the Vikings refused to go away.

Toward the end of the quarter, a series of complications emerged from the timing desk, and the game was paused as the referees met to try and resolve these issues. With a close 12-10 lead, Los Altos played extremely defensively to avoid Palo Alto from scoring again. However, with only two minutes left on the clock, the Vikings managed to score another goal to bring them only one point away from tying the score.

In the last several seconds of the quarter, Tasman called several timeouts to make sure that Los Altos kept possession of the ball, but Palo Alto was able to make a steal in the last seven seconds of the game. With this last possession, the Vikings made one last attempt at the goal, but turned over the ball and were unable to score. Up a point and thinking that the match was over, the Eagles exited the pool and expected the match to be over. However, the Palo Alto coach challenged the final seconds of the game, claiming that the timing officials started the clock early and gave the Vikings less time. The referees restarted the game with seven seconds left, and Palo Alto was able to score a buzzer-beater shot to tie the game 12-12 and bring the match into overtime.

“It was justifiable to challenge the call, but the terms of the decision were [very] one-sided,” Jim said. “They received seven full seconds when the scoreboard error only lost them two, and we ended up stealing the ball, so the time difference had no impact on the outcome of the game.”

The first half of the overtime was scoreless, but Palo Alto was able to score a quick shot from the two-meter position with only two minutes left in the second half of overtime. Los Altos was unable to overcome the Vikings’ defense, and the game ended 12-13.

“I thought we had a very slow start to the game, and we woke up halfway through the second quarter then started playing our water polo game,” Tasman said. “Palo Alto is a very good team, they are defending league champs, so for us to take them into over time and lose by one goal the first time we saw them, I am really proud. “

The team’s next game is on Thursday, October 8 at Wilcox. Their next home game is Tuesday, October 13 against Los Gatos.