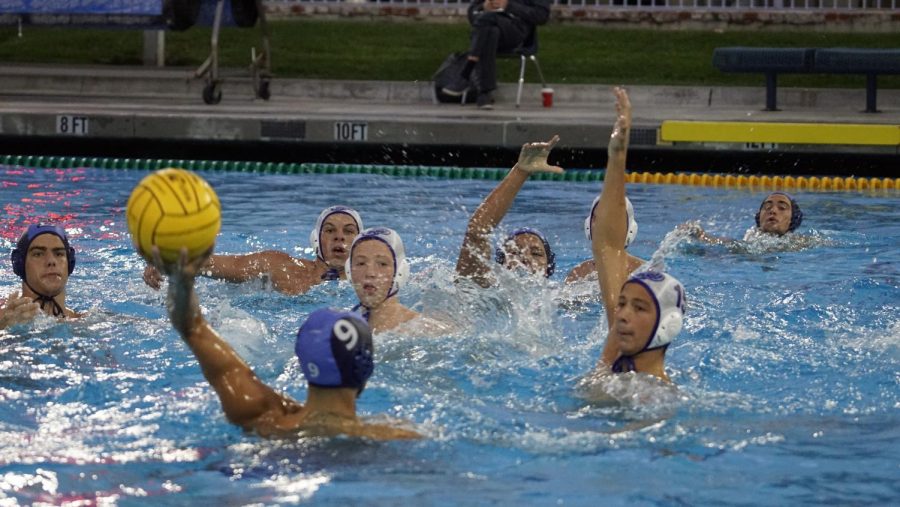 The varsity boys water polo team lost to Bellarmine on Saturday, November 4, in the CCS Open Division quarterfinals, with a final score of 2-11. The game put an end to a historic season.

The Eagles took the title this year as the undefeated league champions of the De Anza Division of SCVAL and ended with a record of 17-0. With their overall record of 24-2, Los Altos earned the seventh seed out of eight in this year’s newly introduced CCS Open Division, which pulls the top eight teams from both Divisions 1 and 2. The majority of the teams competing were private schools, with Los Altos being one of only two public schools to qualify.

“[The game against Bellarmine] really just represents how far we’ve come in four years,” co-captain senior Eric Warmoth said. “Freshman year, I could never have imagined that Los Altos would be in the Open Division of CCS, let alone playing Bellarmine, a team that has been dominant, winning CCS Division 1 for many years. We haven’t had any competition like that this year.”

For the past few years, Gunn High School has dominated the league. But this year, with the graduation of last year’s seniors, the level of skill throughout the league evened out. The title of league champions was up for grabs, and Los Altos managed to step up and claim it, beating Gunn in the championship game with a final score of 5-3.

“It was the first game against Gunn that we realized we could be the top team in the league,” Eric said. “Gunn has been so dominant for the past four years. After beating Gunn, in one of the last games of the first round of league play, it was very apparent that we could be league champions.”

To head coach Seth Tasman, what sets this year’s team apart from previous years is the fact that the group of boys were so selfless and self-motivated. Tasman has not changed his coaching style from the past years and credits the boys’ want for improvement as the reason for the success of the team.

“We did so well this year because the team was the hardest-working team that I’ve coached since I’ve been here at Los Altos,” Tasman said.

Tasman increased the yardage the team swam at the beginning of practices before jumping straight into water polo drills. Their resulting ability to dominate teams with quick counterattacks allowed Los Altos to pull ahead of their rivals offensively and put games away at the start.

“Our swimming time and endurance was getting faster and faster throughout the season, where in the past, we conditioned hard toward the start of the season and kind of backed off,” Tasman said. “But this year, we continued conditioning all the way through and the kids were working hard every single day, and that really helped us in second halves of games where other teams started to get tired, but we kept pushing through all the way.”

Their rigorous exercises improved their swimming, but competing at such a high level inevitably led to injuries. Sophomores Kyle Bistrain and Boris Palant along with senior Nathan Trudeau suffered shoulder injuries that kept them from competing in a few games. Due to the changes in the availability of the players and their strengths and weaknesses, the starting line-up was ever-changing. Tasman saw major improvement from the underclassmen, who proved themselves worthy of playing time.

“The four senior starters had their positions locked in for the entire season, [but] the other two starting spots were constantly rotating based on who was performing best,” Tasman said. “I thought that the sophomores and freshmen that were in the rotation and earned their starting spot did a great job, and I saw no major difference in who I was starting in a game — everyone held their own. And for all these sophomores and freshmen to be competing at this high varsity level shows great promise for the future.”

The opening of two starting positions fostered an environment of friendly competition between teammates. But what made the Eagles a strong team was the fact that every player put the team above all else, whether it be by scoring in a game or cheering from the bench.

“The best thing about our team is that we play as a team,” sophomore Adam Hollingworth said. “Even if you lose your starting spot to someone else, it’s not about ‘I lost my starting spot,’ it’s about ‘How can I make this team better?’ So if you want that starting spot back, you need to improve. I think that everyone is fine with that decision that coach makes to not have them start if that means our team is going to be that much better.”

Next year, the team’s current underclassmen will have to fill the shoes of key senior players including four starters. This includes co-captains Eric and senior Kyle Sandell, who contribute to more than half of the team’s statistics. Though it will be a year to rebuild a great team, the Eagles are optimistic and look back at the season with pride.

“We’ve been playing for so long together as a team that I think working hard in the off-season during club and swim season, I think we can pull together a team that’s definitely strong enough to make CCS [next year],” Adam said.