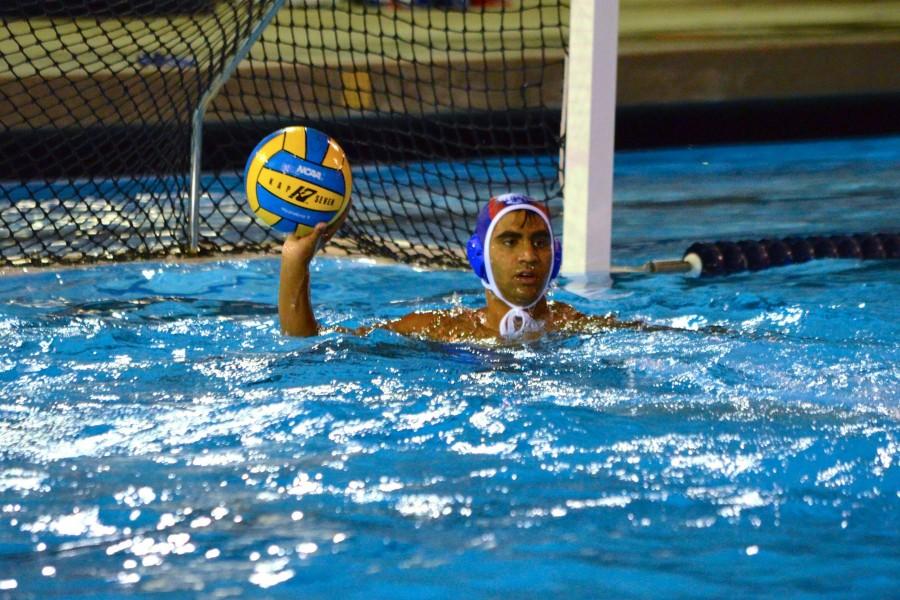 Junior Vishnu Ram looks to move the ball up the pool. Photo by Kunal Pandit.

Tonight, October 20, the varsity boys water polo team took on Gunn, their hardest opponent of the year. Despite a 4-11 loss, the team recognized the opponent’s strength and took the game as learning opportunity.

“Gunn is the strongest team in our league,” head coach Seth Tasman said. “[But] I am happy with our performance… throughout the game, we made good adjustments… I’m really proud of how hard [the team] worked.”

Los Altos’ early play was characterized by errors: passes into contested areas, misreading runs or just general lapses in communication. In recent games, the boys team has had some trouble starting games strongly, and this game was no exception.

“I thought we had a slow first three to four minutes,” Tasman said. “But after that we started picking up our intensity, we started battling a little more in the water… we just need to be a little more mentally prepared.”

Despite the squad’s regular, cohesive play, communication between teammates was an issue tonight.

“We just need to make sure we are playing together as a team,” junior Ryan Fisse said. “And that it isn’t every man for himself both on defense and on offense… we want to make sure we aren’t [all trying] to be heroes and shooting the ball at bad times.”

Los Altos is currently fourth place in the standings, and with two more league games ahead, as well as a non-league tournament in Carmel this upcoming weekend, the varsity boys team is maintaining high hopes for the end of the season.