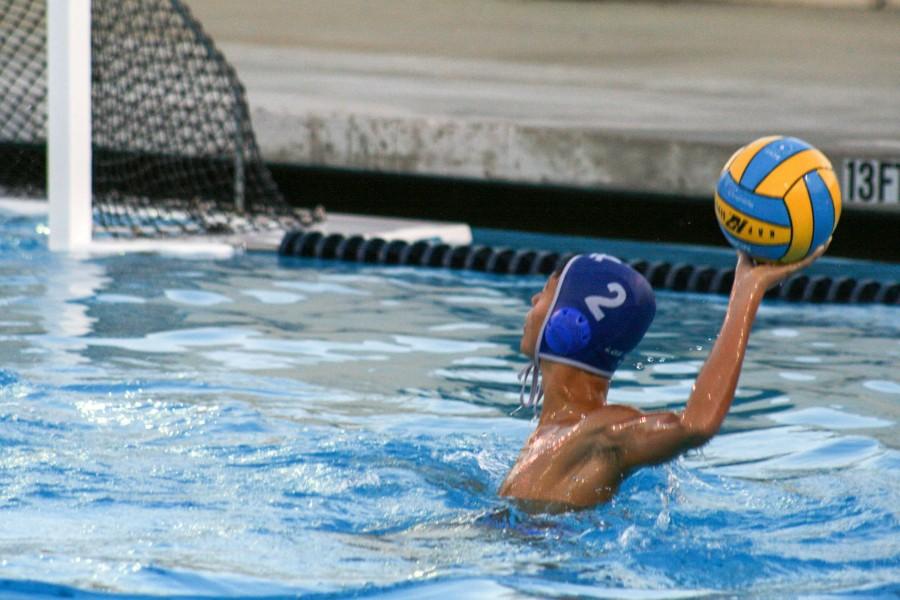 Junior Jean-Luc Quere prepares to shoot at the goal. Photo by Michael Sieffert.

This preseason game was the second that the varsity team has played so far this year after a 18-4 defeat against Menlo Atherton on September 8.

“I think it went really well, coming together for just our second game,” sophomore Eric Warmoth said. “We were really working together as a team and communicating well.”

The game got off to a start in the first quarter with senior team captain Jim Hollingworth hitting a skip shot right into the goal. Sophomore Kyle Sandell followed this quickly with another goal for the Eagles. Kyle would later pick up a another point for a total of 2 points for the Eagles.

“Tonight I thought for the first quarter we were ready to go,” senior Patrick Fong said. “We worked them on defence and I thought it was a really good bounceback game for us.”

Jim led the Eagles in scoring with 3 points. He nearly had several more goals, but hit the post on several shots. The team fought hard and was able to stay on the offensive for the majority of the game. When Saratoga did manage to take control of the ball, junior Vishnu Ram kept them from scoring with several powerful blocks.

Over the game and after numerous unsuccessful shots, Saratoga was able to get 3 shots in. The end was a clear 8-3 in favor of the Eagles.

“I’m really excited for this season,” varsity head coach Seth Tasman said. “Our goal [is to be in] top 4 in our league, which would qualify us for CCS.”

The game closed out with more goals from Kyle and Jim and another goal from junior Nick Rodriguez.

“We could have played better,” Nick said. “It’s a team effort. We know two of [Saratoga’s] players. We play club with them and one of them is one of the fastest players on the [club] team, but we should have taken them down more. They shouldn’t have had [those three goals].”

The game was an indicator of a successful season to come, and the team expressed its desire to improve for the season.

“Saratoga is a really strong team that is normally in our division but they moved down this last year, so it’s good to see where we’re at versus them,” said Tasman. “We just need to have a little more patience and not force so many turnovers. Turnovers are kind of what is holding us back, [so we just need to] clean up our game.”

The boys’ next game will be a league game against Wilcox this coming Thursday, September 17.