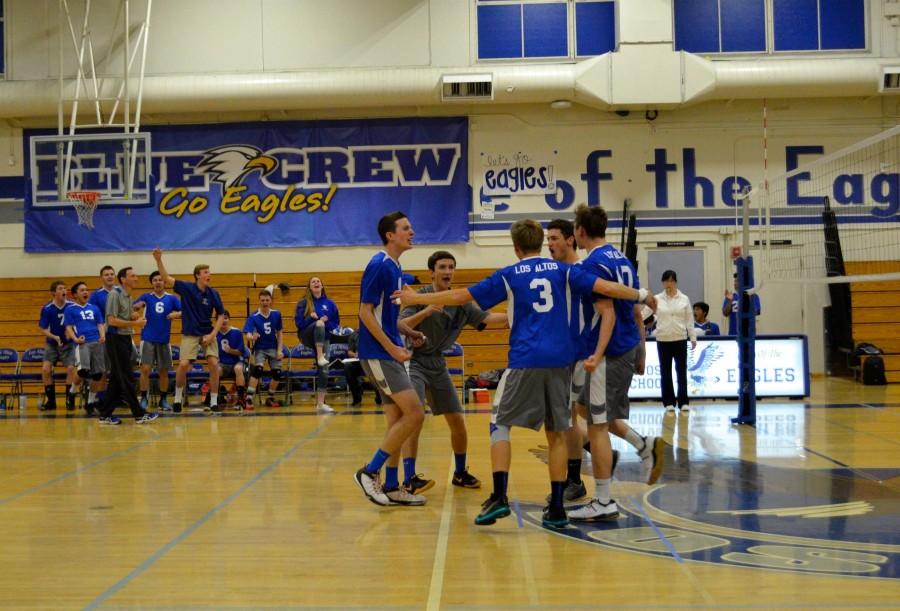 The boys volleyball team celebrates after the game. Photo by Kunal Pandit.

On Wednesday March 30, the boys varsity volleyball team defeated rivals Mountain View in a home conference match with a final score of 3-1.

Coming off of a 3-2 loss to Saratoga away last Friday, the Eagles were looking to come back swinging. After taking an early 5-2 lead, the Eagles began to fade early on and had many bursts of excellence to keep themselves level for the majority of the first set. However, later on, Los Altos showed its true colors, with seniors Nathan Smith and David Stein laying down vital spikes to win the first set 27-25.

“We pretty much wanted to make sure that [Mountain View senior] Colton [Stearns] got shut down, because he is their best hitter,” junior Darion Yusuf said. “So we blocked him a lot actually and we tried to spread the sets around and try to get it to Nathan and Harrison and David.”

The second set was also extremely close with Los Altos trailing for large periods, but the Spartans made many errors to keep the Eagles close. Senior Nathan Larson made a crucial save early on in the set to keep Los Altos in it, and senior Harrison Beck tipped over a shot to give Los Altos the lead 17-16. The Eagles closed out yet another nail-biting set to take a 2-0 lead in the match.

“I think we just had a lot of energy, and in the beginning, they looked like they weren’t trying that hard, and then we made a ton of mistakes, but we fixed a lot of those mistakes,” Darion said. “In the second and third set we fell behind, but overall we did well.”

The third set played into the hands of the Spartans. With some miscues and miscommunication between the Eagles, the Spartans managed to grow their lead throughout the set, leading at one point 14-9. The Eagles re-emerged in the second half, with crucial plays by both David Stein and Harrison Beck to equalize 24-24. But their efforts were in vain as Mountain View managed to defeat the Eagles 27-25 and win the third set.

The Eagles will face Homestead in their next away conference match, tomorrow, March 31.