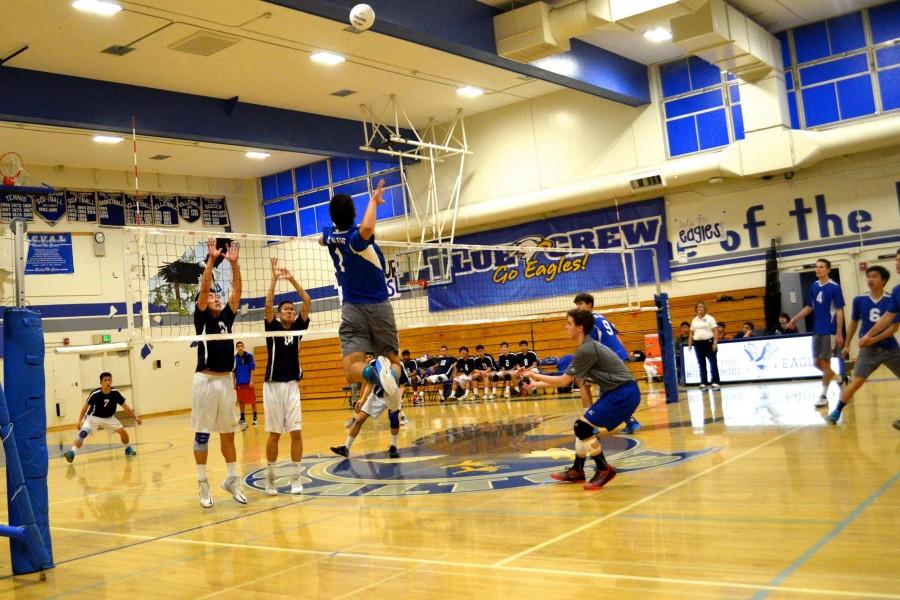 Senior Nathan Smith jumps up to spike the ball. Photo by Kunal Pandit.

The Eagles started out strong, playing very aggressively and tallying many kills. They jumped out to an early lead and never looked back, taking the first set 25-17.

In the second set, Los Altos tried to maintain the same aggressive mentality, but countless passing errors led them to a 15-8 deficit. After a timeout, the Eagles managed to mount a slight comeback, giving themselves a chance to win the second set. However, Leland’s commanding play coupled with Los Altos’ continued errors led to a 25-23 win for the Chargers.

The third set started off very tight, with the lead changing hands five times within the first 15 points was locked 9-9. The Eagles then began to retake control of the game, and jumped out to a 17-12 lead. This was followed by a 4-0 run response from Leland. Leland kept applying the pressure and managed to tie the game at 21 points. After a few spikes from each team, Los Altos was able to pull it out, 25-22 with a kill from senior Nathan Larsen.

“We were trying to get focused after winning the third set,” junior Darion Jusuf said. “We wanted to make sure we kept the momentum going forward so we kept pressuring them.”

Los Altos did in fact keep up the pressure as they jumped out to an 8-5 lead at the beginning of the fourth set. However, Los Altos was not able to maintain the lead as Leland came storming back with 6 straight points to take a 14-13 lead. After a timeout, Los Altos regrouped and took a 16-15 lead. Though Leland attempted to send the game to a fifth set, Los Altos proved too much to handle as they won 29-27 on a kill from senior Nathan Smith.

“We made sure we picked up a lot of balls, and in the end we pushed really hard and we got the win,” Darion said. “This win gives us back our confidence back and it reminds us that when we play to the best of our ability, we play at a very high level.”

You can catch the Eagles take the court tomorrow, Wednesday March 23, where they will take on the Monta Vista Matadors.