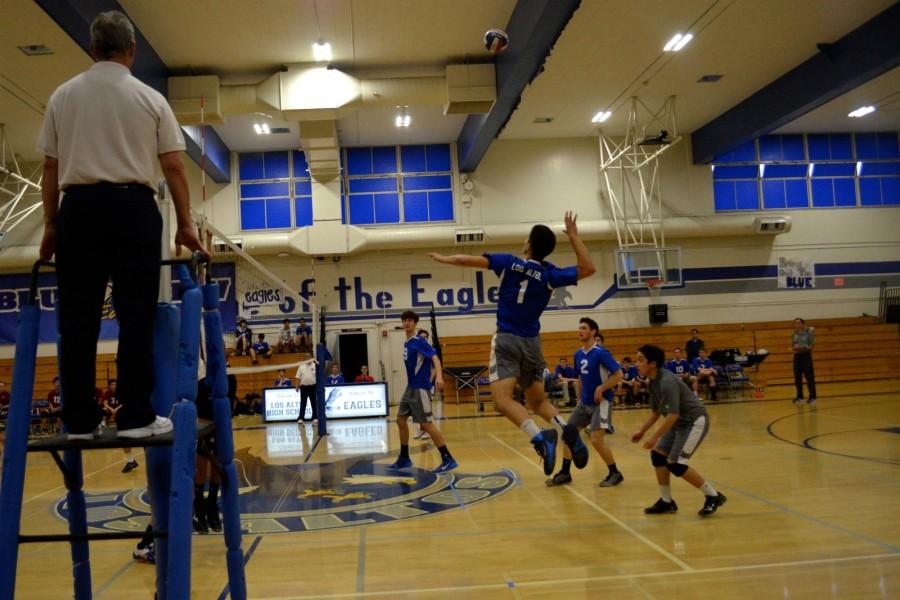 Senior Nathan Smith jumps for a kill. Despite taking a 2-1 lead, the boys volleyball team was unable to hold on against Cupertino and lost 3-2.

On Tuesday March 15, the Los Altos boys varsity volleyball team were defeated by Cupertino in their second league match of the year, falling 3-2.

The first set started with Cupertino going on a 3-0 run to take an early lead. However, the Eagles stormed back and kept the game level for much of the first set. Senior Nathan Smith made a key play on fake set-turned-hit to turn the tide of the game with Los Altos down 12-11. After the shot, the Eagles went on a run of their own to win the first set 25-20.

The second set told a different story for the Eagles. Cupertino once again started off hot and was leading 7-1 early on. But this time, Los Altos could not get into a rhythm and trailed by a large margin for the entirety of the set. Cupertino managed to hold on to their early lead and won the set 25-15.

The fourth set started off awful for the Eagles. Cupertino started off on a 9-4 run to take another early lead and managed to hang on for the rest of the set by a score of 15-25. The Eagles were plagued with miscues and communication errors that definitely hurt their chances of closing out the game in the fourth set.

“We came out strong as we did, although over the game we faded away,” sophomore Attila Delingat said. “Our energy went down and let our mistakes get to our heads. This has kind of been a problem sometimes like our passing and so it’s been really important to keep up our spirits.”

The fifth tie-breaking set began with Cupertino once again starting off with a lead of 1-4 to take control of the set. Although Los Altos hung close for the majority of the set, the Eagles could manage to maneuver a comeback and lost the set and the match. The final score of the set was 6-15. This was the Eagles’ third loss of the season.

“We want to focus on passing well and not letting all our mistakes get to our heads and keep up all our energy,” said Attila.

The loss puts Los Altos at 1-1 in league so far this year. They’ll return to the court tomorrow, March 16, when they travel to Lynbrook to play the Vikings.