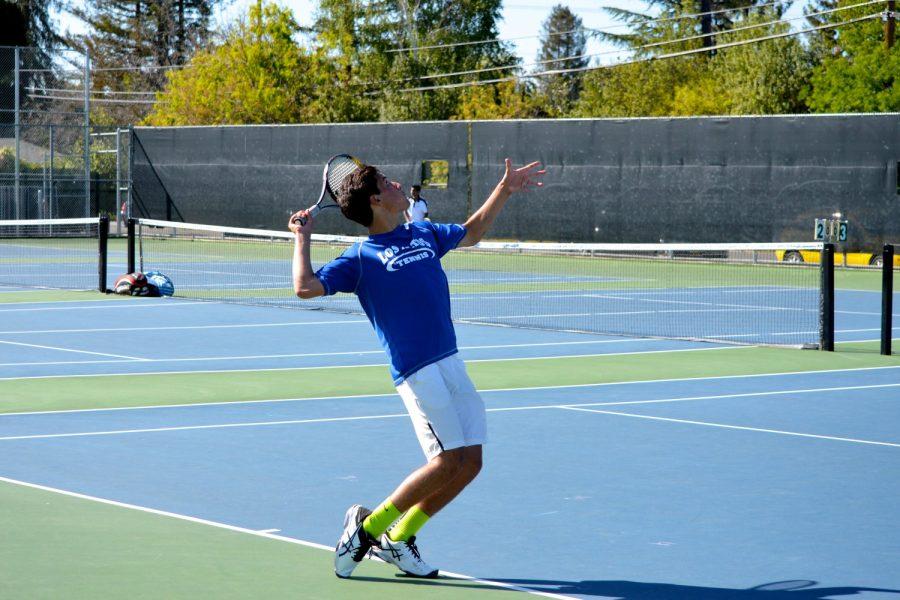 Junior Alec Jenab winds up to serve in practice. Despite a few tough losses, the boys tennis team boasts a 7-4 record and has SCVAL championships in its sights. Photo by Kunal Pandit.

The 2016 varsity boys tennis team is nearing the end of league play and setting its sights on league finals and CCS. With an overall record of 7-4 as of press deadline, the team aims to continue its solid performance on the courts through postseason play.

“I think that the season has gone pretty well,” sophomore Nick Cosgrove said. “Although we have had a few tough 4-3 losses, I believe that our overall record is positive meaning that we are one of the stronger teams in the league.”

One of the biggest challenges for the players is not the physical skills involved in the game, but the mental endurance and team compatibility, especially with doubles partners. And with the amount of games played in the season, mental resilience is one of the key aspects of having a stellar season.

“Many of us prepare mentally by either talking with our partners or getting mentally set by ourselves,” junior Connor Akiyama said. “With the individualistic nature of tennis, there isn’t much we all do together besides be there for each other to make sure there’s always someone to be moral support.”

A major turning point in the season was the California Tennis Classic Invitational, one of the premiere tennis meets of the season, which ran from March 3-4 in Fresno, California. One of the biggest obstacles for the team was preparing for the invitational.

“As a team, our greatest problem at the beginning was lack of general spirit,” Connor said. “After some league victories, hair-raising tiebreakers, and a huge victory in Fresno, our team fixed this because we had hope again. We had strong teams that we could stand a chance against and this was the biggest transformation in the team.”

The team-bonding experience through high-pressure situations improved the team chemistry and gave the boys a much-needed boost in confidence on the court.

“There was good team spirit from all the teams,” Nick said. “Usually, in alot of the league matches, there is not as much spirit…but [when comparing] the other teams we played against and our team, we were more hyped [at the invitational]. I think that was good practice before to have a few matches before the actual tournament to prepare. So, it was good mental preparation.”

Throughout the season, more close matches and heartbreaking 4-3 defeats have only strengthened the team’s spirit and resilience for both singles and doubles players. Teambuilding through the training and practice routine has elevated the team’s success on and off the court.

The season has highlighted the strengths and weaknesses of the team, which many players look to improve as the season continues. With SCVAL Championships today, improvement is the only thing on players’ minds.

“I think that the team’s main strength is in our consistency,” Nick said. “Most of the matches that we won were relatively comfortable and I think that this was due largely to the fact that all of the players on the team have a very solid all round game.”

Because the team is younger than usual, with only four seniors, they have had to focus on making sure everyone, especially the younger players, are prepared to perform well in high-pressure situations.

“I think that our main weakness is composure during high stress situations,” Nick said. “A handful of our losses were incredibly close and in the end only came down to a couple of loose points here and there. But I think that through the frequent practices, nerves are something the team is starting to worry less about.”

The team believes that its greatest strength, consistency, will boost its confidence and spirit through the SCVAL Championships. Whether it be on or off the court, the Eagles’ success will continue on, and the team will hopefully produce brilliant results for seasons to come.