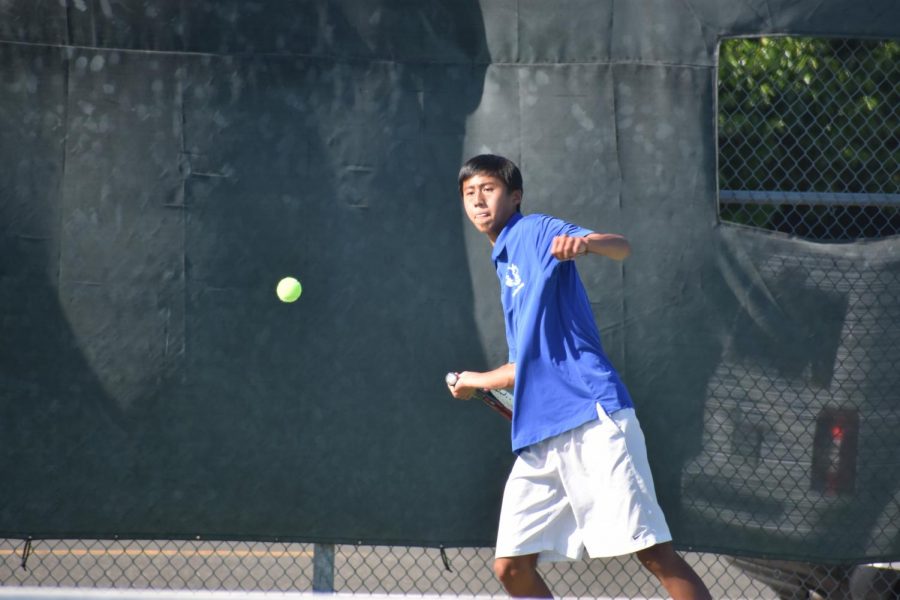 Senior Ethan Lowe prepares to return an incoming serve. In their most recent rematch against MVHS, the varsity boys tennis team won 6–1.

With their heads held high and spirit surging behind every swing, the varsity boys tennis team took to the courts on Tuesday, May 11 to face their rivals, the Mountain View High School Spartans. Fueled by their determination to continue their undefeated streak, the team beat MVHS with a final score of 6–1.

In their previous away match on Thursday, April 15 against MVHS, the team was able to secure a similar 6–1 victory, even though a majority of the players were on vacation. With the confidence of their former win and a full roster of players available, the team was able to ride a wave of positive momentum into their rematch against the Spartans.

“I felt confident that we had a really good chance at beating Mountain View,” head coach Thor Holt said. “With our whole team back, we matched up against them very well.”

From the start of the match, players came out swinging hard, allowing them to put tricky topspins on the tennis balls and use the court to their advantage. This ultimately made it much harder for their opponents to return the ball and was a testament to the team’s many hours of dedicated practice.

“I mainly focused on playing aggressively, since the players on Mountain View are quite good,” freshman Rohan Panchal said. “Attacking the ball and coming to the net were key in helping me win my match.”

However, what has contributed most to the team’s success against MVHS — and throughout this season in general — has been the young players on the team. These athletes, the majority of which are freshmen, have been playing in tournaments outside of school in addition to the team’s scheduled matches.

“We have freshmen who have consistently been playing in NorCal tournaments under these hot conditions,” Holt said. “Because of that, the heat during today’s match didn’t bother them at all.”

This key rivalry match showed the team the importance of having synergy, especially with the extensive amount of new players on the team this year. By bonding with one another, players are able to feel like they are a part of a broader tennis community, which, combined with their success, encourages them to play to their utmost potential.

“The team camaraderie and atmosphere have really helped me this season,” Rohan said. “Making new friends and building relationships are what make this season so meaningful to me.”

Moving forward, the team has set their sights on success in next year’s season, when they’ll be able to move up to the De Anza division. With an abundance of talented young players on their roster, consistent match experience will set the team up for a promising future.

“Giving the freshman time to play tournaments year-round will really help them improve,” Holt said. “If we do [that], it’s a winning formula.”