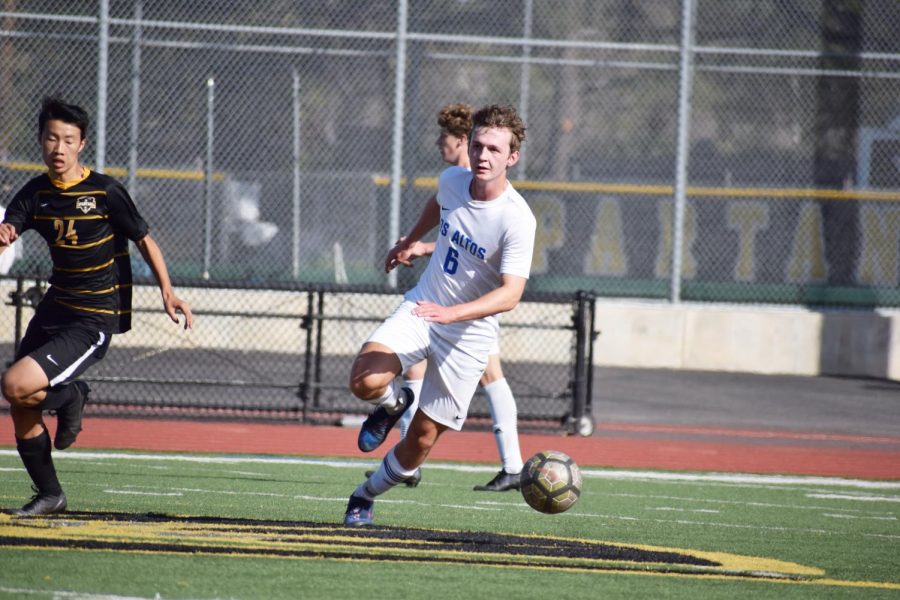 Senior Ethan Stirrup chases after the ball in a game against Mountain View High School on Tuesday, April 6. The boys soccer team was forced to cancel their last game of their season after a member of the Gunn team tested positive, as the LAHS team had been in close contact with the athlete while he was contagious.

Due to COVID-19 exposure, the boys soccer team’s final game and senior night — both scheduled for today against Palo Alto High School — were canceled yesterday.

On Friday, April 16, Los Altos High School played a game against Gunn High School as scheduled. A week later, the team received an email from Principal Wynne Satterwhite, which stated that a player on the Gunn team had tested positive for COVID-19.

The LAHS team came into what is defined by the Centers for Disease Control as “close contact” with the Gunn players: (a.) They were within six feet of someone with COVID-19 for a total of 15 minutes or more over a 24-hour period. (b.) They had unprotected contact with the body fluids and/or secretions from someone with COVID-19.

LAHS players are not allowed to return to in-person school until they show proof of a negative test even if they do not have symptoms. Tests were offered this afternoon on campus to allow the team to return to school and extracurriculars as soon as possible.

“I, along with the rest of the seniors, feel like we were robbed of our last game,” senior Wyatt Conroy said. “I feel that the decision to cancel was unjust, considering the contaminated player didn’t come from Los Altos, and both Gunn and Homestead were able to finish their seasons.”

Santa Clara Valley Athletic League Commissioner Brad Metheany and Paly Athletic Director Nelson Gifford said that the season could not be extended to allow the team to play their final game, nor did they wish to reschedule.

The team will still have an outdoor gathering to celebrate their season and recognize their seniors once it is safe to do so.