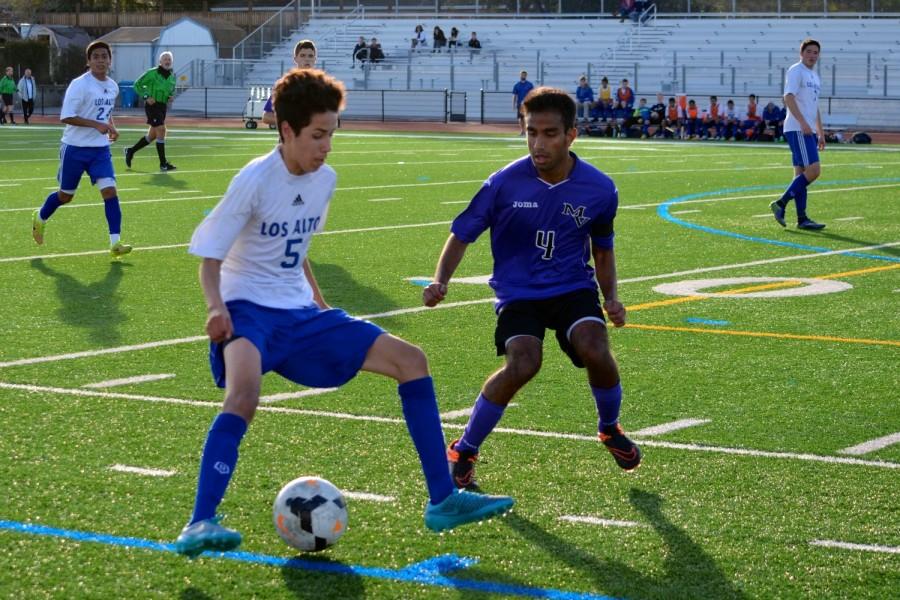 Junior Edwin Hernandez dribbles the ball past a defender. Photo by Kunal Pandit.

On January 25, the Los Altos varsity boys soccer team clashed against Monta Vista. Despite yielding a goal at the very start of the match, then allowing a second, Los Altos was able to recover from a 2-0 deficit  and tie the game.

Monta Vista was first to kickoff. They started aggressively, nearly scoring off of a penalty kick in the first few minutes, but the Eagles’ defense held them off.

Both teams fought to maintain possession, with Monta Vista continuously pressuring the Los Altos defense. Six minutes in, Monta Vista scored first on a shot that barely snuck under the crossbar.

“I felt pretty bad because the goal came on my side of the field, so I felt responsible,” junior defender Albin Mollerstedt said. “I knew that [Monta Vista’s] team was dangerous, so we could not be giving up easy goals like that if we were going to win.”

The Eagles bounced back from the initial deficit with an immediate increase in possession and offensive. They worked hard to beat their opponents to the ball, fighting for every header and efficiently moving the ball down the field with some well-spaced passes.

Monta Vista gained another free kick, nearly resulting in a second goal, but the Eagles’ goalkeeper, sophomore Matt Lopez, snagged the ball as it bounced above his head.

Los Altos retaliated with several more scoring chances. After a well-placed cross, the Monta Vista goalie slammed into a Los Altos forward to grab the ball, resulting in a yellow card.

Los Altos continued to dominate possession through the first half, but was unable to generate good shots on net. In contrast, Monta Vista had fewer opportunities, but occasionally came unsettlingly close to scoring.

Finally, Los Altos gained an opportunity to score. With the opposing goalie fallen to the ground and the ball sitting in front of the goal, the Eagles’ next shot was barely blocked.

Los Altos didn’t relent, and was awarded with a breakaway that came inches from scoring. Unfortunately, the referee called a foul on Monta Vista despite Los Altos already having a seemingly clear advantage in the play, denying the Eagles a breakaway chance and bringing the ball back for a free kick.

Despite refusing to give up, Los Altos suffered another goal from Monta Vista. After diving for a save, Matt was on the ground and missing a shoe. Monta Vista easily nudged the ball out of our defenders’ reach into the net minutes before the first half came to an end.

“A few of the guys on the team talked [about] how hard we had worked to get to where we were and how we did not want to give it all up today,” Albin said. “I think it was a complete change in personality.”

During the second half, the Eagles gave it their all. Many noticeable runs brought Los Altos inches away from scoring.  Moments into the half,  the Eagles took a corner kick that was connected with a shot which unfortunately flew high above the goal.

However, midway through the half, the Eagles gained a surge of hope. Monta Vista was called for a handball inside the goalie box, giving Los Altos with a penalty shot. Senior midfielder Bryan Giron beat the Monta Vista goalkeeper, putting the Eagles squarely back in the game.

“I think we did a really good job of bouncing back after halftime and fighting for the comeback,” senior defender Joe Kull said. “It’s so easy just to give up and and put our heads down but not a single person on the team did that.”

However, the Eagles saw their opportunity to overwhelm Monta Vista. Needing only one goal to tie the game, Los Altos continued to increase pressure.

The following few minutes were very intense. Monta Vista barely held on to their lead as the entire Los Altos surged forwards to maintain the offensive.

Momentum began to sway on a hectic sequence of plays. A foul was called on Monta Vista just outside of the goalie box, but the play was delayed for an injured Monta Vista player. The pause lasted several daunting minutes as players on both teams anxiously fidgeted on the field.

Finally, the game resumed with a bang when the kick placed the ball dangerously close to goal. A scuffle broke out as Monta Vista failed to safely clear the ball from their side of the field. The ball slowly drifted away until yet another run brought it straight back to the box.

Several players on both ends fought to gain possession. At this point in the game standard positions seemed to be warped, with even Los Altos defense surging to induce pressure while Monta Vista coiled back in defense.

Los Altos completed the comeback just minutes later, when an Eagles’ cross slipped out of the Monta Vista’s goalie’s hands and was hammered into the goal by Joe.

“It felt almost unreal. I barely remember it,” Joe said. “The ball came to my feet and I just put it in. It was such a great feeling seeing how happy the whole team was and it felt awesome when I was at the center of the cheering.”

While clearly relieved, Los Altos stayed strong until the very end. With only minutes left in the game, the Eagles still came close to scoring. Monta Vista gained one last chance to regain the lead with a free kick, but the game ended seconds after with a final score of 2-2.