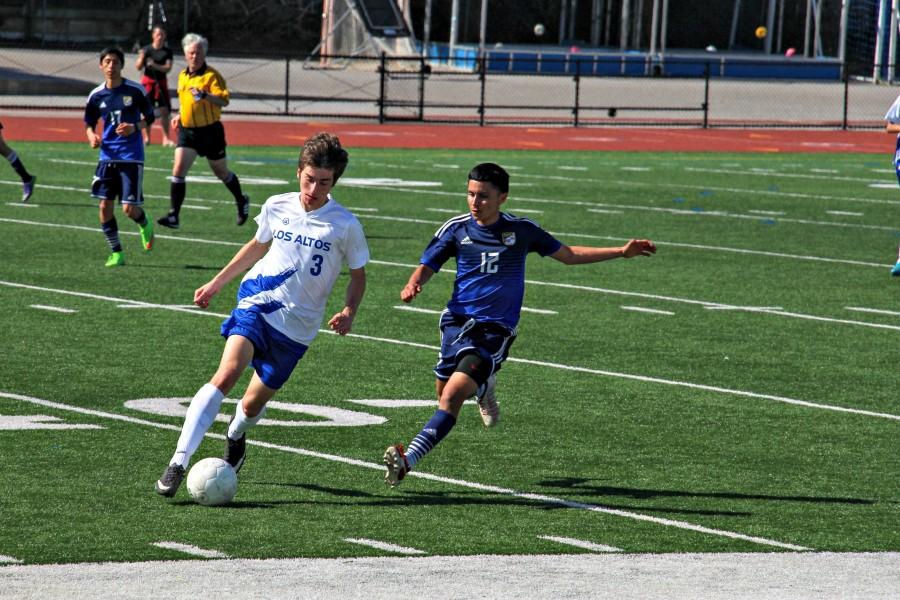 Senior Joe Kull dribbles the ball near a defender. Photo by Michael Sieffert.

For the first time in four years, the boys soccer team made it to the Central Coast Section playoffs. Soaring past the competition in the first round of play, the Eagles took home a 4-1 win over Westmoor on Wednesday, but they were unable to defeat the Eagles of Everett Alvarez High School today, in the quarter-final match.

As they stepped onto the field and prepared themselves for the match ahead of them, the team was conscious of what they had to do in order to earn the result they wanted.

“We knew today was going to be a hard game,” senior co-captain Matt Carroll said. “[Everett-Alvarez] played in a tough division and our goal was to come out strong.”

After the whistle blew to begin to match, Los Altos did their best, but they couldn’t quite find the unity they needed. In the opening minutes, a pattern emerged in the style of play Alvarez was going to use to match up against Los Altos. Their strategy was to be physical and send the ball deep into the opposing half for their forwards to chase. And just six minutes into the game, Alvarez’s game plan proved successful as a ball sent over the midfield caught the Los Altos goalie off his line, allowing an attacker to drop the ball over his head and into the goal.

Things would only get worse for Los Altos. The game became sloppy, and just six minutes after they had scored, Alvarez went up 2-0 on a play resulting in a very similar miscommunication between the Los Altos keeper and their defensive line. There was a shift in confidence as Alvarez began to move the ball, taking control of the game with each pass they completed.

But Los Altos wasn’t going to quit so easily. With ten minutes left in the first half, the team was able to build from the right wing and move the ball into the penalty area, setting up a two-on-one battle against the keeper. As the ball made its way into the area, Everett’s keeper came up with a clutch save as he sent the ball wide and denied Los Altos their first real goal scoring opportunity. As the final minutes passed, Los Altos generated multiple shots that just missed their mark; a free kick 15 yards outside the goal box taken by co-captain Nicky McConnell sent over the goal, a couple crosses by senior Ryan Kull from the right wing saved by a steadied defender and a diving keeper and a ball picked up by Matt in the penalty area went just wide of the goal.

As the whistle blew to signal the end of the first half, Los Altos was struggled to click, and a very familiar scene began to unfold. Earlier in the season in their match against Monta Vista, the Eagles went down 2-0 at halftime and came back in the second half to win it all. History had the chance to repeat itself, and Los Altos did their best to make sure of it.

As the second half unfolded, Alvarez maintained possession of the ball, but there was a drive on the Los Altos side that wasn’t going to let up. Senior Keith Bohrer had moments of brilliance as part of the defensive line, denying Everett players to advance the ball past the half and into their danger zone. Though the score remained the same, around the halfway mark of the second half, Los Altos slowly took the control of the game and began to move the ball with purpose and confidence. As a unit, Los Altos was able to keep the ball in their offensive half, and their relentless pressure was forcing mistakes by their opposition that they capitalized on.

Then, with twelve minutes left in the game Ryan Kull drew a penalty after taking on a couple Everett defenders in the box. Senior Bryan Giron converted, putting Los Altos on the scoreboard and closing the gap to one. The momentum was fully on their side as they continued to press the Alvarez defense. With the clock still running, Alvarez did its best to try to run it out, taking their time at every throw in, goal kick and free kick they could. Still, Los Altos wouldn’t give up.

With four minutes left in regulation,  Ryan got the ball inside the penalty area and found himself with a chance to tie the game. His shot was parried away by the Alvarez keeper, but there was Matt waiting to head the ball in and over the goal line to level the score at 2-2.

The final minutes of the game flew by in a frenzy where neither team was able to finish the rushed opportunities they created, so over-time it was, and Los Altos knew what they had to do.

“We just said to each other that we [needed] to keep up how [we were] playing,” Matt said. “We dominated the entire second half, they barely touched the ball.”

When the first ten-minute overtime period started, Alvarez resumed aggressive and overly-dramatic style of play that had worked so well early on. Los Altos countered nearly every attack, but the ball just didn’t seem to leave their half of the field. Then, with two minutes left in the half, Alvarez earned itself a corner kick, and an unchallenged ball driven in from the left flag went straight to an attacker, who buried it to take a 3-2 lead.

The half came to an end and a brief two minute rest was allowed before the second overtime period began. Los Altos had ten minutes to make something happen, but every time they approached the goal, they came up short, and eventually the clock ran out on their season. It was a hard fought battle, but the final whistle eventually blew and the game ended with a final score of 3-2 in Everett’s favor.

Yet, even as Los Altos walked off the field for the last time this season, they had nothing to be ashamed of. Spirits were low, but that will eventually fade and in time, pride will replace it.

“We’re all really proud of each other,” Keith said. “We all clicked really well the whole season, [and] the team talked about how there hasn’t been a Los Altos team with this good a record in ten or so years. There’s isn’t going to be a single CCS team with a better record than us at the end of the day… they’re small victories and even though there’s the big failure we’re all proud of each other.”