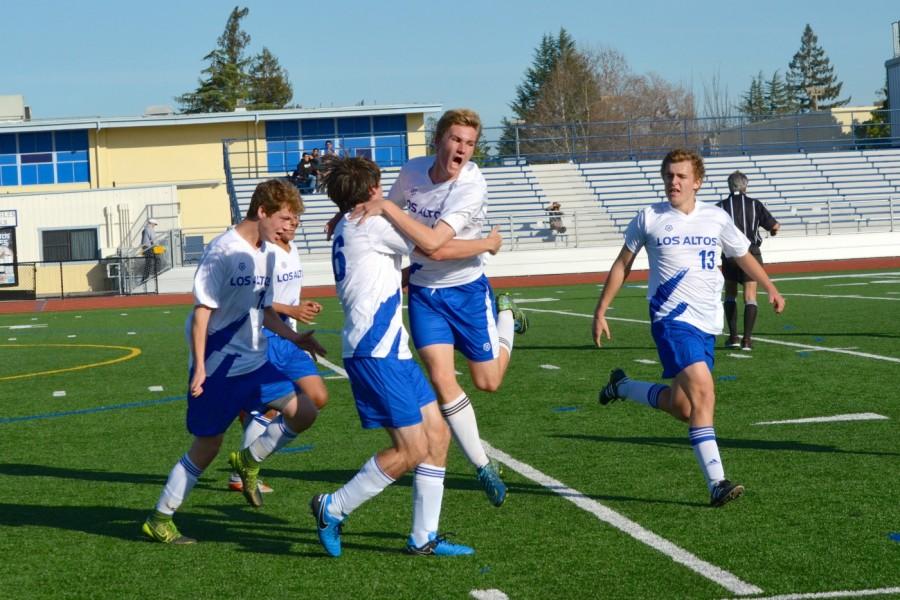 The boys soccer team celebrates a goal in its CCS first-round win over Westmoor. After an undefeated season, the team will move up to the De Anza League next year. Photo by Kunal Pandit.

A year can make a huge difference. Last season, the boys soccer team had one of the worst seasons in school history, winning only two games in league play, finishing in last place and demoted from the De Anza division to the lower El Camino division. This year, the team finished the league season undefeated, just one point out of first place, and will be returning to De Anza next year with hopes of continuing their success.

The Eagles finished with a record of 9-0-3 in league play, and 15-2-4 overall. The team also had success in both preseason and postseason play, winning the annual Christmas Cup tournament and qualifying for CCS for the first time since 2012. The team entered CCS as the third seed, hoping to make a run into the later stages, but was eliminated in the second round in a 3-2 overtime thriller against Alvarez on Saturday, February 27.

“CCS was a great experience just knowing that we were past playing against weak teams, as only above average teams [qualified for CCS],” junior defender Albin Möllerstedt said. “It felt good to be among the top teams, and competing at a higher level than we had during the season.”

The Eagles contribute these increased successes to a change in team mentality, from a more individually focused style of play to one that encourages passing and teamwork. The team also focused more on individual accountability: showing up to practice and being ready and focused on game-days.

“This team had a lot better chemistry than the previous years,” senior co-captain Matt Carroll said. “We all filled a role in the team and everyone was happy to do their job… last year a lot of the seniors tried to be the hero and score all the goals, whereas this year we had a very even spread.”

The impact of this team-based style of play can be seen on the scoresheet, as 12 different Eagles contributed at least one goal during the league season, the most of any team in the league. The large senior class on this year’s team initiated the change in attitude by involving the younger members of the team more and making sure everyone felt like a part of the team.

“Last year the seniors did not really mix themselves with the juniors and sophomores,” Albin said. “This year, the seniors really focused on getting all the younger players involved as well and we had a really great group of guys who worked well together.”

This increased camaraderie between players led to the team winning more games this year than in the last two years combined. The Eagles hope to keep that positive attitude going into next year in the De Anza division, and avoid a quick return to the lower division. The team will lose many key players to graduation, but it has many young players with enough experience starting for varsity to lead the team to continued success.

“We have a good core of juniors who played on varsity this year, and many good players coming up from junior varsity,” Albin said. “I think we will be able to stay up in De Anza and compete for a high spot.”

Next year’s team will face a tough challenge in attempting to place highly in the De Anza division and avoid relegation while still keeping the selfless team mentality that allowed this year’s team to succeed. Maintaining this team-oriented attitude will be harder for the team next year, in the tougher competition that comes with returning to the De Anza division. The stronger opposition combined with the loss of many important players and leaders could impact the team, but as of now, they seem likely to continue their success in De Anza.

“It will be a tough year for them, [since] they will be losing seven starters from this year’s team,” Matt said. “However, I’m confident that the returning players will be able to step up as leaders and lead the team to another successful season.”