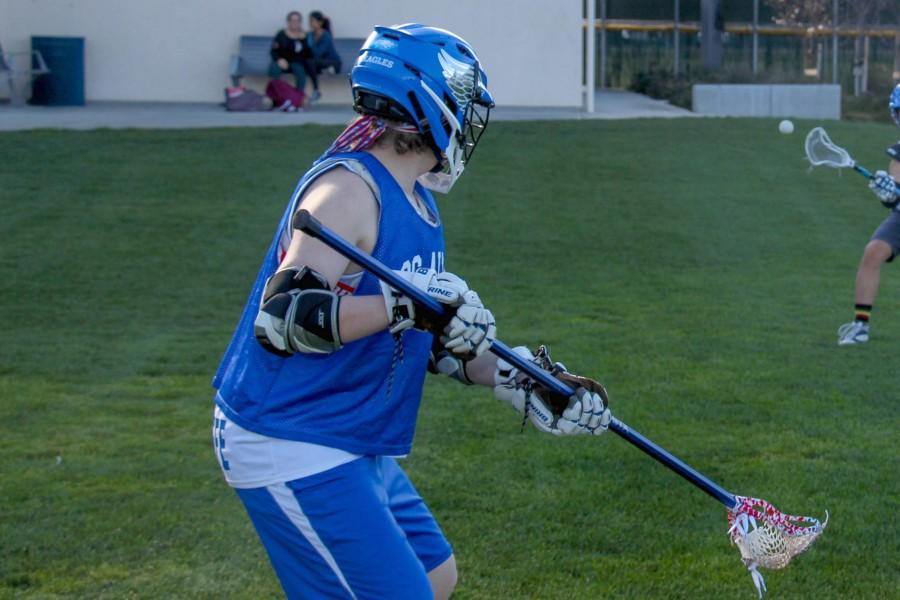 Junior Brendan Radcliffe catches the ball in practice. The lacrosse team hopes that by being fundamentally sound, it will have a successful season. Photo by Michael Sieffert.

As of press deadline, the varsity boys lacrosse team is 1-1, with the games being polar opposites. The first against Newark Memorial was taken by Los Altos in a crushing 15-5 victory, while in the second, the Eagles were defeated by Saint Francis with a final score of 14-3. The team has adopted a new practice routine this season, so these erratic scores may be an indicator of future performance if this new program is unsuccessful.

The new preseason practice routine allots more time and effort on refining the team’s ball handling and coordination, in hopes that this emphasis will boost the boys’ performance and win percentage. Game knowledge and play making is currently taking a backseat as the team hopes these talents will be developed more naturally over the course of the season.

“In terms of stick skills, I don’t think we’re that bad,” senior defender Stephen Foulke said. “But since we focused a lot of time developing those skills, we sort of neglected going over plays and game time scenarios. I think it’s easier to get the plays down than it is to get the skills down, so it shouldn’t hurt us all that much.”

Similarly, offensive focus has trumped over defensive training, playing to the strengths and leadership skills of the boys, and bringing out the best of their talents.

“I believe that focusing on offense as a whole instead of individual plays has been a great choice.” senior defender Cole Botsford said. “While learning our offense, we have had different players implementing play calls, which makes our offense more versatile than learning a few complex plays.”

However, after many of the older, more experienced players graduated last year, the varsity team has been left with many new faces. The relatively young team has new players of all different skill levels forcing the team to make adjustments to their playstyle. Nevertheless, the team is optimistic that through the training of the preseason these newcomers will become valuable assets to the group.

“Many of our players are new to the game, so that falls more on the weakness side, but that’s a short term problem,” Stephen said. “Our defense is strong and we have a deep bench.”

Obviously, many of the boys dream of becoming CCS Champions and proving themselves the best of the best by the end of the season.

“We are working toward everyone [getting] better throughout the season, but mostly we want to win league and all of our non-league games,” Cole said.

No matter the outcome, however, the members of the lacrosse team will be proud as long as they play a good season.

“We decided to define success this year as ‘unselfishly giving our best everyday,’” Stephen said. “Coach [Kevin Arabejo] decided that’s our motto, so if we do that then we are satisfied.”