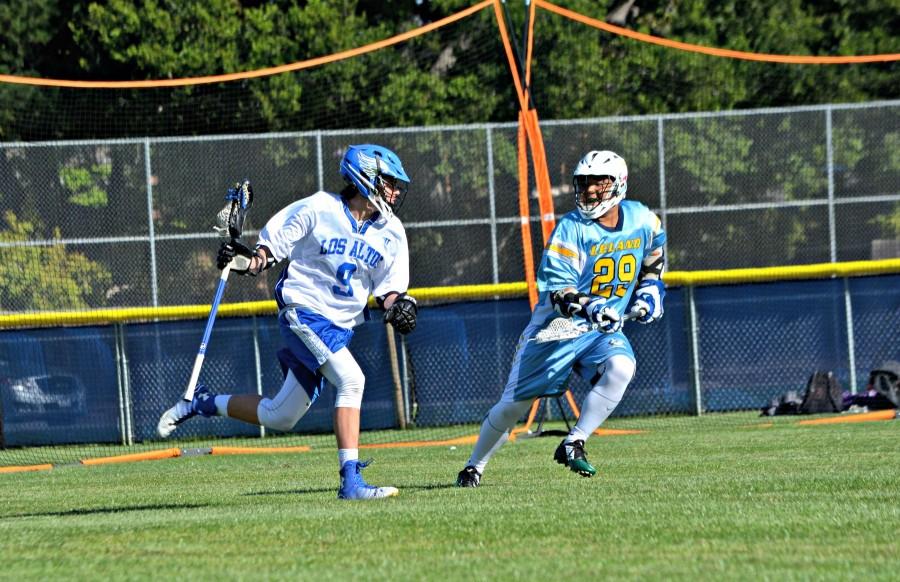 Looking to pick up their first league win, the boys lacrosse team more than showed up to play against the Leland Chargers today, as they controlled the game both defensively and offensively; winning 14-1.

“We proved to ourselves that we can bounce back from a hard loss and not let [the loss] affect how we play our game,” junior Brendan Radcliffe said.

After winning the opening faceoff, Los Altos started out aggressively pushing the ball up the field. This aggressive mentality payed off right away as junior Tristan Mori-Salone scored only 40 seconds into the game. The Eagles kept up their aggressive mentality with a shot from sophomore Hayden Hofman and a rebound goal by junior Jordan Jenab coming just two minutes later. Leland tried to push offensively, but the Eagles were able to contain them; holding them to two shots the entire quarter. After a dominant defensive quarter, the Eagles led 3-0.

Los Altos started the second quarter with the same attacking mentality as they got another early goal, this time by sophomore Hayden Hofman. Once again they were able to hold Leland scoreless as their defense proved to be too much for the Chargers to handle. A late surge by Los Altos which included two goals in the last minute had the Eagles up 8-0 going into the second half.

The story of the third and fourth quarters were much of the same as Los Altos dominated possession, holding Leland to only four shots in the entire second half while keeping on the offensive. Junior Ryan Young helped keep the scoring up for Los Altos with all three of his assists coming in the second half along with one of his three goals. Though the Eagles did not manage to maintain the shutout, they still had a commanding performance, winning 14-1.

“Our mentality was to be relentless, finish our game the way we started it, and keep our aggressiveness up,” Ryan said.

The best defense is a good offense, which really showed in the Eagles’ performance today as they kept their aggressive mindset up from the first whistle and never gave Leland enough opportunities to have a chance of coming back.

The next game for the team will be against Palo Alto on March 31. You can catch the Eagles take the homefield next on April 9 against Valencia.