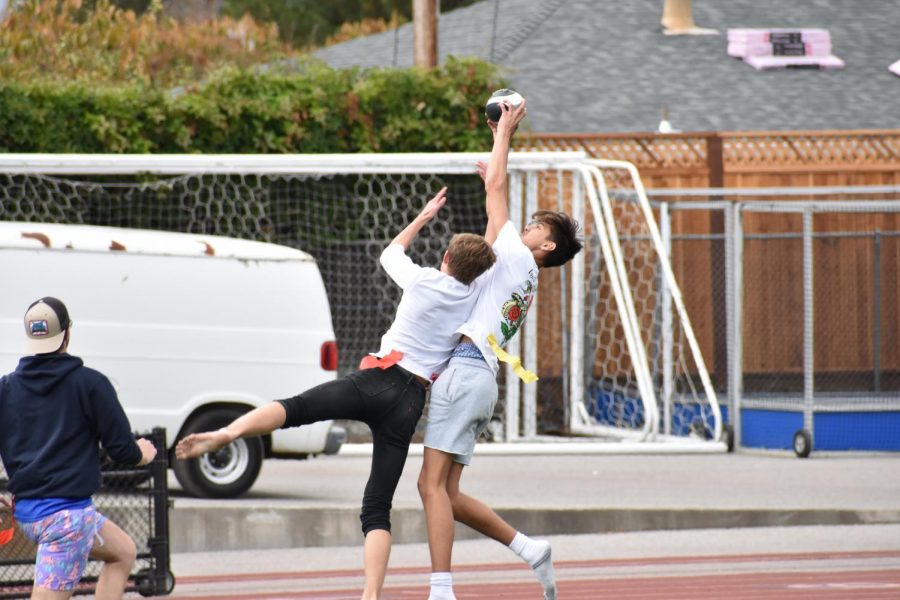 Sophomore Jake Skaggs leaps to catch a pass as the seniors desperately try to stop him.

By Cameron Cox, Amid Najmi, and Barrett Wong

Intensity, professionalism, seriousness–everything that the Los Altos boys flag football tournament is not. Instead, boys from each class came out to the field to have a fun time showing off their athleticism—and swagger—to their peers from November 13 to 15.

For the first game of the tournament, the defending champion junior class, who won the tournament as sophomores last year, faced off against the wide-eyed and inexperienced freshmen. The freshmen were quite disfavored, yet the match was far from a walk in the park for the confident juniors. In fact, the juniors narrowly took the win as the final score was 7-6.

Starting the game, bass pounding rap music blared through the loudspeakers as the boys cockily ran through warmups. After a stimulating row-sham-bo, 40 spectators edging to the front of their seats, the victorious freshmen whooped at receiving first.

The juniors started out strong in the first half, asserting their dominance over the freshmen. Junior Ethan Alpfelberg contributed to a key play by leaping to intercept freshmen Dre Caputo’s long pass. Following the conversion, varsity football player junior Aaron Parker lobbed a pass over the heads of the scrambling freshmen into the waiting hands of teammate Brock Susko. After the juniors made their PAT, the freshmen experienced a vibe check as they realized they needed to up their game.

Maybe it was the hype of Aminé’s rap telling the freshmen to “Reel it In” or perhaps it was the taunts of entertainingly biased commentator junior Jimmy Dessouki; but whatever the reason, the freshmen gave their all to score in the second half of the game. Freshman Boden Sirey threw the scoring pass to freshman Ben Bacchi, to the amazement of the scarcely filled stands.

After the touchdown, the juniors fought to regain their dignity as they blocked the freshmen from making the attempted two extra points. With the final score of 7-6, the juniors came out victorious, as expected, but with their arrogance tarnished by the unfortunate touchdown scored on them—by freshmen, no less.

“Honestly when it comes down to it, we’re still the champs,” junior Gavin Fairey said when confronted about the freshmen incident.

Sophomores versus Seniors
Tensions ran high the following day as the senioritis-plagued seniors faced the eager sophomores. The game was a storm of calls with flags raining down on both teams for various offenses ranging from running out the clock to being offsides. The sophomores triumphed 14-0, leaving their upperclassmen opponents quaking in their boots.

In the first half of the game, sophomore Jake Skaggs easily snatched the ball out of a high pass by senior Hugo Biczek, eliciting cries of disbelief from the small spectating crowd. In the sophomore drive, sophomore Mingaang Park threw the scoring pass a whopping 30 yards to Jake. Mingaang then successfully ran the ball for the two-point conversion play to put the score at 8-0.

The sophomore powerhouse team gained momentum in the second half, starting off with a sassy trick play. Mingaang threw the ball behind the line of scrimmage to Aidan Brenner, allowing Aidan to once again throw, this time forward to Jake.

The seniors were “yet to touch the ball” according to Jimmy, as the sophomores scored the final touchdown of the game with Mingaang running a quarterback sneak into the endzone. Sadly, the seniors lost to the underclassmen with a final score of 14-0.

“I was a little disappointed with our senior showing,” spectator senior Michelle Odnert said. “We could have put in a lot more effort. Come on, we’re seniors. This is our time! But it just isn’t.”

Sophomores versus Juniors
The final showdown on Friday, November 15, was between the reigning champion juniors and the haughty sophomores. You could practically hear the old Western song playing in the background as the two classes faced off. Both sides showed their fierce determination throughout the game as neither team would allow the other to get the upper hand. Yet in the final moments of the game, the juniors were finally able to score, and at the end of the madness the scoreboard read 6-0.

The intensity peaked at just three minutes left in the game and six yards to the endzone. Aaron made a desperate leap into the air to catch junior Charlie Kinne’s pass, but was knocked down to make the pass incomplete. The sophomores then took a frenzied possession, hoping to score in the nick of time. Yet Mingaang’s pass was suddenly picked by junior Brock Susko, switching the possession to the juniors once again.

With the seconds ever so quickly ticking by, the juniors pulled through to create an opening for junior Gavin Fairey, who caught the hail mary pass thrown by Charlie. The sophomores were left to nurse their wounded pride until they are able to challenge the two time champions again next year.

“It is not sophomore season,” spectator junior Justin Rosen said. “I have more faith in the freshmen.”

The girls flag football tournament takes place this Wednesday through Friday. Make sure to check it out and cheer for whoever you have faith in.