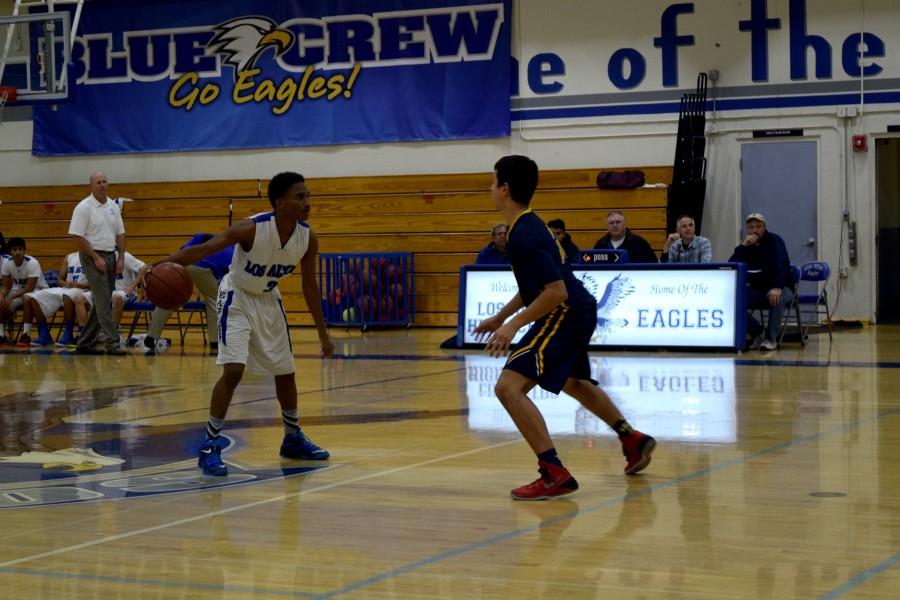 On Monday, November 30, the Eagles triumphed over the King’s Academy Knights 58-50, earning them a fresh win to the beginning of the season.

The game started off lethargically, with both defenses controlling play. The Eagles struggled to break the Knights’ full court press, and on the other end, Los Altos’ zone defense held the Knights to only fastbreak points in the first quarter. However, five minutes into the quarter, the Eagles were up 9-3, and after a quick succession of points, found themselves leading 17-7 thanks in large to two three-pointers by sophomore Matt Eberle.

The Knights managed a respite with a basket five seconds before the end of the quarter, leveling the score slightly to 17-9.

The beginning of the second quarter saw a resurgent Knights offensive, which wore down the Eagles with two steals and helped tie the game 24-24 four minutes into the quarter. Two sets of free throws for the Eagles, including one by sophomore Nolan Brennan, who finished the half leading the team with 13 points, pulled them ahead slightly 28-26. However, a Kings 3-pointer gave the Knights their first lead of the game since the slight lead in the opening moments, and the half ended with the Eagles trailing by one point.

After halftime, both teams aggressively stepped up their offense, resulting in three ties, each two minutes apart. The score for the third quarter ended up a heart-poundingly close 43-42, favoring the Eagles. By the fourth quarter, consecutive three pointers by Matt, among other shots, gave the Eagles a 14 point lead with a minute and a half left. For a moment, the Knights mounted an impressive comeback, netting eight points in under a minute to round out the score 56-50.  After a series of last-minute timeouts called by the Knights, the Eagles converted a pair of free throws, sealing the win 58-50.

The Eagles’ next home game will take place on December 14 against San Jose at 7 p.m.