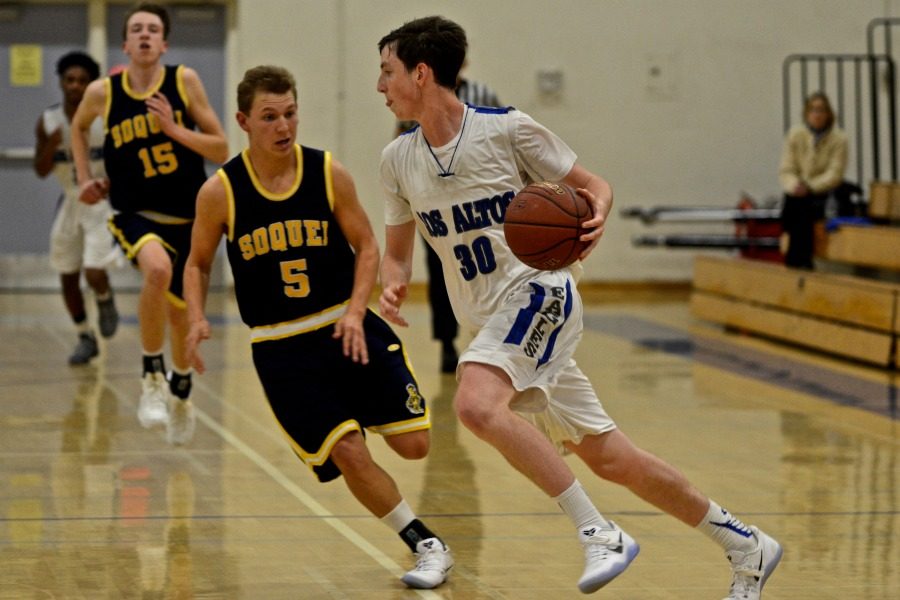 On Wednesday, November 30, the Varsity boys basketball team won their second game of the season beating the Knights of Soquel High School with a score of 46-32.

After starting the game down by four, the Eagles quickly battled back to build a comfortable lead of 14-7. Junior Matt Eberle began his scoring spree with a big three-pointer, followed by a series of easy breakaway shots from junior Nolan Brennan, senior Luke Enthoven and senior Ahmad Washington.

However, Soquel won the second quarter, scoring 13 points to the Eagles’ 9. Matt scored two back-to-back layups for Los Altos, right before Soquel scored two points from free throws. But with 3:40 left in the quarter, Soquel was able to capitalize on Los Altos’ faltering defense and went on a nine-point streak, closing the score gap to 23-20 for Los Altos going into halftime.

Los Altos’ fast ball movement was very evident in the third quarter. Ahmad made the first shot of the quarter with a flawless three-pointer, but Soquel immediately responded with a quick shot in the very next possession. Luke was a key defensive player in this quarter, rejecting two layup attempts. Los Altos continued to breakaway, scoring six more points to add to their score of 34-25.

The Eagles played their best offense in the fourth quarter. Matt and junior Simon Heck each scored a layup within the first two minutes of the quarter. Los Altos’ defense limited Soquel to scoring only 5 points in the quarter—all from free throws. Luke, Ahmad and senior Aidan Kelleher contributed two points each before Matt concluded the game with another three pointer. The Eagles beat the Knights with an overall score of 46-32.

“This was a comfortable game for us,” Luke said. “But even in [easier] games we always try to play our hardest to better ourselves.”

Head Coach Trevor Naas was satisfied with the win but said the team still has to improve in their overall cohesion for future games.

“What we’re trying to work on is the team concept,” Naas said.  “We’re trying to get these guys to believe in sharing the basketball and working together, and when we do that we get a shot to be very good.”