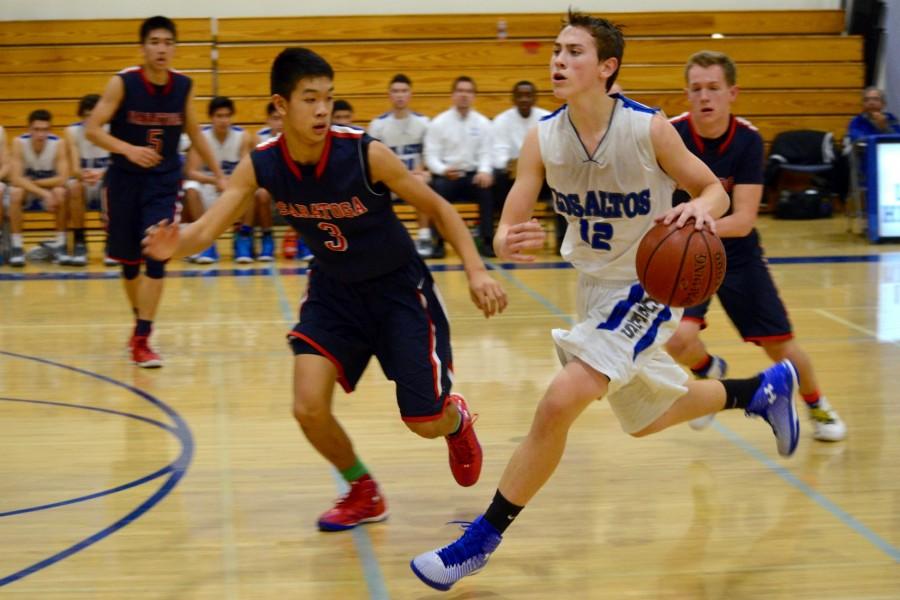 Sophomore Nolan Brennan drives past a Saratoga defender. He led the team with 17 points as the Eagles beat the Falcons 50-45. Photo by Kunal Pandit.

The boys basketball team won a gritty, hard fought game against Saratoga, stopping a Falcon comeback and earning a 50-45 victory.

The Eagles started the first quarter slowly, letting Saratoga jump out to a 7-0 lead and  not getting on the board for the first three minutes. However, sophomore Nolan Brennan nailed three-three pointers in a row to tie the game at 9-9 with 4:18 remaining. A minute and a half later, Kenneth Hammel made a layup to give Los Altos their first lead of the day at 11-9. Baskets by junior Tommy Andrews and sophomore Simon Heck stretched the Eagles’ lead, and Los Altos ended the quarter leading 16-11.

The second quarter was rocky for both offenses. Los Altos didn’t score until a free throw by senior Bailey Thayer made it 17-15 with 5:05 remaining. Two free throws from junior Ahmad Washington and a layup from Nolan constituted the entirety of the Eagles’ offense in the quarter. However, Los Altos’ defense kept them in it. While the offense only scored five points, the defense held Saratoga to eight, and Los Altos took a 21-19 lead into halftime.

“I think that we could have played harder,” sophomore Jack Shab said. “We started off slow… [we came] back from the deficit, but we need to start the game stronger. [The strength of the team was] just the energy. Everyone who played went 100 percent.”

Both teams came out firing in the second half, but the Eagles started to pull away with quick passing and movement to find easy layups and wide open jump shots.  Sophomore Matt Eberle hit a three-pointer with 3:35 remaining to make it 30-23 Los Altos, and after a Saratoga free throw, Simon scored to give the Eagles their largest lead of the day at 32-24. However, the Falcons started to come back, ending the quarter on a 6-2 run, and Los Altos only led 34-30 going into the fourth.

Both teams looked to bring it home in the final quarter. Saratoga completed the comeback it had began before the break, tying the game at 34-34. Los Altos, led by Nolan and Ahmad, was able to retake the lead and stretch it to 47-39 with 1:32 remaining.

Saratoga refused to quit. Two three-pointers in 20 seconds all-but-eliminated the Eagle lead, and suddenly Los Altos was only up by two. However, the Eagles were able to pull it out with Nolan and Ahmad, who led the team with 17 and eight points, respectively, hitting keyfree throws to seal a 50-45 win.

It was the closest game Los Altos has played so far, and the way the players responded said a lot about the team.

“It was really fun,” Nolan said. “I thought we kept our composure throughout the game and got the win. We shoot really well and I think we ran our offense well. [Next game] we need to work on our press and getting more turnovers from the other team.”